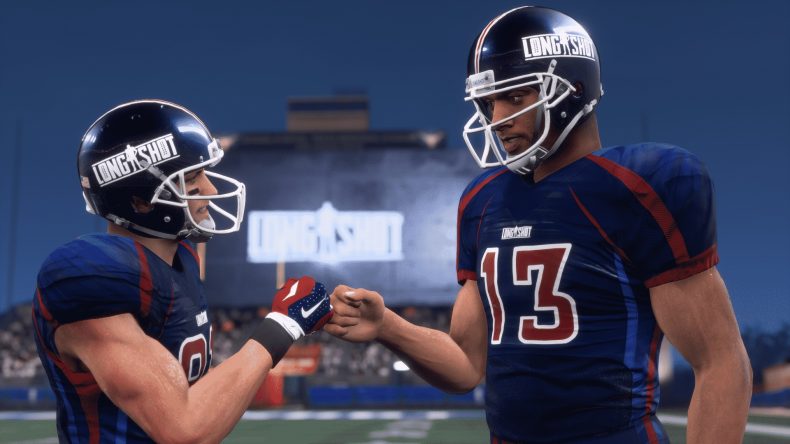 For those of you not too familiar with the sport of American Football, you may not have played the latest iteration of the Madden franchise. Hey, that’s OK, we’re not all perfect. However, if you have, and like me you fell in love with the superb Longshot story, I had the honour of chatting with the actors who play Devon and Colt, JR Lemon and Scott Porter. Both guys were down to Earth, and great to talk to, sharing so insight into the making of Longshot, and how both their paths led them to be a part of one of the greatest additions to the Madden games in a long time.

First up, I spoke to Scott, and one of the first things I wanted to know was whether Scott was already friends with JR before filming because of their natural friendship in the game. “No, we didn’t. We shot in Vancouver, and we’re both from LA. We shot the majority of the game in Los Angeles, but the first time we shot was in Vancouver and you know, Brothers in arms when you go and shoot a project. You’re spending all day together every day getting to know each other. We made sure we got a couple of meals together, and we hung out. We really kind of developed a rapport that’s really kind of similar to what Colt and Devon have in the game. He’s way more introspective than I am – he’s got amazing takes on a lot of different subjects.

Just a much different perspective than I have, and I respect the hell out of JR. I’m a little bit more of the joker, and I talk a lot of trash, and I get a lot of sideway glances from JR. We fell in step really easily, but we have a lot of the same passions in life – we both have a love for football which I think was a big part of our relationship. I played college ball and he played at Stamford all the way from Oakland Raiders to training camp so we both knew the football stuff already so we can focus on the friendship, and I believe that comes through in the game mode.” Longshot is unique, and it must have been apparent when making it that something special was being created. “You know, when I read the script it was almost like 5 years ago and whilst reading it took me to so many places, I mean you didn’t expect to go to Afghanistan. The writer Mike Young really wanted to tell a story like Friday night lights, and I think that got me on board which I’m very lucky I’d done that project or else I might not have been involved in this (Scott played Jason Street in the NBC show based on the movie). Mike was so in tune with making a very grounded – very real story, and I think you can tell by the cast. I mean, you’ve got an Oscar winner, Mahershala Ali in the game. When you’ve got someone like that, it really legitimises how great the storytelling is, and in an age where the graphics have gotten to a point where it’s hard for the naked eye to tell graphical fidelity, it’s going to be about the storytelling and EA is at the forefront. I think you’ll start to see people take cues from what EA has done in Longshot.”

Now, if you’ve played Longshot, one of the standout moments is when Colt sings a song he wrote for Devon. It’s a rather sweet statement, and it hit me, showing me just how smart and poignant the story is in one short sentimental beat. I was curious to know whether Scott wrote the song himself. “No, I actually didn’t write it. There was a professional hockey player called Theo Fleury who Mike Young had worked with on an NHL title, and Theo wrote the song – wrote Longshot. I mean, I performed it live, it’s my wonderful singing voice [laughs].

It’s a great song. Again, it makes Longshot more than just a filler mode. I didn’t expect to have these amazing scenes, and that’s the great thing about this mode. Everybody expects these football players to be hulking beasts with attitude and it’s easy to lose who these people are behind the helmets, but when you take that away they’re normal people like us. You know, you’ve got a defensive lineman who can play Beethoven on the piano. There’re a lot of other sides to these people, and we help to show there’s a lot more.

This scene really got the financing going for this game mode. We shot it three years ago. When I heard that song, and saw that scene, it was such a cool little moment. Just silent support, you know? Devon comes into the room needing something – needing to talk something out with his best friend, and his best friend unwittingly gives him exactly what he needs, and you would never expect that from a madden game. The Miley Cyrus sing-along scene is so funny and endearing, and I think that’s what Mike wanted to happen. I think he did a great job and we succeeded.” All that motion capture stuff must be awkward to wear, right? Well Scott managed to share a little bit of light on what it’s actually like to work in. “It’s very freeing actually. When you’re shooting a TV show you’re always having someone pulling at you, and a scene may have to be shot again because your shirt isn’t sitting right, so it’s very freeing. The head gear is very different to work with. The helmet is like a cage, and you can’t touch your face. The more intimate scenes like the fight in the car, you know, we’re sat in a small wooden box on a sound stage trying to do this scene, and if we turn to each other at the same time we’ll knock heads and have to do the scene over again. It’s a back to basics kind of acting exercise, but it’s a blast.”

Next up, I chatted to JR Lemon, the actor behind Devon Wade. JR already had an attachment to the Madden series, but how did his role in Longshot come about? “Yeah it was interesting, because I had been doing the motion capture for football gameplay for the tackles and everything. I’d started in a tv show for a year and a half, and I was kind of phasing out of it. Mike Young was up in Vancouver and had an idea for a project, and I literally found out when doing something else. It was in its developmental stages, but he started talking about it, you know. It was about a football player who was going through some things – he’d lost his father. The first thing we’d shot was the bedroom scene where Devon’s looking out at the Bullfrog’s Stadium.

That scene really encapsulates the whole thing, right? That was the selling point for me – that one scene, and it wasn’t greenlit yet, so over the next year we shot a couple of other scenes just to keep pitching ideas to the executives. It was a slow crawl, at least for me as I had been in it for a while. It feels a bit more personal for me as Mike and I were building it as we were going along. He obviously wrote everything, but he was very welcoming, and any contributions or ideas I had about how a football player would feel in those circumstances were listened to because I had sort of lived it a little bit.”

Having a history playing football his whole life, it must have helped him in Longshot. “You know, I’ve been doing it my entire life, so what it sounds like to call a play and the official stuff – it’s all there for me. But I think what was most important about Longshot is that it helps to break down the stereotypes of these hard, emotionless football players, right? These figures that feel nothing. I mean, I know it. I remember the doubt and the feeling of being a football player, and you know in the same light as a human being. We’ve all had those times when we feel we’re not good enough, or we’ve had enough. For me, that was what was compelling about the story – it’s a story about that football that isn’t just about football. I’m approaching spoiler territory here, so if you’ve not played to the end you may want to stop reading. There’s a payoff at the end that hits you rather emotionally, but it’s not the typical kind of ending. “It’s easy to see Devon – without the payoff at the end – as a bit of a Debbie downer. If you don’t know where his pain is coming from, he just seems like someone who doesn’t want something. But what does excite me is when people do see the payoff, and you wouldn’t have it if you saw some charismatic guy. You see a guy who’s defeated, and a defeated guy living the victimisation – it does get on your nerves – it should get on your nerves [laughs]. The challenge is to see them get out of it and that’s what makes a compelling story, right? To see them go from the victim back to a warrior stage.”

It reminded me a lot of Rocky Balboa, the final film in the greatest saga of all time (yeah, boy! Rock FTW). “Yeah, it feels earned. That’s why you have to go through the initial stuff. I feel it’s such an accomplishment on a game like this. You know, when you’re filming it live, you’re not sure what subtleties are going to make it through. I feel a subtle performance is the most powerful, but how is it going to translate, and I think all the people that killed themselves to make that stuff come through did a great job.”

Video games are cool. Don't let anybody tell you any different.
MORE LIKE THIS
madden nfl 18