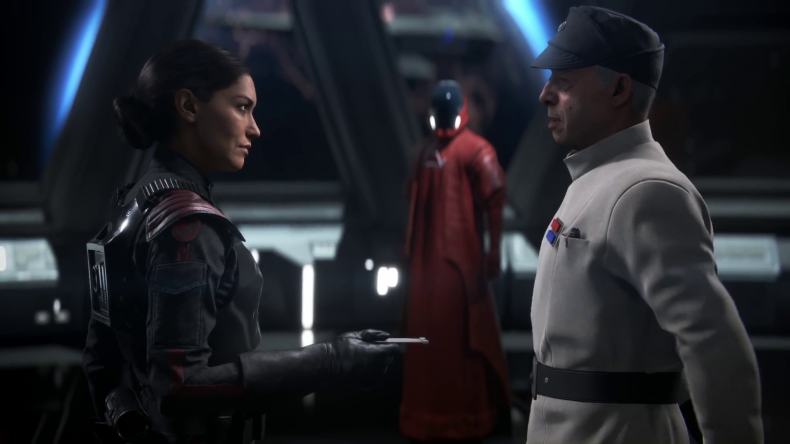 Star Wars Battlefront II comes out in just under a month and I recently travelled down to London to take a look at a preview of the brand new campaign that will feature for the first time. While down there I met with Mitch Dyer the writer and Chris Matthews the art director, both from EA Motive to talk a little bit about the unique approach of focusing on the Empire to tell a Star Wars story and how the team goes about creating worlds and spaces that feel alive.

First up I wanted to get a feel for how how long the campaign was likely to be for most players?

Mitch: It takes me about six hours to complete, so we are probably looking at around five to seven hours for most people depending on how they approach each situation.

It was interesting that Mitch talked about the different ways to approach situations because the impression I got from one of the missions we played on Endor was that it felt like a sizeable area that allowed for different ways to deal with the situations that arose. I asked if that was a fair assessment of what we could expect from the campaign as a whole?

Chris: Yes, we have those areas where the map is large and there are multiple ways to make it through, but we also have tight moments too like the prologue mission where Iden is making her way through the narrow corridors of the ship. Each situation requires a different approach.

Mitch: There is a moment on the Battle for Endor where your scouting team advises that there is a large group of rebels ahead and you have a choice to make whether you take them out or not. I joke at this point that I am the type of player that just likes to blow everything up so at that point that is what I did.

Mitch: [Laughing] Right, well there is a bunker nearby that the rebels were guarding and you can go into that and you will find all sorts of new ordinance and secrets and stuff. But you don’t have to do that, or you might have missed it.

I recalled this particular battle, and in my play through I did enter the bunker the rebels were guarding. I told Chris and Mitch as much and went on to ask about the upgrades you have access to while playing a mission. At certain points you will find new ‘Star Cards’ that will replace or enhance certain abilities that Iden has in much the same way they work in multiplayer. Was this a deliberate way to prepare players for the multiplayer?

Moving on, I was keen to understand what the driver was for focusing on the Dark Side of the Force, what it is particularly that drew the team to telling this story?

Mitch: There is a fascination with the Dark Side, and we wanted to dig into that a little bit. We wanted to show the Empire through a slightly different lens so we started from the position of wondering what it was like for the Imperials on Endor when the Rebels manage to blow up the Death Star. This is the lowest point for the Empire and so we wanted to focus our story on how individuals serving the Empire come back from that.

Chris: Yes, and of course there are parallels between the light and dark sides of the story, both essentially want the same thing to bring peace to the galaxy, but they have wildly different ways of achieving that – the dark side achieves it through fear and tyranny while the light side through negotiation and democracy. During my time with the preview, there were a few moments where the main character Iden is talking with her squad and a few bits of the dialogue raised some questions for me. I asked Mitch and Chris if I expected to feel sympathetic towards these characters who are essentially the “baddies” in Star Wars lore?

Mitch: [Laughing] No, well not if you don’t want to. We wanted to show the emotional complexity of the characters.

Chris: There are some conflicts between Iden and her team, at one stage something she says is pointed out by one of her team that could be considered traitorous. We wanted to show this side and examine the complexities of that.

Mitch: Initially when we created Iden she was very cold, but I really want to talk about Janina who voiced her. She was amazing and she brought with her an incredible warmth that really changed the way we had written Iden.

Chris: Yes, Janina’s performance really informed Iden’s character, we did a load of re-work on her facial modelling, skin tone etc. to really capture what she brought to the character. She did an amazing job with her.

I was running out of time so for my last question I wanted to talk about the brand new planet – Vardos, that hasn’t been seen before. How does the team go about creating a never seen before world and make that feel authentic and also part of the Star Wars Universe?

Chris: We really wanted to show what civilian life is like in the Empire, so we started with trying to build something around a concept or ideal of what a city would be like that is loyal to the Empire, and we settled on a Bonsai tree. And this tree means a lot of different things really, not only the colour red from the maple leaves, but this idea of nature versus control.

Mitch: Yeah, because of course, a bonsai tree really embodies this idea of controlling nature, and that is a huge part of the make-up of the Empire.

Chris: We travelled a lot to different locations to research what we wanted to create with Vardos, literally everywhere was visited, we photographed and researched different cities around the world. Take London for example, it’s a huge vibrant city with a diverse population of people and we took cues from cities like here.

We have hundreds of photographs and used these as sources of inspiration, so what you will see from Vardos is a city that is predominately influenced by Asian cultures, but there is also a lot of European influence as well. I can’t wait for people to see it.

Sadly, my time was up or I would have asked them to expand a little more on the idea of a Bonsai being their key inspiration as I found this fascinating, but instead I thanked them both for their time.

Likes to shoot stuff and wear pretty shoes. Is a BEAST at Titanfall.
MORE LIKE THIS
Star Wars Battlefront 2