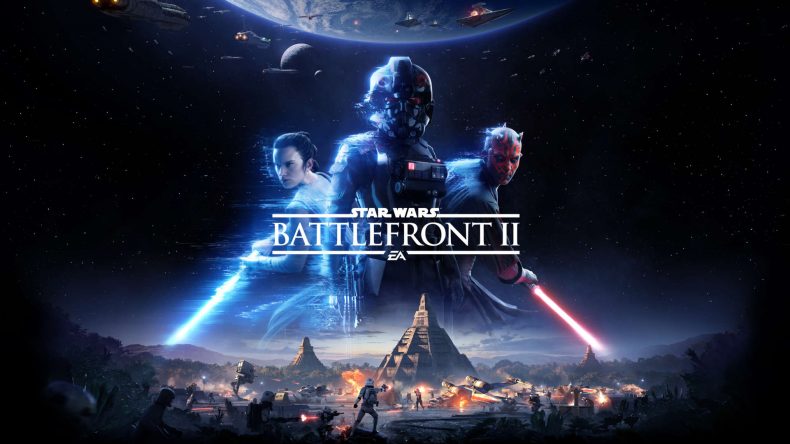 “Everything seeds the multiplayer”, I was told by the Art Director on Star Wars Battlefront II, and it is clear while playing through the campaign that this is indeed the case with the various playable characters taking on the multiplayer loadout style which can be switched up on the battlefield at special ordinance boxes. However, what that statement didn’t say was that was that the campaign, although really only a palette cleanser to prepare you for the extensive multiplayer modes, is surprisingly a lot of fun.

It doesn’t start well though, the first few missions are very much in the vein of a bland corridor shooter. We see Iden Versio, the Commander of an Imperial Special Forces team captured on the Invincible Faith, a Rebel Cruiser en route to Endor. Far from being captured by accident, her mission is to destroy evidence of what the Empire is up to. The battle that takes place once she escapes is fairly simplistic with rebel soldiers lining up to be gunned down by the more than capable Iden. It feels rote and uninspired, offering barely any challenge at all.

It is an inauspicious start for such a highly anticipated single player campaign.

The story is set immediately after the events at the end of Return of the Jedi, in fact the beginning runs concurrently with the movie and we get to see the Death Star blowing up over Endor from the eyes of Iden and Inferno Squad. From this point the story focuses on the Empire in the wake of its most devastating defeat; the Emperor is dead and his horrific planet killer weapon, the Death Star, has been blown into a million pieces. The Rebels have won and the Empire is in disarray. It’s a bold move to tell a story from the point of view of the Empire. We’ve been conditioned to view the Star Wars universe in simplistic terms, the “light side” is good, the “dark side” is bad. And to top all that, the Empire has always had a bit of a fascist whiff about it and that of course is very bad. We’re told that we should never root for the bad guys, and yet it is hard not to with Iden. She’s a fierce and capable commander, deeply committed to what she feels is right, but with an almost old-fashioned sense of honour and nobility that sees her questioning the morality of some of the orders she has been asked to carry out. Through her eyes, we see what the Empire is supposed to embody for the millions of people loyal to it throughout the galaxy.

Battlefront II continues in the vein of its two-year old predecessor in terms of wish fulfillment in the extreme. It serves up a campaign that is a greatest hits of Star Wars: ever wanted to fly an X-Wing; play as a Jedi; or visit a particular world then don’t worry, the campaign delivers on nearly every Star Wars fantasy you’ve had. That sounds like it is trite and as if it has been squeezed in to appease the Star Wars die hards, and that may well be the case, but each section is handled well, with just the right amount of time spent on each one.

Accessibility is the key point with Battlefront II; it is a broad-brush title, with an aim to please as many people as possible and it largely manages to achieve it. The story has a few twists, most of which are telegraphed well before they actually happen, which isn’t necessarily a bad thing. In some respects the story twists come somewhat as a relief. Where the campaign does shine is with the genuinely witty dialogue that the cast of characters has. It is clear that there is a lot of love for these characters and that is reflected well throughout the campaign. If you weren’t a fan of the shooting in the last game, then this new iteration is unlikely to win you over. Placed alongside other shooters like Destiny, or last year’s Titanfall 2 and the kinetic, full of impact, technical virtuosity on display in those titles is not evident here. However, everything you see and do is so authentically “Star Wars” its hard not to be impressed. There is the right about of “pew pew pew” from the blasters and pistols you use, the Storm Troopers are goofy in the little conversations you overhear and the shiny 70s style sci-fi corridors are just perfect. The commitment to the visual and audio design is every bit as astonishing as its predecessor and will delight in this regard just as much as the first game did. This is Star Wars rendered fully in a video game. Not everything is perfect, sections where you wield a lightsaber just don’t manage to capture the magic and there are some missteps with a slightly off rendering of Luke’s face and a voice actor that can’t quite mimic Hamill effectively, as well as a body that is entirely too small for Leia’s head, but overall this is another example of the team’s devotion to the source material.

Multiplayer has been extended with a more in-depth progression system. Now, rather than a simple Rebel or Imperial grunt you can choose one of four broad classes, all of which have their own strengths and weaknesses. Star cards can be crafted that alter their abilities in subtle ways and weapons are gated behind things like achieving a certain number of kills, so there is plenty of scope for a customisable class. You also now deploy as a squad of up to four players and the game rewards you for sticking near those players by providing battle point multipliers for in game activity. These battle points can be spent in game to purchase reinforcement soldiers or heroes that have slightly more powerful abilities that may just turn the tide of the battle, providing you know how to use them. Higher level characters cost more battle points to be able to call in, so much of these will only ever be experienced by the most capable of players, but the game gives even the most useless of online shooter players a set of toys that will momentarily make them feel powerful. They may not be Luke Skywalker on the battlefield, but they’ll get plenty of opportunity to try out an AT-RT or Clone Wars era AAT or be a Wookie, complete with bowcaster.

The blue ribbon mode, Walker Assault from the previous game has been revamped into the new Galatic Assault that features huge, multi-stage battles across beautifully rendered maps. Criterion Games has been drafted to rebuild the former Fighter Squadron mode from the ground up to deliver an aerial assault mode – Starfighter Assault, that is significantly more nuanced than the previous version with fighter classes and a more complex control system. Elsewhere there is the sabotage/defend mode, Strike and the more straightforward Blast and Heroes vs Villains modes. There is also a single player Arcade mode which mostly serves as a training ground to prepare you for the online multiplayer with a series of bite-size missions that feature characters from both the light and dark sides of the force. Finally, I want touch a little on the loot box economy as it is a hot topic at the moment. Key characters such as Luke Skywalker are gated behind the in game currency system. To access him you will need to accrue enough credits to purchase him. Your mileage on how egregious this is will vary of course. Higher tier characters cost more in game credits to unlock and you earn credits through playing the campaign, the arcade mode and multiplayer. Unlocking and owning these characters is no guarantee that you will be able to use them in game all that often though, as you will still need to be sufficiently skilled to earn enough battle points to be able to call them in. The noise of conversation about the micro-transactions in the game has many valid points, but it is important to stress that this is not a simple case of pay-to-win as the whole balancing of the multiplayer would be destroyed, and that is not the case. Presumably the pay-off for these deeply disliked loot crates is the assurance from EA that future content like maps etc. will be delivered free of charge, hopefully extending the lifetime of the game.

Star Wars Battlefront II is a good video game, it delivers a fun campaign that allows you to act out pretty much all your Star Wars fantasies. Iden Versio is a great character, one that I would like to spend more time with, and both she and the rest of the cast of characters have been written with much love. The multiplayer has been extended with more depth and progression to combat much of the criticism levied at its predecessor with Galactic Assault and Starfighter Assault as the stand out modes. The audio and visual work is outstanding and it is hard not to be impressed at the attention to detail in every part of the package. Everything feels bigger and better and more detailed than what came before and fully delivers that sense of Star Wars magic.

Star Wars Battlefront II is a good video game, delivering a bigger and more detailed game than its predecessor. Much of the conversation will be around the loot box economy, but if you can look past that you will find a game that is as close to Star Wars magic as you will find.