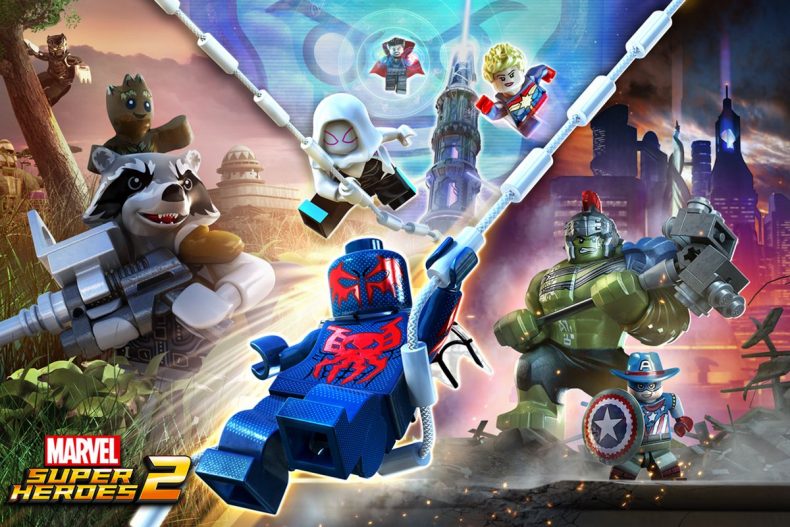 There’s no greater franchise in the world of entertainment than Marvel right now, so the sequel to LEGO Marvel Super Heroes was always going to happen. Whilst it would normally be more of the same, Tt Games has opted to go for something a bit different. There is a definite influence from the movies, but there are also plenty of characters pipped from the Marvel universe many will never have heard of, delving deep into comic book lore with characters from across various timelines and story arcs to forge a completely original adventure written by Avengers Forever’s award-winning writer Kurt Busiek.

Kang the Conquerer is threatening every reality across space and time, and it is up to you to stop him. That’s the basic plot, but your journey will be spread across plenty of different eras and locations that it’ll get blurred and hazy as you try and keep up with what’s going on. At times it feels as though Tt is trying to cram in as much as humanly possible that you get lost in the story, but it’s better to just enjoy the journey as opposed to try and keep up. You’ll find yourself in the Wild West, Egypt, a Noir version of Manhattan, and the Kree homeworld of Hala to name a few. In total there are 18 locations, and you’ll sometimes spend a good chunk of time in them. Sometimes, locations will only be used to face off against one of the game’s bosses, but there’s always the option of free play later on to revisit and explore. Like with most LEGO games, each level has its secrets, and also character-specific puzzles or challenges. The puzzles themselves are relatively simple and straightforward, meaning you’re not scratching your head for too long; some of them are actually quite interesting, my favourite being the ones Ms. Marvel is tasked to solve (one of the best characters in the game, by the way). Elsewhere, they’re normally a case of She-Hulk using her strength to pick up and throw a huge crate, Captain America using his shield to hit some switches, and Doctor Strange using his time manipulation abilities, a feature brand new to LEGO Marvel Super Heroes – fundamentally solved through brute force, throwing stuff, and time manipulation.

Tt tries to mix these tasks up and manages to make each super hero feel useful, even if, at times, it gets laborious doing it by yourself. That’s why it’s always good to have someone to play with, and as always you can have friends drop in and play whenever you like. Speaking of playing with others, there’s a Battle Arena mode that allows you to participate in events, devised by the Grand Master. One of which has you playing against up to three others to collect the Infinity Stones, released at specific times, and your job is to collect them all. There’s another mode called Colour Clash and you need to paint the arena faster than the others. They’re a nice interlude from the main story, and getting to do so in worlds like The Dark Dimension and Wakanda is pretty cool. One of the greatest things about the game is the wealth of characters, and using them to mess around in the open world hub of Chronopolis (the amalgamation of all the worlds Kang has forged together in present day Manhattan). Though there are heroes and villains you’ll know such as Daredevil, Black Panther, Kingpin, and Wasp, you’ll also get to play as lesser known dudes such as M.O.D.O.K., Gordo, Enchantress, Kingpin, and Man-Thing. You’ll unlock them as you play, but you’ll also get to spend studs on unlocking some of them as well. There’s a range of vehicles to unlock, with Ghost Rider’s Motorcycle being one of my favourites. There are so many characters to play as, and they’re all a lot of fun. Chronopolis isn’t just a means to get from one story location to the next either; there’re lots of side quests and minigames spread all over, and these will reward you with studs, new characters and more depending on the challenge.

It’s massively impressive just how much work has gone into the sound design. Many of us take it for granted, but it’s worth noting Tt has given every character a voice, meaning even characters as diverse as The Presence has a voice actor to deliver his lines. The hustle and bustle of the cities and worlds, paired with the general chatter emerging from groups of NPCs helps to make Chronopolis feel alive, especially after the disjointed way it gets introduced to you near the start. It’s also a gorgeous looking game, with magnificent lighting and smoothness to the worlds, delivering a solid performance. The only problems I encountered came via bugs which were quite a shame as they affected the gameplay, meaning I had to restart the game to the last save point. My game got stuck just after a cutscene, where I was unable to move away from the outside of a temple because the camera wouldn’t change views. Also, one of the menu prompts to help aid me wouldn’t go away, and every time I tried to click off it kept popping up until I had to turn off the PS4 to return to the action. The game is a lot of fun, and it does continuously mix it up throughout, but my biggest issue is the boss fights. Some are short battles that require you to simply hit the enemy, but others go on for far too long. It wouldn’t be a massive problem if there weren’t so many, but I ended up getting a bit tired of them. Some fights are also tricky to work out how you win them, as the obvious route isn’t made clear. I’m trying not to ruin the villains you face later on, but you’ll know when you get there, especially one in Manhattan Noir that frustrated me quite a bit.

For the astute collector, you’ll once again be treated to copious amounts of studs, gold bricks, and Stan Lees to find. The worlds are colourful and great to explore, and the wide range of diverse heroes and villains will appeal to casual Marvel fans and ubernerds alike. It’s a shame there were a few bugs, and some of the boss fights go on a bit too long, but for the majority of the game, you’ll have a great time, especially if you have some one to play with.

It's a lot of fun, and you're never stuck for something to do. It's also the perfect game to play with your friends and family, and the sheer amount of characters means there's someone for everyone.