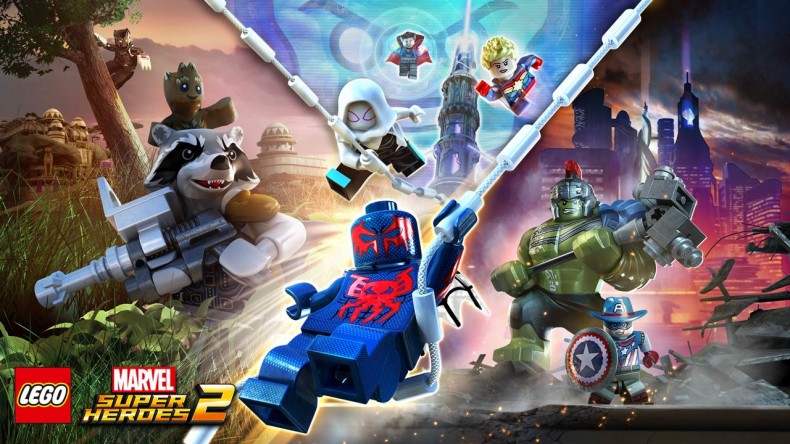 Those are the four things you can be sure of in life. LEGO games are as dependable as games get. They’re the Kellogg’s Corn Flakes of the gaming world: solid, consistent, trustworthy. Which is what you’d expect given we’re on LEGO Game #4700 by now (rough guess) which have featured eight billion characters along the way (rougher guess). TT Games could probably make these games in their sleep. Maybe they do! Maybe they woke up in the morning and found out they made level 5 of LEGO Marvel Super Heroes 2 during the night, not quite sure who was responsible but starting level 6 development regardless.

But do LEGO titles really make anyone’s gaming crotch explode with sticky excitement any more? Have we all just assumed they’ll forever be 8/10 games from now until the nukes fall, the needle on the Great Excite-O-Meter moving ever-so-slightly in either direction depending on the license involved? Do we really want the Kellogg’s Corn Flakes of gaming? TT Games seem to be aware of the problem, which is why they’re going all out for LEGO Marvel Super Heroes 2.

“Every game we make, we strive to make things better and for people to realise we’ve made an improvement, we probably need to do about 50 improvements” says Arthur Parsons, Head of Design at TT Games.

“We looked at this game particularly because LEGO Marvel Super Heroes was out around the launch of PS4 time. So we look now at this one knowing that we’re not supporting the older generation of consoles. It’s time to evolve. It was the natural time to look at every single element of what makes LEGO great and trying to improve it. Going through the process of analysing and asking, is that good enough? Should we change it up? And that process has meant we’ve revisited everything. It’s the right time to do it, I think.”

LEGO Marvel Super Heroes 2 carries on the story where its predecessor left off, picking up with the Guardians of the Galaxy in their ship. The gameplay initially seems the same mix of battling enemies, solving puzzles, and smashing studs out of the scenery. So far, so LEGO.

But there are lots of cool touches as you prod underneath the surface. Star-Lord is a great example. He has a move where he slaps on headphones and listens to music, hypnotising those around him while he dances and shoots his lasers as tinny rock music plays. Unique special moves are a much bigger part of this game – watch out for Spider Gwen snapping a selfie or Groot using time-bending technology to transform into monstrous size. Even the ship itself hints at level design that breaks out from the blocky past of the series. There are lots of nooks and crannies to poke at inside the small ship, suggesting a game that will be stuffed with secrets in unusual places to reward curious and enterprising players.

When you finally touch down on ground, all the Guardians re-unite, giving you a party of five characters to choose from amongst a swarming crowd of enemies. In the background, a giant celestial looms, firing scorching hot laser beams at your crew. The action is far more dramatic than previous LEGO outings, owing to the sheer amount of carnage that can now be squeezed onscreen.

Time can rewind depending on the villains or allies involved, Dr Strange being one character with the power. Time-shifting makes sense because the villain of the piece this time round is Kang the Conqueror, who has time-bending technology at his fingertips.

“We knew that we wanted Kang as our bad guy, just because of everything he brings to the table,” Arthur explains, “In the comics, he’s had these epic battles and despite the fact he’s got all this futuristic technology, he doesn’t necessarily use it because the way he likes to win is going head to head with the best and he beats them with his tactical nous. But also his technology is terrific. Because we can have all these great environments and all these great characters because time travel allows that to become a reality.”

Like Arthur says, having new characters brought into the LEGO Marvel world is a big part of the appeal behind the time-bending plot and gameplay.

“So you can have one Captain America meeting another Captain America. You can have all these different Spider-Man characters. Who’d have thought they’d co-exist? But it also allows for all this great humour. You can imagine you have this really serious moment, someone shouts Cap, and then there’s two Captain Americas and they’re both answering and there’s a little bit of banter. So it creates great comedy moments but in this really compelling universe. This subject matter, for me, is great. The game is obviously predominantly aimed at children but comic book fans will note everything… being able to put Spider-Man Noir in there is cool but also the 2099 characters. There’s so much fun to be had with all these variants.”

Arthur also tells us that LEGO Marvel Super Heroes 2 has “the most ambitious thing we’ve ever done” with its open world. Some 20 Marvel locations are linked together to form one huge hub, so you can go from Manhattan to Atlantis to Hydra HQ and so on without any loading screens getting in the way.

With the bigger open world and the bigger parties that means you can take more characters with you when exploring the world – Future Captain America with Rocket Raccoon with Spider-Man 2099 with Dr. Strange – there’s a huge amount of content being stuffed into LEGO Marvel Super Heroes 2. That’s possible because TT Games has finally left last-gen behind.

“If you’re designing an open world, when you’re designing it, you’re always conscious of the base platform out of all the platforms you’re working on,” Arthur continues. “You’ll know the memory limitations. You’ll know the size limitations. You can crunch textures, you can crunch geometry and everything. There’s still a footprint of what you can load and what you can stream.”

“We don’t have those there. So for example, the Chronopolis hub, it’s probably two and a half times as big as any hub we’ve done. But not only that, it’s got all different texture sets. So rather than having one big city with all relatively similar buildings with dressing, you’ve got everything from medieval England through to ancient Egypt to through to a giant celestial head floating in the sky and underwater… we’ve got all those textures. It kind of frees up the shackles a little bit.”

‘It kind of frees up the shackles a little bit’ being the theme of LEGO Marvel Super Heroes 2. It’ll be almost certainly good but it’s refreshing to see a LEGO game that legitimately has a chance at being great.