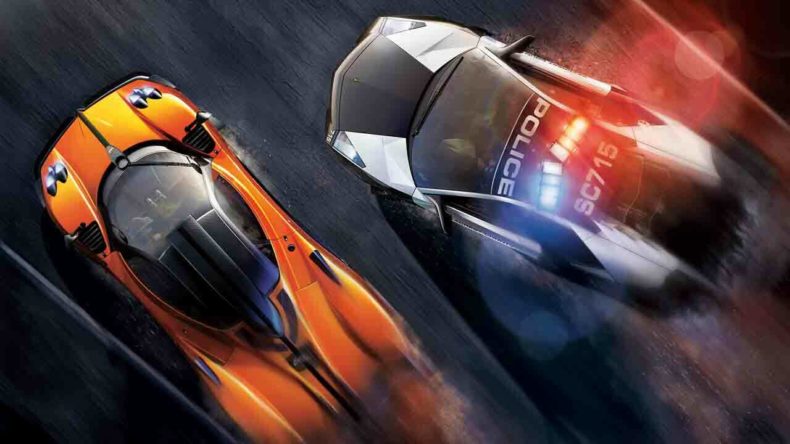 Not being much of a fan of racing simulations, I always found Criterion’s Burnout series to be much more my speed than anything like Gran Turismo or Forza Motorsport. I’d rather be tearing down a road at breakneck speed, flipping physics the bird as I narrowly dodge oncoming traffic and take out rivals like a 4-wheeled wrecking ball, sans chain.

The steady decline of the Need for Speed franchise was given a boost back in 2010 when Criterion adopted the series and injected a healthy dose of Burnout DNA in their reboot of ‘98’s Hot Pursuit. It was exactly what the franchise needed – and what the fans needed, too, given the inconsistent performance of the recent NFS releases and the fact that we weren’t likely to get a new Burnout any time soon. 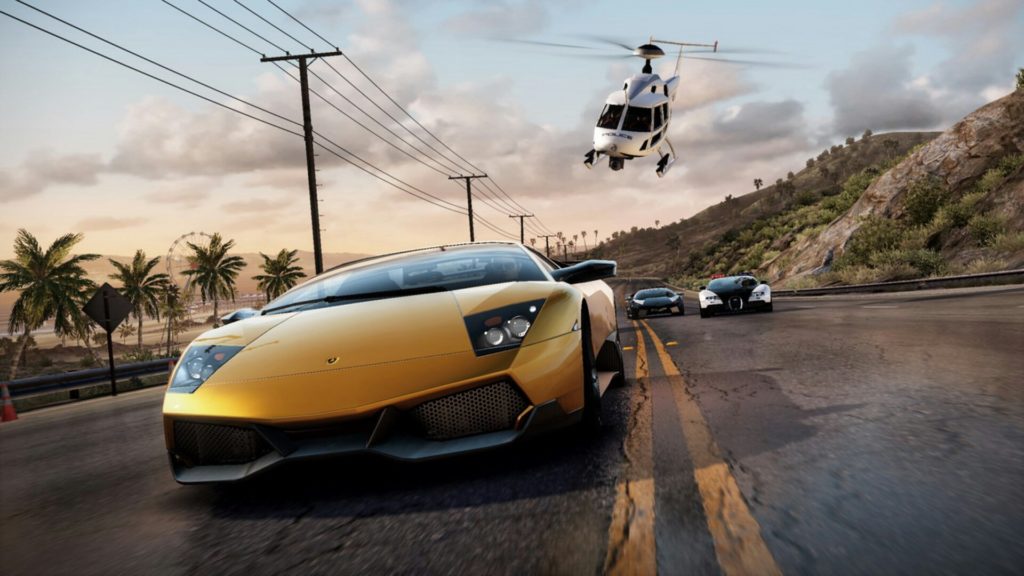 And now Criterion is back again, with a remaster of their remake, Hot Pursuit. Taking place in the fictional Seacrest County, the main hook for this is that, similar to Most Wanted, basic street racing has been replaced in many of the events with high-speed pursuits. Frankly, it was genius then and still is now, ramping up the tension and adrenaline each race by either having you chase down a fleeing criminal or escape a doggedly determined cop.

It’s all a silly nonsense, of course, seeing police officers driving suped-up muscle cars and deploying a number of “weapons” like wheel spikes and EMP bursts. But then, the average police department isn’t in the habit of fitting Nitrous canisters to their squad cars, either, so forget about realism here and just focus on the shiny cars going boom.

Because that’s what Hot Pursuit is about. The Remaster contains the original game and around six hours of DLC content including the new “Arms Race” and “Most Wanted” modes that add variety to the “career” mode, and worries not at all with attempting to be realistic. It’s almost instantly accessible, offering high-speed chase action in the very first mission and never letting up. It suffers a little from a lack of real diversity, though. 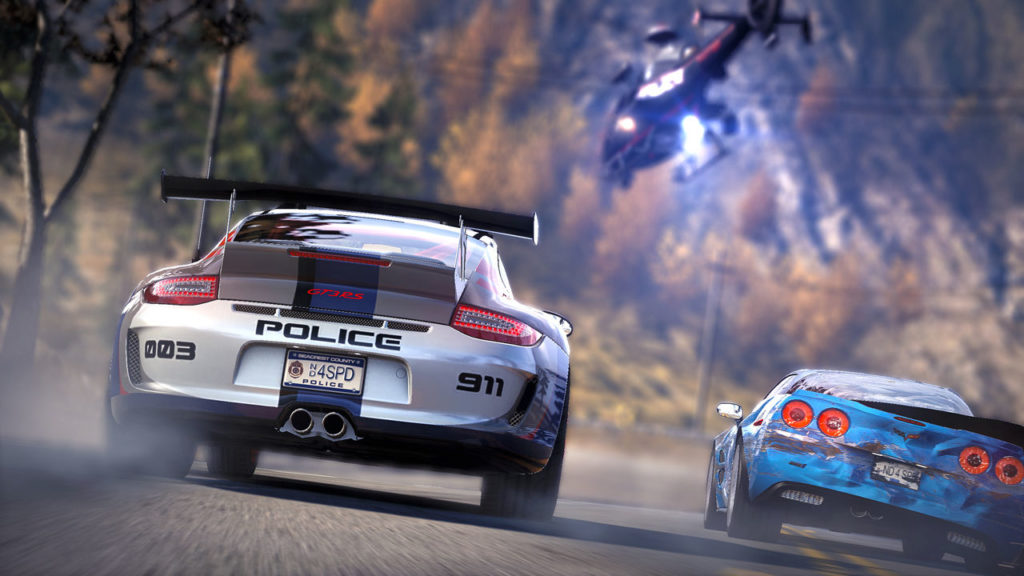 It’s the nature of the beast, perhaps, but missions follow a pretty set formula, whether you’re racing to a checkpoint (dressed as an emergency response if you’re playing on the cop line), racing from, or after an opponent, or straight-up racing. As a result, the solo career mode can become a bit samey after a few hours despite how immediately satisfying it is.

Thankfully the multiplayer component is pretty strong, allowing for crossplay over multiple platforms. Results feed into the Need for Speed Autolog, which collates times and scores across platforms and events, mostly for bragging rights. But it’s the new modes that make a difference here, and arguably elevate Hot Pursuit above its closest rivals.

The Most Wanted mode is incredible fun, dropping you into the open-world environment and asking that you simply play, either as a cop or a racer, looking to hunt, avoid, or wreck up the opposition. It adds an emergent element to an otherwise fairly formulaic game, with the option to take shortcuts and even set up ambushes on your unsuspecting rivals. Arms Race, on the other hand, is pure arcade fun, adding a Mario Kart-like weapon system that allows you to take down the opposition with well-placed traps, and an extra boost to encourage recklessness. Sadly, I am still appallingly bad at both new modes. 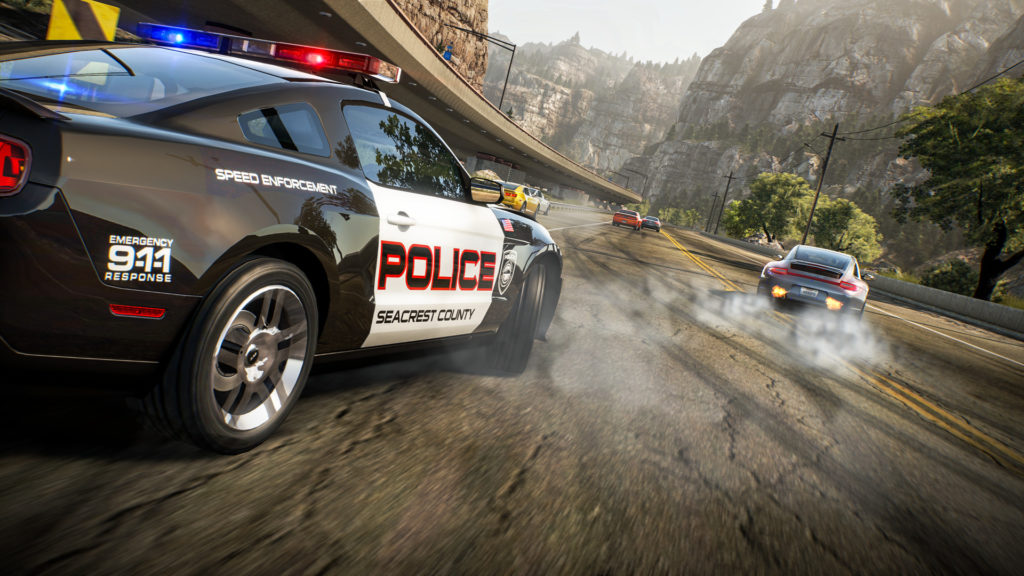 As for the remastering itself – it’s pretty decent. It doesn’t blow the competition away or anything, and the cars are perfectly shiny to look at. But it does look like it’s been remastered, if that makes sense. You can see that some of the textures just aren’t quite there, although it won’t matter at the speeds you’ll be driving. Predictably, too, handling is kind of all over the place. This is no simulation racer, anyway, so it’s to be expected, but there are a few cars that I hate to drive because they literally feel like I’m flying. The bigger, heavier machines – often the patrol cars – tend to handle better due to the weight and feel.

But I’m not going to pretend this is a high-brow racer. This is a game about going really fast, driving like you stole it, or like you really want it back, and wrecking anything that gets in your way. It’s pure arcade madness, with a couple of interesting new multiplayer modes, a killer soundtrack, and an accessible, instant-action approach to its career and online contingents. Whether you played the original or not, Hot Pursuit: Remastered is absolutely worth a test drive.

Doesn't look great under scrutiny
Not a huge amount of variety

Need for Speed: Hot Pursuit Remastered is pure arcade madness, with a couple of interesting new multiplayer modes, a killer soundtrack and an accessible, instant-action approach to its career and online contingents.