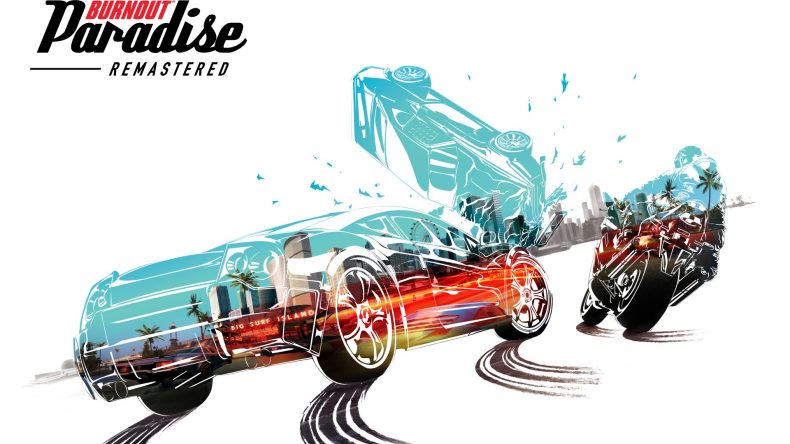 It’s difficult to really think about what people wanted from a current-gen re-release of Burnout Paradise. Whether you remember everything about it or not, you’ll remember the “bass, snare, bass snare” intro from Guns ‘N’ Roses’ Paradise City that opens the game, and that might actually be enough. It’s still cool, it’s still amazing.

But this is basically what I wanted from a remaster. It’s not a remake of the game, it’s a tarted up version of the original game running natively on PS4 and Xbox One, and it’s akin to the PC version, only with textures that can be displayed at 4K, all while running at a frighteningly fast 60fps. In fact, the nicest compliment I can give to this version of the game is that it looks how you remember it looking back in 2008.

Boot up the original via Xbox One backwards compatibility, though, and you’ll see that in fact some work has been done getting it running smoothly and with high resolution textures. But more than anything the remaster left me musing on how it captures a sense of speed that many modern titles do not. There are elements here that are done better nowadays, for sure. Forza Horizon has captured the spirit of Burnout Paradise, minus some of the more “crash” like elements, and added GPS tracking to let you find your routes easily. You may not remember this, but Paradise doesn’t give you a GPS, instead you’re given road signs that blink as you approach turns you need to make. You learn Paradise City, you feel it out, and there’s an argument to be made it’s better for it.

Elsewhere, it’s a game troubled by the fact the open-world exploration is better than the actual racing. Every race or event (bar crash mode) has only got a certain amount of possible end-points, and this means that you eventually just need to know which one is the finish line, and make your way there however you see fit. As freeing as this sounds, it’s also limiting. Luckily Big Surf Island (and all the DLC) is included, and although it’s nowhere near as good as the core original map, it gives you more game should you want it.

Instead, you’ll likely forget about upgrading your license and just go around smashing through barriers and billboards, taking down other racers, and setting record times on every individual street. Another small issue with the remaster is that it includes all of the special cars like the not-actually-a-DeLorean DeLorean, or the Ghostbusters car that isn’t that, because of licensing reasons. What this means is that the fastest cars you’d normally have to fight for, are all unlocked from the beginning. If you’re playing for the first time I implore you to ignore the temptation to test them out, and play the game with its natural progression, otherwise you’ll probably burnout (har har) early on, because you’re not getting rewarded with new cars as you play.

But Christ, the speed of this game. It’s a miracle that a 10-year old title can make your palms this sweaty, or make your face contort as though five actual real lemons have been pushed into your mouth, because of a horrendous crash that’s seen the front of your vehicle concertina into where the middle of it used to be. Crash mode remains a joy, bouncing your car around an intersection trying to wreak havoc upon innocent Paradise City drivers for a high score: that’s what gaming is all about, right? Maybe you’re more in it for the camera support (Kinect or PS Camera) that lets you take a picture every time you upgrade your license, and you better believe I crotch chopped for one of those.

In many ways, Burnout Paradise is the blueprint for games like Forza Horizon, but it’s also a throwback to a forgotten era where racing games could be a sim or an arcade racer. While sim-racers won out, and few bother remembering the elation and brutality an arcade game could deliver, Burnout always had this at its core. It’s a love letter to the past and a hope for the future. You can keep your ultra realistic sims that have you spending as much time in the menus as on the tarmac, because I’ll be in Paradise City with dry eyes, afraid to blink, singing along to Jimmy Eat World’s “Electable (Give it Up)” about to absolutely destroy a priceless car. Oh, and Avril Lavigne’s Girlfriend is a shit song, deal with it.

Ten years on, this is still one of the best arcade racers out there. Hours will be lost just flying around the map being a nuisance, and a few old fashioned decisions won’t dampen the excitement from playing a game this fast and furious.