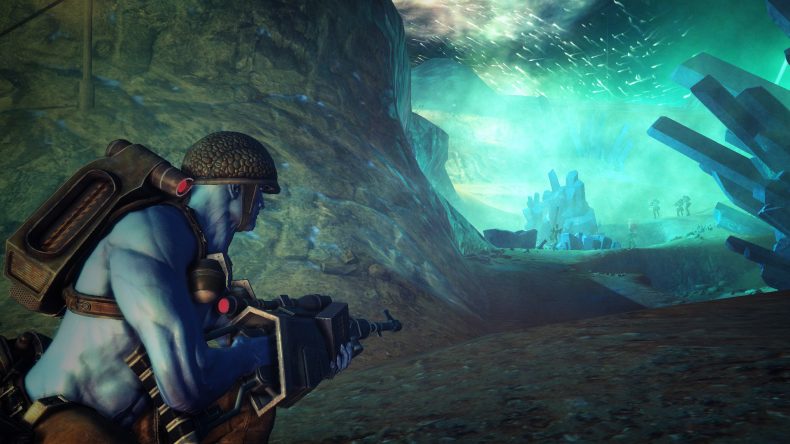 Wow. Has it really been over eleven years since this game first graced the original Xbox? That makes it all the more depressing that it’s taken this long for Rogue Trooper to be given a second chance. It did cover shooting before Gears of War, but since Gears was released later that same year, on the then-new and shiny Xbox 360, it’s no surprise that Epic’s game received all the plaudits. I remember loving Rogue Trooper back then, with its unique take on a squad shooter and its pacey combat. I always wanted a sequel, but I’ll settle for this upcoming remake. Beggars can’t be choosers, as the saying goes.

Booting up this Redux was a little sobering though, as it’s not exactly a looker. With its horribly compressed intro movie and wooden animations, it almost feels like Tick Tock Games has simply pasted new visuals over an eleven year old game, rather than rebuilt it from scratch. Maybe I’m being overly harsh, because it does have some decent character models and plenty of detail in its textures, but the generally smooth animation belies some really awkward movement. With today’s games often using procedural animation and whatnot to provide us with realistic changes in elevation, Rogue Trooper Redux instead opts for using very stiff models that look like they’re constantly running on the spot, no matter what the surface or how steep it is. It just doesn’t look right, not in today’s market. Luckily, the gameplay is as fun and fast-paced as I remember. While Rogue doesn’t exactly move quickly, he can move quite nimbly during a gunfight, diving around between cover. His futuristic weaponry really helps with this, as his assault rifle can double up as a sniper rifle whenever necessary, to blow the heads off any unsuspecting Norts. Those are the enemies by the way, but we’ll get back to that in a moment. The arsenal grows quite explosive as you progress, but the standard assault rifle and shotgun tend to be the ones to stick to in a fight.

Set on a planet named Nu-Earth (this is based on a 2000AD comic, after all), which has essentially been poisoned thanks to a perpetual war between the Southers and the nefarious Norts. While the Norts developed bio-suits to protect themselves against the noxious atmosphere, the Southers took to genetic engineering to produce the Genetic Infantry, a race of blue-skinned warriors created with an immunity to every known toxin and poison in existence. They also contain bio-chips within their skulls, which basically contains the memory and personality of each G.I. and can be transferred into pieces of armour and weaponry upon the death of the warrior. This is exactly how Rogue ends up with a talking gun, among other things, that provide him with an extra edge in a fight. This is where the game comes into its own, with Rogue’s squad inhabiting his gun, backpack and helmet. It takes the squad shooter template and really messes with it. Gunnar adds a sense of intelligence to your targeting system, helping you to pinpoint critical areas of each enemy, exploiting their weaknesses in the heat of battle. He’ll point out the flammable backpack on most Norts, which explodes shortly after being pierced with a bullet. Gunnar can also be deployed independently as a turret, so you can cover two areas at once. Bagman will essentially become your personal armoury shop; give him the scraps taken from the bodies of the dead or from piles of old tech hidden throughout the game’s levels and he’ll be able to construct ammo, medikits and upgrades. Helm unsurprisingly ends up taking up the chip slot on your helmet, and can be used to hack certain doors and computer terminals. He can also project a holographic decoy of Rogue, used to distract enemies while you sneak around or snipe enemies from afar.

Regardless of all these features, Rogue Trooper boils down to simple shooting. Its pace isn’t Doom levels of fast (but then, what is?) but it rarely wants you to sit behind cover and take pot shots, instead encouraging you to just get stuck in. Gunnar helps to find targets and their weak spots, so aiming down the sights just isn’t necessary. I still found myself doing it from time to time, but I’d mostly just enjoy shooting from the hip and letting Gunnar do most of the work. The enemies aren’t exactly clever, only briefly using cover properly, but that does at least help facilitate the mindless shooting. That said, a little bit of strategy goes a long way. You can leave Gunnar to watch over an area while you flank the enemies, then give him the firing order as you use your pistol to create a deadly crossfire that cuts down an entire room of Norts. Different enemy types also encourage taking a different approach to murdering, such as the Fallout-looking armoured suits that require a bit of thought to take down cleanly. There are turrets that give you the choice of avoiding their sensors, or just shoot them out and blind them to your presence entirely. It’s a shame then, that this variety isn’t present in the level design. The original was always filled with brown, rocky and dull environments, but it’s a shame that this remake couldn’t liven them up a little or change things up to make it feel a bit more modern. When combined with the awkward, stiff movement, the whole package just feels dated. Even the city areas’ neon lights are somehow muted, like somebody thought that having any bright colours might make it less mature or something. You know, in a game based around a bloke with blue skin. Even the sound falls flat, with monotonous gunfire and stock explosions, alongside the fantastically pantomime voice acting.

When Rogue Trooper Redux was announced, I couldn’t have been happier. Now that it has finally arrived, albeit in preview form, I find myself wishing that it had stayed as a memory. It’s by no means a bad game, but it hasn’t aged as well as I had hoped. Is there time for it to improve before its launch this month? Only time will tell…