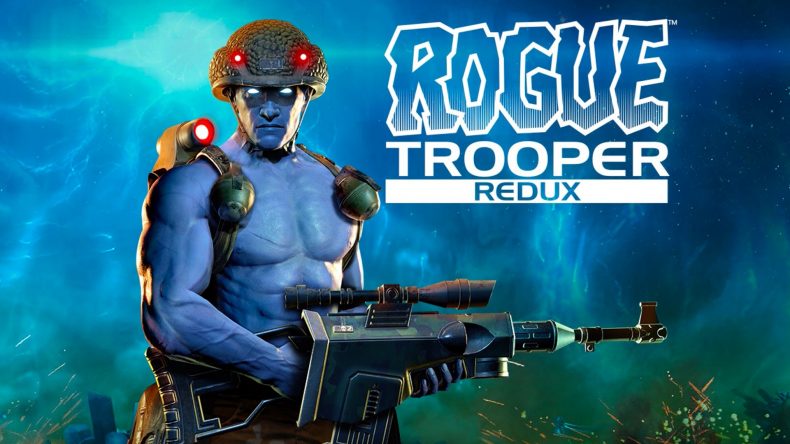 You don’t really hear much of 2000 AD Comics anymore, do you? Although it continues to be a good place for British talent in the comic book industry, it hasn’t really been in the mainstream for a couple of decades. It’s probably Sly Stallone’s fault. But hey, Judge Dredd isn’t the only thing that came from 2000 AD’s best days, there was also Rogue Trooper. When Rebellion bought the old comics giant, it was only a matter of time before it produced games based on its best franchises. Although it started in 2003 with Judge Dredd: Dredd vs Death, it wasn’t until 2006’s Rogue Trooper that Rebellion had created its best 2000 AD game.

Thing is, it all went a bit quiet after that. When Rebellion announced the remake of Rogue Trooper, a game I championed for quite some time back in the late 2000s and the early 2010s, I was understandably excited. Maybe that’s why the disappointment hit me so hard, when I started playing this Redux version. Don’t get me wrong, Tick Tock has done a great job in recreating that game I loved eleven years ago, updating the visuals and turning Rogue into a highly detailed soldier; but someone forgot to update the gameplay. Now, the gameplay is still good, but many, many games have updated the formula and Rogue Trooper’s gameplay is a bit behind the curve nowadays. I’m getting ahead of myself though, aren’t I? You probably want to know who the hell Rogue is, aside from being a 2000 AD character from the Eighties. He is an engineered life form, created by the Southers to withstand the toxic atmosphere of Nu Earth, in order to battle the nefarious Norts. Rogue is only one of many almost identical soldiers, called Genetic Infantrymen (GIs, for short) much like the clones from Star Wars, if they had blue skin. Unlike those clones however, these blue fellows’ personalities and skills are downloaded to a chip in their skull upon death, and these chips can be implanted in various items. This is how Rogue Trooper offers a unique take on the squad shooter genre.

After the Quartz Zone Massacre, during which almost all the GIs were slaughtered, Rogue is thought to be the only surviving member of the GI race. But in the opening section, depicting said massacre, you’ll rescue the chips from three of your fellow soldiers; these come in the form of Gunnar, who helps you with aiming and can become a sentient turret when needed; Bagman, who uses salvaged scrap to create ammo and upgrades for Rogue’s weapons; and Helm, who can hack various things in order to proceed. So technically, Rogue Trooper is a squad cover shooter, just without a physical squad.

The gameplay is still great fun, with fast-paced shooting at the forefront of everything, but there can be some tactics involved if you fancy it. Gunnar can be placed as a turret for example, as you sneak around the other side of a bunch of enemies, and you can catch a squad in a crossfire. Combine that with a grenade toss for added shits and giggles. Gunnar also helps to aim from the hip, highlighting when you’re targeting a headshot or tank shot (I’ll explain in a moment), which certainly helps to keep the action flowing smoothly. You can also use him as a sniper rifle, for those tricky, long-distance attacks. When combined with Helm’s ability to create a decoy of Rogue, you can lure targets out into the open for some sweet, sweet sniping. It can be as tactical as you want, or as fast and frantic as you desire. Your call. As for those tank shots; the Norts don’t have any genetic engineering to resist Nu Earth’s poisonous atmosphere, so they wear hazmat suits with big oxygen tanks on their backs, which are prone to explosive results when pierced by bullets. I’m sure you can see where I’m going with this, and the hilarity that often ensues. Man, I sound psychopathic right now. Swiftly moving on…the game looks just how I remember, only with more detail obviously. The detail is pretty impressive, but the animation is incredibly stiff, which lends the game a bit of a B-movie quality especially when combined with the awful, awful voice acting. Luckily, it makes the game quite funny at times, but it did fall quite flat during the majority of my time with the game. This is also down to some poor sound design, with gunfire sounding really dull and although explosions have a satisfying boom to them, they all sound like they were taken from stock. Combine this with some of the most boring level design I’ve seen in awhile, especially during the incredibly slow on-rails segments, and you can probably see why I was disappointed.

Luckily, this disappointment didn’t stop me from enjoying the game still. The shooting is satisfying and frantic, especially when some of the special enemy types show up, and the weaponry offers some great potential for hilarious and explosive action moments. It’s just a shame that the gameplay wasn’t updated to take advantage of the advancements in cover shooting over the past decade, because that could have resulted in something truly special.

Despite some fun shooting, Rogue Trooper Redux plays almost identically to the original, which unfortunately hasn’t aged too well.