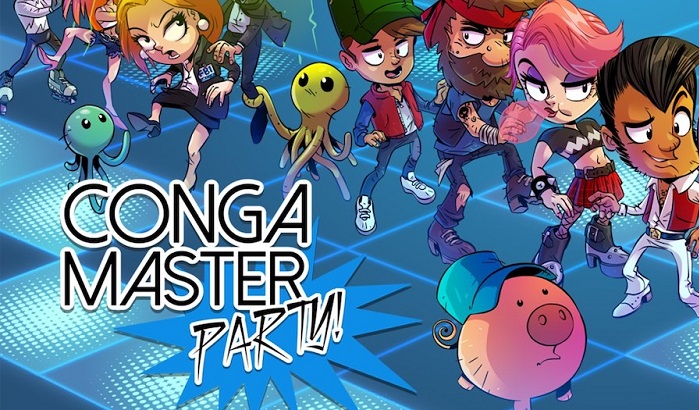 As a kid my father went round the local area doing DJing for parties, much joy was had in helping to get things set up and do my part to get people up and dancing “Do, do, dooo, come on and do the conga, choo, choo, choooo, like a train across the floor” would ring out and a line would form, as we meandered around the room more people would join and eventually the line would spill outside for a tour around, coming back in before the song ended. I never thought that twenty-five years later I’d be playing a game based around this concept, what could possibly go wrong?

The idea is simple, you pick a party animal from a selection and you dance your way around the venue circling other people until they get swept up in your rhythm and join your conga line, you have a series of bars to fill, each corresponding to the particular personality of someone else in the venue, pick up enough of those people to fill up all your bars and you’re free to go to the next party. The hard part is maintaining your momentum meter, a bar that gradually goes down as you dance without people joining, as people join it goes back up. Collect several people at once and you gain a combo which provides bigger boosts. Your dancer constantly moves forward, and you use the L+R buttons to turn them left and right, while pressing them both down makes them dash. You’ll slalom around hazards, dash between groups and circle dancers like a vulture waiting for a lost animal to die. It’s kind of hard to not get caught up with the rhythm yourself, and I’ve lost count of the amount of times I’ve bumped into someone and lost their interest because I was bobbing to the music and not paying 100% attention to my character’s personal space.

That’s right, get too close to someone when dancing and you’ll bump into them, sending their interest bar right down to the bottom again, so if you’re not wary of your turning circle you’ll wind up struggling to get dance partners. Dotted around the areas are other hazards too, like cleaners, where if you dance into their clean streak you’ll skid uncontrollably, hitting a banana will do the same thing. There’s also a waiter who will get you drunk if you touch him, making your movements erratic and hard to control, finally there’s a guy looking for trouble, get near him and he’ll punch you and send you flying across the dance floor.

Once your group has got to the point needed you can leave and head to the next party, on the way a UFO hovers overhead and abducts members of your line, during this section you need to run by hammering the ‘A’ button and jump over pigs by pressing L. It’s pretty much guaranteed that you’ll lose the majority of your line during these segments no matter how fast you mash ‘A’. You can keep yourself at around five or six people, and will potentially lose more should you hit a pig, but you’ll never start with a lengthy line. Outside of story mode there’s a load of multiplayer modes with names based on major game franchises; unfortunately, all of these just a little bit too similar to each other. The best one of these games has to be Cut the Conga, where you fight to keep your line long, then have a mad rush to grab the scissor power, followed by a Benny Hill like chase as one of you dashes away while the other attempts to slice through your line and leave you jiving alone. Overall, here’s a lot of fun to be had, but because of the similarity between modes you will only play one or two of them when you have the gang round.

Conga Master party is a fun, silly game for a fun, silly time. You’re unlikely to pour hours into playing it, but for a palette cleanser between games, or for a bit of a giggle with friends it’s a guaranteed good time, kind of like a real conga, but you’re unlikely to get one of those started without a DJ.

Conga Master Party is fun while you’re in it, but the appeal is a little short lived, just like a real conga line.