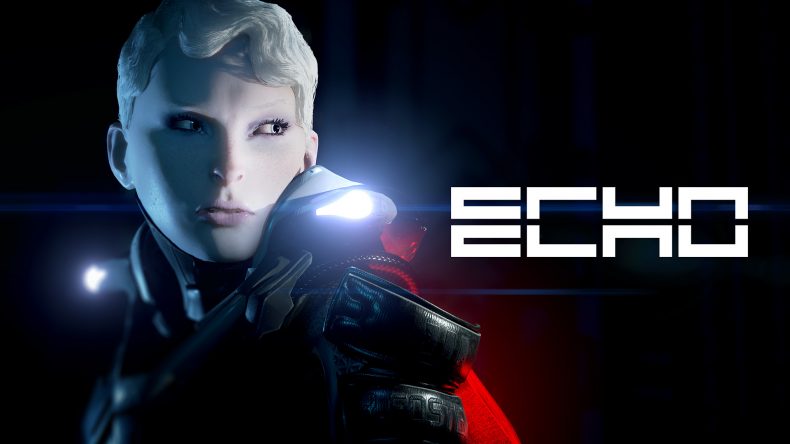 Echo is a difficult game to categorise, at first look it seems like an action adventure game, however, as the mechanics gradually reveal themselves to you it morphs into a tactical stealth action game. Echo forces you to think about how to approach each situation because of its clever and unique use of AI. Everything you do in the world is recorded. Teach it too much and you will have to deal with everything you have done in the next reboot. Its a game where playing against yourself is your greatest obstacle to success, and it is fascinating.

You are En, an impossibly slim hipped young woman who has been in stasis for one hundred years. You, along with the curt AI, London, have been travelling through space to a space station known as the Palace in the hopes of bringing a former companion back from the dead. The story itself is quite confusing, En appears to be some kind of weapon crafted by a cult her Grandfather created, and the person you are trying to revive had been sent to kill you. The story is a bit convoluted, but is told well through the exceptional voice acting. Most of the early game is story exposition with En walking slowly through the dark underbelly of some unknown structure bickering and talking with London. It’s a slow start, but the premise of the story is enough to keep you moving forward. Once you enter the Palace things start to change, at first the place is empty and dark. It’s an eerie place to walk around as your light is limited. Gradually, the lights start to flicker and come on and you see that the Palace is a huge labyrinth, opulent and brilliant, but bereft of any life whatsoever. The power to the Palace is corrupted though with frequent blackouts that end with a system reboot. Gradually, as you move through the empty corridors, black, amorphous blobs appear that grow in size after every blackout. Eventually the blobs start to take shape and you realise they are all exact replicas of you.

The Palace is a huge computer generated world and every action you carry out as En will be recorded and uploaded to your clones after each black out. If you open a door, the system will record it and the next time the lights come on the En replicas will be able to open a door and move about in a different way. Each level becomes a game of cat and mouse; teach your copies too many things and they will use those skills on you after the next system reboot. If you kill any of the echoes at any point, either with the lights up or during the blackout, when the reboot happens they will return to their original position, but upgraded with their new abilities, so planning what to teach them and when is crucial to a successful navigation of each level. Everything you do is governed by your suit. If you want to use your weapon it will use up one power cell, leaping over a barrier to the floor below will use a cell also. You can recharge your power at various locations called “suns” around the map that will give you one power cell back. You also have a limited amount of stamina, if one of your copies sees you it will start to chase you down. You can sprint for a short time and push the enemies away, but this uses stamina also, and if you run out it is often game over. You are far better to try and sneak past enemies particularly as if you are grabbed you have a fairly lengthy window of time where if you are grabbed again you will fail the level and have to start again.

During the blackouts it is open season on progressing through the labyrinth, anything you do in the dark will not be recorded so you can shoot, run, mantle objects and use elevators with impunity. Your only stumbling block is that visibility is severely restricted meaning you can easily run into one of your echoes.

The best of Echo is when you utilise the recording function to your own advantage, teaching the Echoes to collect collectibles or to move around the environment to operate bridges and doors to remove them from your path. This doesn’t always work in the way the game makes you expect, particularly with a late game enemy that takes quite a bit to take down. I wanted to be able to use my echoes to assist, but it seems that the mechanic the game has spent all the time letting you use won’t allow it right at the end which was disappointing. The game runs to about eight hours, and unfortunately, the clever use of the AI is by far the best part of what Echo has to offer. The lavish environments are stunning at every turn, but they lack any visual distinctiveness as you progress further into the game, and after a while fatigue sets in as you are placed in yet another sumptuous space and asked to navigate it. Also, aside from the late game enemy, everything you face is a carbon copy of yourself and this consistency also starts to wear thin. Things are mixed up a bit with complex, almost Escher like environments that wend and weave around causing disorientation, but lengthy checkpoints and a manual save system that is hidden around the map often means that if you mess up you have to repeat an entire section again.

Echo is one of the most interesting games I have played in a while, the science fiction story is suitably compelling and drives you forward to find out what happens. It is a game of one exceptional idea that delivers a unique and innovative experience that is taken slightly too far. The lack of environmental changes and same enemy type throughout means that, although the experience is enjoyable, it does start to wear out and over-stay its welcome a little too much.

Echo is an example of an exceptional idea that is enough to carry a whole game. The clever use of AI creates unique challenges, but the lack of environmental changes and same enemy type throughout means that it does slightly out-stay its welcome.