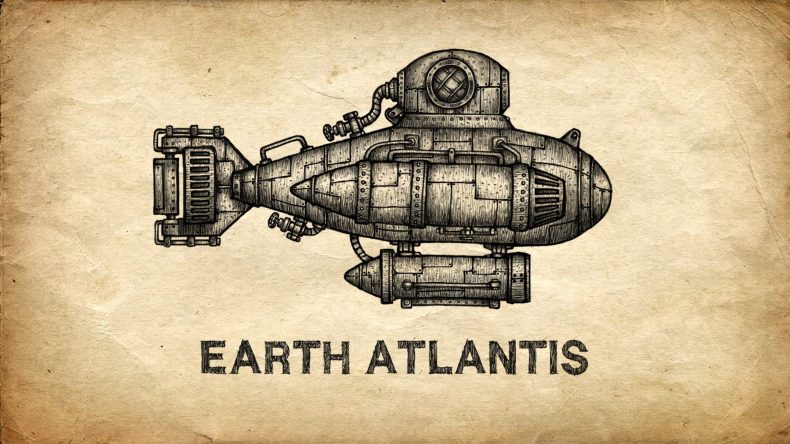 Climate change is real, there I said it. If we don’t do something soon then the whole of the planet will be underwater, there’ll be nothing for our future generations to call home. In Earth Atlantis we’re exploring a world where everything is under water. As you move around you’ll see buildings, cars, and even the Statue of Liberty in the background, a sombre reminder that if we don’t start changing our ways then the things we hold dear will be gone.

Machines rule the world in the post-apocalyptic future that Earth Atlantis has us explore and because of the water levels they’ve adopted the forms of marine life, molluscs, crabs, swordfish, octopuses – I’ll tell you something, it’s really odd seeing a Mola mola firing electricity and missiles at you – and of course, there are bigger versions which act as bosses. As a hunter it is your job to explore the area and rid it of these giant oceanic monstrosities. The place is littered with small fry, which won’t pose too much trouble, and will drop the usual smattering of weapon power-ups and health although, if your health is full, and your weapons at max power they won’t drop anything. Power-ups can also be gained from crates and barrels you find hidden in nooks and crannies, each containing a letter that designates a weapon. Small fry enemies drop Ps which boost your primary weapon, crates and barrels will distribute Es (no, not those), Hs, Ms and Bs, which are Electricity, Homing missiles, Missiles and Bombs respectively. Collecting more of the same letter powers those weapons up further, but of course, picking up a different letter means you drop your old weapon, so if you’re attached to something, be careful to not pick up something else. I found myself quite attached to the Electric power, which shocks anything within its range; further power ups allow you to hit more enemies and deal more damage, and it’s incredibly handy considering you spend a lot of time dodging and as a result firing forward. Shooting straight happens most of the time at least, as you power up your primary weapon you’ll start firing behind you, later ships you unlock can fire in all directions, and then of course homing missiles will home in, bombs bounce off of walls and electricity will hit whatever is near you.

At its heart Earth Atlantis is a bullet hell shooter, there’ll be fraught moments when you find a lot of enemies have spawned nearby, but for the most part they’re nothing to worry about when trying to find your way around; it’s the bosses where this bullet hell element really comes in. They have easily predictable attack patterns, but the large weapon ranges, attack types and rush attacks make for a deadly combination. One boss expels energy balls, electric bullets, missiles and bombs as well as does a charge forward regularly, if you’ve timed your movement wrong just a little bit you’ll wind up on a retry. At least when a boss is down it stays down, a quick jaunt back to the title screen informs you just how much of the wanted list you’ve managed to take down of these mechanical beasts, and you can continue from there. As bosses die more sections open up, giving the game a kind of Metroidvania feel as well. As more sections open you can create new starting points, which helps in the transition from location to location as you search for your next target.

Speaking of which, the game does do a poor job of telling you what you’re aiming for. The loading screen does tell you that they’ll inform you of the target locations, but it doesn’t say how. Early on I realised there was a radar like map in the top corner, but I had no idea what was represented on it. Turns out the dot with the ring around it is you, then there are other dots which represent clusters of small fry enemies, and then bosses are shown as ‘X’es. You’ll have two bosses to take down, and then more will spawn up. You’ll venture to new locations, find yourself in a nice open space and think “I’ll be back here for a fight later.” Once you’ve figured that out, and how the weapons system works the whole game does click, and it becomes quite compelling. Often on my commute I got so drawn in that I didn’t realise I was nearly home and I nearly missed my stop as a result. The broody music does a good job of really immersing you in the game’s parchment and pencil aesthetic, and hunting down one last boss becomes another, then another; and if you die it’s not normally a log journey to try again, but you might want to work on your weapons again, as you lose everything when your run ends.

There’s some inconsistency with boss difficulty, some will be a walkover while others will be true heart in mouth stuff, and some others will slaughter you before you knew the fight had started, but this really helps keep you invested in the game. Earth Atlantis sits in a niche right in the middle of bullet hell and Metroidvania, it doesn’t excel at both, but is still great to play. It’s time to get lost at sea.

Even if you’re not a fan of bullet hell you should give Earth Atlantis a try, this really doesn’t deserve to sink without a trace.