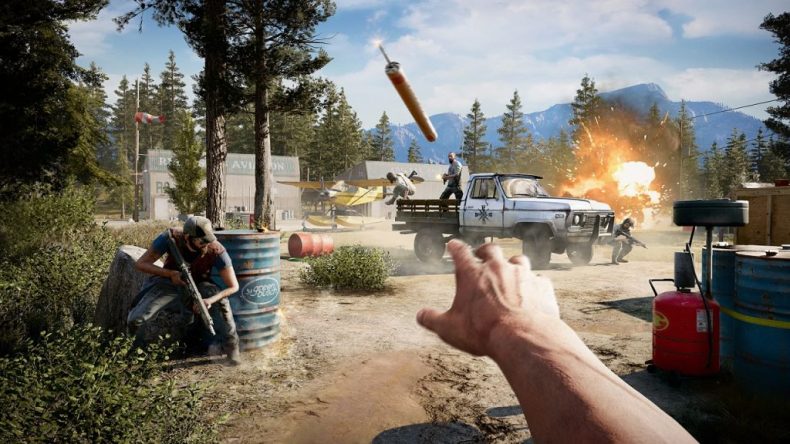 Some things will just never change in Far Cry: the bow and arrows will always be fun to fire, the juggernauts will always be a struggle to kill and each and every new entrant into the series will always have the same structure and game play. Far Cry 5 is still very much Far Cry. You know how it works by now: a massive open world brimming with wildlife, outposts you can claim however you see fit, a wealth of story and side missions and a captivating bad guy to tie it all together. This is more of the same.

However, from my two hours of play, I get the feeling that this Far Cry is at its absolute optimum. Every aspect has been finely tuned, tweaks have been made to make this style of game the best it can be. If you’re not already a fan of the Far Cry games then this one probably won’t win you round, but if you are then it seems like you’ll be in for a treat. What immediately impressed me was how well realised the world of Hope County is. Ubisoft has gone from the largely people-free Caribbean Islands and Himalayan Mountain tops to a still rural but much more densely populated Montana countryside and it works. The towns are rustic and rugged, the people are friendly with (at least to my ear) accurate accents, and the world feels genuinely lived in and authentic. There are more characters to meet in Far Cry 5 than in any of the previous games and all of them have their own jobs and opinions, which helps the world come alive.

Outside of the towns and into the wild country, it seems as if Ubisoft have turned the “random, hilarious things that can happen” meter to the max. We all have our own story of how we dropped a log when a crocodile attacked us from the murky depths in previous games, but in Far Cry 5 it feels like another aspect they’ve nailed. The environment feels dynamic, as if things could happen even if you weren’t there. Animals attack each other on the hunt for food, scavengers will tuck in on road kill and attack humans which you’ll have to save. In fact, there’s almost too much going on at times. Aside from the wildlife you have the nutters of the Eden Gate cult constantly knocking about and its your job to put a dent in their plans by freeing captured citizens and blowing up their property. The problem is you’ll be chasing one car to free some poor sod and then a propane truck will barge past the other way. Then out of no where a bull is ramming the side of your car. It can be fun that there’s always stuff going on, but I found it to be a bit of a sensory overload at times as there was never a moment to take a breather. I’m not sure how sustainable that sort of constant action will be over a 40+ hour game.

It’s clear that Ubisoft has taken some pointers from critically acclaimed open world games over the last couple of years (not just here but in Assassin’s Creed as well) and this is most obviously done in Far Cry 5 with missions. A lot of the side activity stuff is spontaneous and you kind of stumble into them. What’s especially cool is that when you free a captive you can hire them to fight by your side and these soldiers are actually useful (apart from driving). Side missions have their own little story arcs now, rather than just being a random instruction with no significance. Finally, the main story was told in an interesting fashion, too. There was no clear marker or starting point for a mission that started the one main story segment I played, it was only unlocked once I’d gained enough resistance points (earned by damaging Eden Gate property and killing loads of them) did the mission start. I didn’t have to seek the quest out, however, it came to me. I’d died on a different mission and instead of the usual reload screen my monitor went white. The next moment I was being kidnapped by John Seed, Joseph’s brother, whose region I was smashing up. It was something a bit different and I liked how it felt that my actions had been noticed by the bosses and then they were taking action. Again, making the world feel as if it doesn’t just exist for me. Another interesting note is that what I thought was a random NPC I saved from a wolf attack later actually turned up in said story mission, too.

Elsewhere, the shooting feels really tight and meaty here and the music is brilliant. With guitars and banjos and mandolins it really fits the vibe of Hope County perfectly. Then in combat situations it really builds up for some really suspenseful music. Made even better when attacking an outpost and one of Seed’s rambling, psychotic preaches is being played over the tannoy. Real Jonestown feeling.

And best of all, you can pet dogs and there are no towers!

So yeah, this is really more of the same Far Cry, but it feels as if the formula has been perfected now to make some truly chaotic, fun gameplay. I have concerns if the non-stop action will mean fatigue will set in and players won’t last the course of the game, but from the two I played I’m excited to play more.

Travel to this event was paid for by Ubisoft.
Liked it? Take a second to support GodisaGeek.com on Patreon!