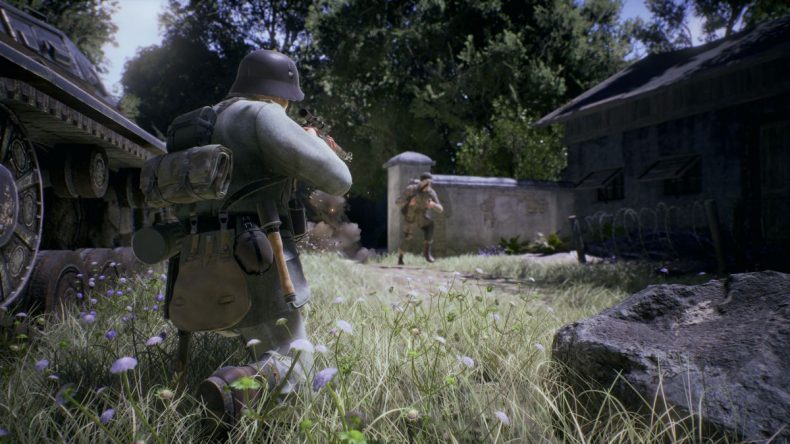 I remember playing a bit of the early Medal of Honour games in multiplayer, though my first experience of Call of Duty’s first game actually didn’t happen until the Xbox 360, when I picked up a cheap copy of Modern Warfare 2 that came with a download of Call of Duty Classic. War shooters, in particular the multiplayer side of them, have moved on an awful lot post-Modern Warfare, to the point that their particular brand of twitch shooting is reserved mostly for more colourful or aggressive games in the genre.

Medal of Honour is more-or-less dead, Battlefield’s scope is well beyond the size needed for twitch shooters and even Call of Duty has begun moving onto bigger maps. And zombies. Always with the zombies. But things are beginning to change a little, with Counter-Strike still being huge on the eSports stage and we’re seeing a massive resurgence of Rainbow Six Siege, as it has quietly built one of the best shooters this generation through a service-based model of sorts. And so, along comes Bulkhead Interactive, under the umbrella of The Square-Enix Collective (sounding like an incredibly menacing, shadowy corporation; though actually responsible for some great new games from smaller studios), with a game that aims to capture the essence of those early days of Call of Duty and Medal of Honour, bringing that fast-paced shooting back to World War II. Despite the size of the shoes Bulkhead has to fill, the studio had already done a remarkable job within the first week of Battalion 1944’s Early Access release on Steam. The servers are already stable and players are ready and waiting, but not for long because everything moves so quickly. With unranked matches that are purely for fun, complete with its own game mode, Wartide; as well as Arcade that sees players gather XP for their performances in a randomly chosen game mode (Team Deathmatch, Domination, Capture the Flag and Free For All were all available), though if you play anything like me you won’t earn much in the way of XP.

That would be the only really major problem I had with the game, truth be told. Now, I’m not expecting Bulkhead to suddenly cater for total noobs like myself (I mean, I’m basically about two decades too old for this kind of game) but team balancing is still a legitimate issue during these early stages. I can accept that sometimes you’ll simply get a bad team when playing with randoms, which is probably why the game offers an in-game party system for you and up to four friends, and often I was the weak link in any team that was unlucky enough to be lumbered with me, but that doesn’t explain why teams would almost always end the matches lopsided. Players seemingly drop in and out on a whim, and when teams are only made up of five players it can be a bit gruelling when you suddenly find yourself two or three people short, mid-game. Having said that, the first time I joined Arcade mode I was thrown straight into the middle of a game, presumably to fill in for one of these MIA teammates. The system isn’t perfect, it never is even when a game has the biggest of budgets, but Battalion 1944 has the unique position of possibly being able to fix these things through proper online testing, before the full release lands in around a year’s time.

As I mentioned a little ways above this sentence, teams are made up of five players, so the maps needed to be built accordingly. This has to be one of the most difficult jobs in creating an online shooter; if the maps are too big, players won’t be able to find one another and things will get boring, but it they’re too small it just becomes a killbox and nobody has any fun. Likewise, the design has to both match the period it’s portraying (in this case, World War II) and provide a visual style that allows players to see clearly to facilitate quick and fun gameplay. Bulkhead Interactive has managed to create a variety of maps that encompass both urban and forest/jungle environments, with more planned as development progresses, that all flow well and offer various choke points and open areas for different styles of combat. There are even spots catering to snipers, but the speedy nature of the game ensures that camping isn’t a viable option for long. These maps are aided in their authenticity by impressive visual design and a generally decent level of overall polish. There are plenty of graphical options for scalability, which helps cater for lower end machines to get in on the action; the minimum specs require a 3GHz processor and a GTX 660, with the recommended only asking for a GTX 970 or equivalent, so it’s not designed to cater only for the super rich. It’s also planned for eventual release on PS4 and Xbox One, for those without a gaming PC of any kind. The arsenal is impressive, catering to each class of soldier, with sniper rifles, shotguns, Thompsons and M1 Garands; plus there are more to unlock through prize crates. Now, before you get mad about those, the game is completely playable without them and the developer has been up front and transparent about the whole thing. If you don’t want to buy them, you don’t have to and it certainly won’t affect your experience. It’s possible to unlock weapons through gameplay rewards anyway.

Despite not having the budget of Call of Duty, Battlefield or Rainbow Six, Bulkhead Interactive has managed to create a multiplayer shooter that has the potential to carve out its own little slice of the market as it is. With another year in development, including time to tweak the balancing and add even more content to a surprisingly full package for an Early Access game, Battalion 1944 could well be one of 2018’s great success stories.