PUBG and Fortnite both deserve a place in your collection 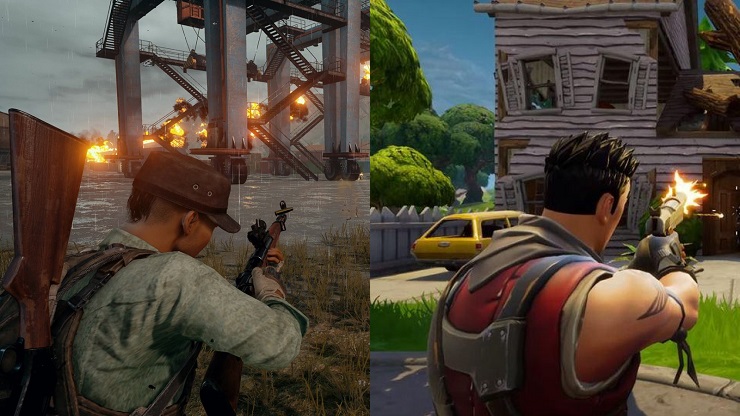 I’ve played a lot of these battle royale games lately, enjoying their different strengths and lamenting a few of their weaknesses. It’s fair to say that PlayerUnknown’s Battlegrounds kicked off this new genre, taking the world by storm last year on both PC and eventually Xbox One. People all over were asking when, or indeed if, it would come to Playstation 4.

Fortnite, on the other hand, released in its early access form to little fanfare. Its particular breed of tower defence gameplay was fun, its building aspects robust, but most people fell away from it quite quickly. Until Epic announced its own Battle Royale mode. Combining the main game’s building aspect and arcade action with the last-man-standing survival of PUBG, for free no less, many people began returning to Fortnite. PS4 players soon stopped asking about PUBG coming to their console and Epic’s game began its meteoric rise.

Let’s acknowledge the elephant in the room right now, shall we? Fortnite: Battle Royale kinda nabbed the idea from PUBG. There’s no denying it. The entire premise and particularly the Storm Circle idea came directly from Battlegrounds, but although I initially found this a bit disconcerting, it has become clear that Epic’s homage has earned the right to stand on its own. Yes, the basic idea is the same, but Fortnite’s shooting, building and destruction mechanics all combine to create an almost entirely different experience. PUBG, to me, is much better solo. There’s a real palpable sense of tension that runs throughout every single match, as you have to weigh up your options a lot more carefully while you attempt to survive. I’ve compared it several times to survival horror games, because not a moment goes by when you can relax. Paranoia grips you as you search houses for weapons and supplies; did you hear footsteps outside? Is someone already in here with you? Was that movement on the horizon, or just a bush? That’s all before you even engage in combat.

On the flipside, Fortnite in solo is way too fast-paced to be tense. You don’t die as quickly, unless you’re hit in the face point blank with a shotgun blast, so I found myself far more happy to wade into a fight. There’s less emphasis on sound, despite being able to hear the movements of others around you, or gunshots in the distance; it feels less about survival and more about getting into a fight.

Where the games really differ, especially when played by yourself, is a point that has to be given to Fortnite. Its constantly-shifting seasons bring new timed events, particularly the recent ‘teams of 20’ mode and the ‘50 v 50’ mode, both of which were far more inviting to players. PUBG has the advantage in having more than one map on PC, with a second coming to Xbox very soon, but the core objective remains the same. There’s nothing wrong with that of course, as its continued success shows, and the way each map looks and feels does force you to change your tactics; but Fortnite’s variety keeps things fresh on a regular basis. With these big team modes, solo players like myself can still jump in and maybe earn a win that I would otherwise struggle to achieve on my own. Even on PUBG, a game which I much prefer on my own, I’ve yet to get higher than third place. I mean, I’m happy with that as I’m not good at online shooters so third is higher than I ever expected to get, but others might not feel the same way. And it’s those players who are probably migrating to the competition, at least when it comes to playing solo. Playing in groups of up to four players though, is a different beast entirely. I’ve played PUBG in a team before, you might have even watched myself, Chris, Nicola and Adam as we failed spectacularly on the Xbox version; it removes almost all sense of tension from the game. You’re still watchful and things can still get quite intense, but you feel empowered by those at your side and it becomes more…videogamey, for lack of a better description. Fortnite however, thanks to its more fast-paced and arcadey nature, becomes far more fun as part of a team. The strengths of others can mask your weaknesses (mine is building, because I’m far too slow at it), but on the whole it just generally feels like Battle Royale was built around team play. Whereas in PUBG some of the tension is lost in team games, in Fortnite it creates a more fun dynamic, especially when you’re forced to start building a fort of your own in the final stages of a match. In PUBG, the final stages of matches, solo or team-based, invariably comes down to who can hide better in tall grass.

Both games could stand to learn from one another though, especially if they’re to stay competitive. Fortnite’s seasons and PUBG’s extra maps can only keep things fresh and exciting for so long, but what if both games used the competition’s ideas? PUBG on PC has the ability to have new things like the zombie mode, so why not bring that into the game as a full-fledged, timed event on both formats? Why not try something similar to Fortnite’s 50 vs 50 mode? Given the success of timed events in games like Overwatch, it makes sense that PUBG is now trying something similar to keep the game relevant. Fortnite: Battle Royale uses these events, but having a solitary map will soon begin to grow tiresome; adding in a new map, with more to come over time, would ensure that Fortnite stays the massive success that it currently is.

Of course, there is an argument for keeping both games very different from one another, in order to stop them from becoming homogenised. I think this is partially why the online FPS market has started to lose a few numbers, because games like Call of Duty and Battlefield, no matter how high quality they remain, have continued to use similar game modes for years now. PUBG proved that people wanted something new and Epic followed suit, which has seen Fortnite becoming bigger than anything else right now. People have argued that it’s because Battle Royale is free, but I just don’t think that is true at all. The initial download may be free, but I see more and more people spending their money on V-Bucks, perhaps more than I even see them buying FUT packs or Call of Duty expansions. At least for the moment, anyway. I mean, you only have to look at recent Twitch viewing figures to see that Fortnite and PUBG are right at the top end, above AAA games like Overwatch and Rainbow Six: Siege; Call of Duty is nowhere to be seen and FIFA isn’t even in the top ten. People simply want to see and play this new breed of battle royale shooter, more than they want to see the yearly biggest sellers from EA, Ubisoft and Activision. But which of these two games is the best? For me, PlayerUnknown’s Battlegrounds is more my speed in solo play, but when it comes to teams, I do enjoy the fun of Fortnite: Battle Royale. I’m not sure we even need to get into which is ‘best’ because they are so different, despite being born from the same idea. There really is room for both of these games in your collection, as far as I’m concerned. When I want to spend time playing a solo game, I’ll boot up PUBG and be fully immersed in a realistic environment with an incredibly tense atmosphere. I’ll enjoy the randomised nature of the weapon drops and employing stealth to keep myself alive, maybe one day long enough to win that Chicken Dinner. If I want to play in a team, I’d happily stay with PUBG, but when bolstered by a squad I’m much more reckless and up for a fight (in-game, I mean) and that’s where Fortnite: Battle Royale excels.

These two games have been tremendous successes, with sales figures breaking all kinds of records and now they’ve arrived on mobile devices, that success isn’t going to slow down anytime soon. Neither of them are perfect on any format, especially the Xbox version of PUBG, but that doesn’t make them any less fun to play.

I think D:Ream said it best, and it certainly applies here: things can only get better.

The Fortnite: Deep Freeze Bundle from WB next month is a code in box release with no disc or game card included

Fortnite Season 6 adds corrupted zones with shadow form, pets, a haunted castle, and more to Battle Royale on all platforms

Fortnite 3.6 is coming later today, downtime begins at 8 AM GMT