Fortnite Season 6 adds corrupted zones with shadow form, pets, a haunted castle, and more to Battle Royale on all platforms 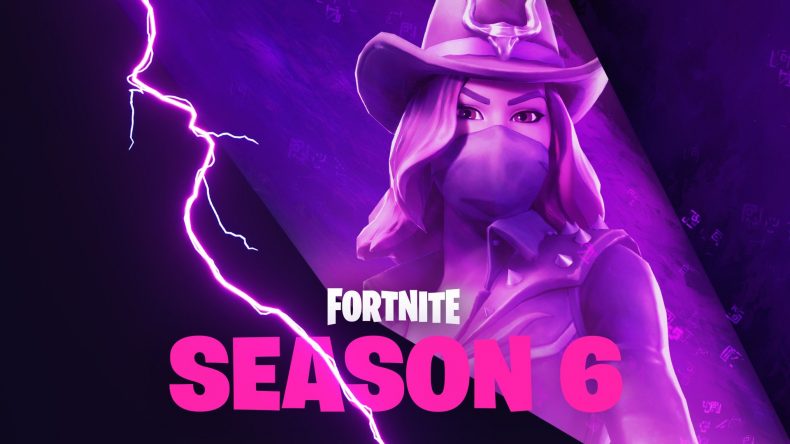 Season 6 has an updated island, shadow form, pets, and more. The island now has various new points of interest including corrupted zones. Check out the trailer below:

Full patch notes for Battle Royale are below:

Season 6 arrives in Battle Royale and brings new goodies with it! Uncover what’s in the new Battle Pass, explore an updated island with Pets, and become one with the shadows with a new consumable. Join in on the Cram Session mini-event in Save the World and learn more about a new enemy that has appeared from the Storm.

Pets (Battle Royale)
Always have a friend watching your back when you drop in. Pets are now available in-game!

Shadow Stones (Battle Royale)
Embrace the darkness with this new consumable that can be found around the map.

Updated Map (Battle Royale)
Islands floating, crops growing, Storm approaching. Changes have happened all over the map, glide in to find all of them now.

Shadow Stones
Consumable typically found around corrupted areas of the map.
Using a Shadow Stone will apply ‘Shadow Form’ for a brief period.
While in Shadow Form:
Unable to use weapons.
Become invisible to enemies when stationary.
You become more visible and leave behind a Shadow Trail when moving.
Gain increased movement speed, jump height and fall damage immunity.
Gain a new ability, Phase, can be activated by pressing the Primary Fire button.
Phase: Propels you in the direction you are facing, and allows you to pass through objects.
The effect lasts 45 seconds but can be exited early by holding down Alt Fire button (aim down sights).
Vaulted Impulse Grenade, Suppressed Submachine Gun, Light Machine Gun, Bouncer, and Remote Explosives.
All of the weapons/items added to the Vault in patch v6.0 will currently remain available in Playgrounds.
Added momentum functionality to Grapplers. When hitting a moving object (vehicle, player), its momentum will be added to your launch force.
This only happens when the momentum would be a net gain, you cannot lose momentum.
Grappler charges reduced from 15 to 10.
Double Barrel damage reduced from 143/150 to 114/120.
Reduced Dual Pistol floor loot drop chance from 1.49% to 0.88%.
Bug Fixes
Players will no longer be launched with greater force than intended when using the Grappler in a vehicle.
Using a Grappler while using a Launchpad will no longer cause inventory functionality issues.
The top half of a players model will no longer clip through walls when using the Grappler while crouched.
Fixed a visual issue that could cause the plunger to be visible on the Grappler while the projectile is active.
Players are no longer prevented from changing equipment when firing the Grappler while switching weapons.
Adjusted the timing of the Heavy Sniper reload animation to match more closely to when the bullet is reloaded.
Reduced the amount of force applied when shooting a vehicle with a Shotgun.

New Locations
Floating Island
Corrupted Areas
Corn Fields
Haunted Castle
Drop in and find the rest in-game!
Custom Controller Bindings
Choosing your configuration has changed to a selector on the left side of the menu.
After selecting Custom, the right side of the menu becomes buttons that are selectable. When a button is clicked, it opens a list of actions that can be assigned to that button.
Mode selection (Combat, Build) has changed to selectable by triggers. When in either Combat or Build mode, the actions for that mode and the actions that span between modes will appear in the “actions list” to select from.

Bug Fixes
Increased the precision and frequency of rotation values sent over the network so that changes to other player rotations and aim direction appear to be smoother.
Improvements made to prevent players from appearing to have jittery movement, especially during skydiving.
Caused by incorrect acceleration values being sent over the network.
This was also sometimes causing other players to appear to be using the wrong skydiving animation.

Optimized texture binding rendering code on Switch. This improved CPU and GPU performance, resulting in smoother gameplay and higher resolution rendering.
Optimized performance when many players are on screen.
Game thread optimizations
Optimized movement for supply drops.
Improved performance and memory for Android devices running Vulkan.
This affects the S9+ Adreno, Note 9 Adreno variants.
Memory optimizations for mobile to reduce the chance of encountering low performance when many apps are in the background

Players will now have an option in the Locker to select their preferred music choice. Unlock new music from the Season 6 Battle Pass.
Changed the processing of footsteps to add more contrast between above/below. Below steps now sound more “echoey” like they’re coming from the basement.
Footsteps will decrease in pitch the farther they are below you, and increase in pitch the higher they are above you.
The volume of footsteps blocked by terrain, buildings, or player built structures has been increased slightly.
Find more information on footstep audio updates here.
Increased the distance that you can hear open/close Glider sounds.
Increased the audio range for players skydiving to match that of players gliding.
Added a doppler pitch effect to the gliding audio.
This creates that “car pass by” effect as players fly overhead.
Bug Fixes
Fixed and added audio for the Plunja and Tat Axe pickaxes on mobile and Switch platforms.

Updated the Locker layout to fit more item types.
Bug Fixes
Removed trailing periods and added “the” in the appropriate place in the privacy screen.
The display of the purchase button area in the Battle Pass screen will no longer briefly show incorrect information on first entry.
Challenge headers will no longer show the wrong category name and style after scrolling.

Added improvements to Storm visualization, including rain & lightning effects which will increase as the Storm intensifies.
Bug Fixes
A minor visual change has been made to the mesh shirt underneath the arms of the Power Chord Outfit.
This is to fix visual issues caused by the mesh shirt during certain animations and emotes.

Replay playback speed can now be adjusted with a controller when the replay HUD is hidden.
Moved “High-Quality FX” flag to Lens settings, and automatically hide certain aperture & focus settings if the depth of field effect isn’t active.
Replays now correctly use the movement keys set in the Input settings.
Inverted the default direction of the third person camera to make the controls consistent with all the other cameras.
Bug Fixes
The third person camera now works with the inverted Y axis option.
Alt will no longer open the inventory screen while in a replay.
The “Skip Forward” button will no longer stop working during a paused replay.
Health bars no longer incorrectly animate when enabled while in replays.
Health bars no longer turn green when a downed player is eliminated.
Replay follow cameras no longer change targets every time the timeline changes or refreshes.
The drone attach camera position is now correct after the timeline has reset/refreshed.