Take down the Seeds with these tips for Far Cry 5 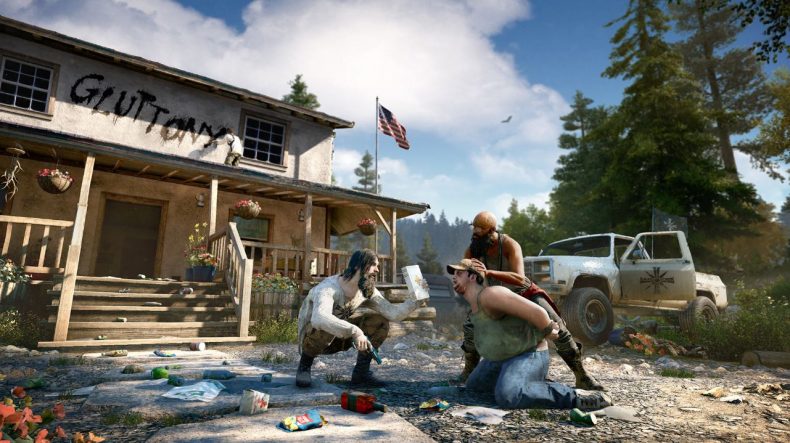 I’d have probably been the first to complain that out of all the possible setting for Far Cry 5, Ubisoft chose to head to modern day Montana, but that’s exactly what they’ve done with the fifth iteration (not counting spin-offs) of an open-world shooter franchise that has seen freaky Island of Dr Moreau powers and actual Prehistoric Earth. And now, having played the hell out of it, I can honestly say that I stand corrected. Far Cry 5 is absolutely what I hoped for but didn’t expect – which also means that, in keeping with the series sensibilities, is incredibly violent and not all that easy.

Luckily, we’re a nice bunch at God is a Geek, and so I’ve compiled a list of tips to keep you alive and kicking as you face down the insane followers of Father Joseph Seed, and attempt to return peace to Hope County, Montana.

Be a good neighbour

Now this can mean lots of things in Far Cry 5. Your primary goal as the unluckiest Sheriff’s Deputy in Montana is to help fortify the resistance against the Seed family. Almost everything you do against the Seeds earns you “Resistance Points”, which increase the number of allies at your disposal, reduce the number of enemies, and allow you access to better weaponry, upgrades, vehicles and outfits.

The best way to earn RP is to help people out. If you see a hostage being mistreated by a bunch of slack-jawed miscreants, free them. If you’re offered a side-quest by a plucky resistance fighter, get that shit done. Liberate outposts, destroy shrines to the Seeds, and generally raise hell for the God-bothering psychos who plague the County and you’ll reap the rewards. …And be prepared. Nothing kills you quicker in a Far Cry game than bad planning. If you have the materials, you can craft Molotovs, smoke bombs and remote explosives straight from the Weapon Wheel, so you should always try to make sure you’re stocked up before heading into a firefight.

Speaking of which, you can almost always recon an area before the shooting starts. Pressing Up on the D-pad will bring up your binoculars, which allow you to tag patrolling enemies and captured allies. You can also identify potential environmental hazards such as exploding barrels ahead of time. Us the terrain to your advantage and bring every tool you’ve got.

Perks are important. They allow you to unlock special skills like parachuting, wingsuiting and, erm, extreme angling – but they also improve your overall lethality and survivability. How you grow your character is entirely up to you, but consider sparing a few points to upgrade your favourite ally, especially if you tend to play solo.

Additionally, remember you can add upgrades, skins and attachments to your weapons at any Resistance shop in the County. Silencers and scopes are hugely important for stealth players, but extended mags and tweaks to damage output are good for everyone. Always be improving yourself. You don’t have to be stealthy to get by in Far Cry 5. You don’t need to tip a single freaking toe if you don’t want to, but discretion does have its benefits. For a start, it’s ridiculously satisfying to take out an entire outpost without making a peep, and there’s a special kind of catharsis that comes with executing an entire squad of insane hillbillies without raising a whimper.

But in addition to the sense of accomplishment, being stealthy tends to reward you more – especially in the case of outposts, because you get better rewards for completing them without triggering an alarm or being detected.

Anyone who has played a Far Cry before will know that the enemy is only half the problem; the wildlife, from sharks and wolves to sabretooth tigers and honey badgers (the latter being among the deadliest videogame enemies of all time), will repeatedly pop up to take you unawares and eat your face off.

There are few things more annoying than reconning an entire outpost, setting charges, analysing patrol routes and filling up your arsenal of explosives and tools, only to have it ruined by a suddenly over-excited grizzly bear. Or, while we’re on it, there’s nothing as frustrating as getting ready for your final, intricately planned assault, only to be pounced upon by an overly-friendly cougar (no, not one of your mum’s friends; we’re talking the leapy, toothy kind). In other words, respect Mother Nature in Far Cry 5, or she’ll destroy you for shits and giggles.

I accept that saving Hope County and, by extension, the rest of the United States from a crazed army of religious militants should rank pretty high on anyone’s list of priorities, but frankly you can only perforate so many heads and explode so many freaky, drug-soaked shrines before you need to unwind.

In Far Cry 5, rest and recreation come in three primary flavours: hunting, fishing and trailblazing. In order to do the first, you need nothing but a gun and some patience. Animal territories appear as permanent fixtures on your map the first time you find them, so hunting for skins is pretty easy and very lucrative. The latter simply requires patience and a rod, and again can be fairy lucrative if you do it a lot. Most importantly though, it’s relaxing. And finally, in order to go thrashing around Far Cry 5’s various pre-ordained race tracks, you’ll need to find special markers dedicated to bug-shit crazy local heroes and beat their times. It’s fun, if you don’t shatter a collarbone in the process. As with any social sport, murdering homicidal, drug-crazed hillbillies by the judicial application of bullets to faces in order to overthrow a religious despot whose narcotics-funded quest to take over the entire US of A has led to countless deaths and untold suffering is best enjoyed with friends.

There are plenty of allies to be found; almost anyone you rescue will grab a gun and fight with you, or you can find specialists at the various outposts armed with specific weapons. But the best allies are the NPC heroes you’ll find scattered around the County. Boomer the hound, for example, will retrieve weapons and sniff out danger, while archer Jess is a master of the silent kill. You can only take one of these special, unique allies out at a time, though, so make it a priority to unlock their missions first, and always take the right partner along for a given job. If you dismiss them, they’ll head back to where you found them until you need them again.

Alternatively, buddy up with real-world friends and tackle the Seeds together. Just as in Ghost Recon: Wildlands (which Far Cry 5 shares a lot of similarities with), co-op is drop-in, drop-out, so it’s a great game for social play – and there are few things as satisfying as storming an outpost with a mate.

This is probably the most important thing in Far Cry 5. Hop County is vast, filled with secrets and surprises, alternate routes and hidden treasures. Spend some time wandering off the beaten path, not just with the goal of unearthing an Easter Egg or finding a secret, but because it’s a beautiful, enormous place that deserves your attention.

Allies, weapons, vehicles, and outposts are scattered all across the map, and sometimes the story won’t direct you to them. You can only find them by heading out into the world and exploring, alone or with others. You never know where you might find a secret stash, a hidden challenge, or a new ally.

Senior Content Editor Mick has been playing games for over 30 years and writing about them for around 12. After drifting from site to site for a while, settling briefly at the now-defunct Made2Game and freelancing for the gone-but-not-forgotten NintendoGamer Magazine, he came at last to rest at Godisageek. Mick has been a reviewer, staff writer and content editor here for some time, while also moonlighting a little for Red Bull Games. He has 4 kids, has written 2 novels, and sometimes even manages to pay a bill or two. You'll usually find him defending the galaxy in Destiny 2, battling evil in Diablo 3, or lurking in the background on Twitter. Find him there @Jedi_Beats_Tank, or on XBL (JediWaster247), PSN (Jedi_Waster) or Nintendo (JediWaster).
MORE LIKE THIS
far cry 5Guidetips