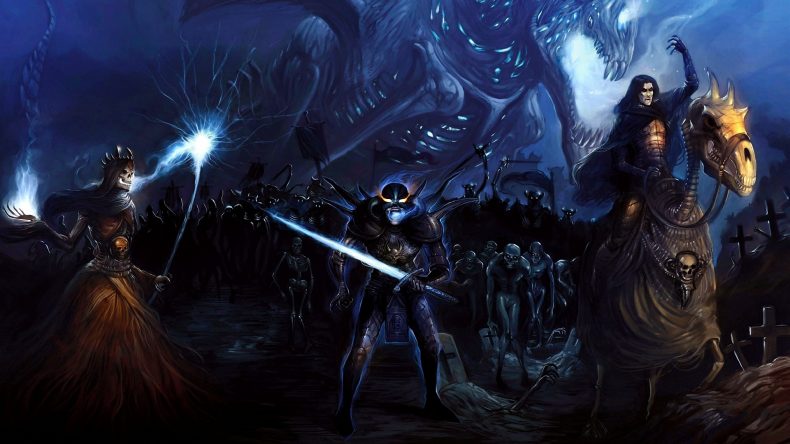 I always saw D&D as a step beyond my level of geekiness, a place where I’d be far too out of my depth to ever understand, or enjoy it. I’ve seen it pop up on TV shows, and I’ve heard about people playing it for decades, but I never gave it a shot. To say I enjoyed my first experience playing Dungeons & Dragons is an understatement; it allows your imagination to run freely, and to create a story with your friends where anything is possible. Imagine a fantasy RPG where you’re in full control of every action you do and everything you say – where you can attack, murder, dance, run away, or sing the national anthem in front of an enemy (obviously, you’re not going to do this, but it is an option if you’re a bit odd). The freedom and fun on offer in D&D far surpasses anything I’d tried before, and I intend to keep playing.

Dungeons & Dragons was first published in 1974 by Tactical Studies Rules, and created by Gary Gygax and Dave Arneson. It was acquired by Wizards of the Coast in 1997, and is currently on its 5th edition. The game has gone through many revisions to its rules and lore, but at the heart of it is a straightforward idea with lots of room to move. The intial set up to play can take a couple of hours, or more depending on how many people you’re playing with. My first game was played with my best mate Dan (as the Dungeon Master), my wife, and myself. You get a couple of sheets where you fill out your stats, all determined on dice rolls and a consultation of the Player’s Handbook. Creating a cool backstory also helps to build your character, and even the name you come up with has to fit with the standard boundaries of your race of choice. I was a Goliath Barbarian with a giant Warhammer called Kryyst, wandering the realm of Tal’Dorei (the setting of our campaign). My clan was murdered by a dragon, and my path to avenge them was set. Lauren was a Half-Elf bard called Lorholyn, who was a mage and singer able to cast spells through her music. Whilst I must admit, it was a struggle to get into character, it wasn’t long before we put on voices and really went for it. Thanks to God of War, I went full on Kratos, and had loads of fun calling everyone “boy.”

In terms of levels of players, it can be played by as many people as you want, however, a group of 6 works the best. There’s a Dungeon Master (DM) that leads the story, detailing the locations, and giving you narrative threads throughout. When I played, our DM had an idea for where the story was going, but said my wife and I took it in a different direction, so he had to improvise as we went. That’s kind of the beauty of it; each decision had consequences, and we all had to think on the spot, whether it was while in battle or on the road, investigating whatever we encountered. Each action requires a role of a polyhedral dice, and you use a standard set of 7. Sometimes, you have to roll to decide if you give an area a thorough investigation, or are proficient in talking to civilians. It can be frustrating when you roll a 4 and can’t open a trapdoor despite being a big, strong Goliath, but you laugh a lot, and it became a running joke the further we went. Our first session ended up lasting about 4 hours, but two of them were spent building our characters. We got drunk in a bar, recovered a corpse from a dingy cellar, fought goblins in the woods, found a decapitated horse in our search for two lovers, and brought happiness to a grieving family thanks to Lorholyn. I can’t wait to play again, and it’s not long before we all get back together and continue our game of Dungeons & Dragons.

If you’re looking to get into it yourself, there are some great starter packs on Amazon you can get. The Player’s Handbook and the Dungeon Master’s Guide are pretty expensive, but if you have a lot of fun playing and see it as something you’re going to do as a new hobby, it’s well worth the money. I’m still learning, but it’s a great adventure you can play with friends, and a pastime I’m glad is now in my life.

Features, Opinion
D&DDungeons and DragonsWizards of the Coast

Video games are cool. Don't let anybody tell you any different.
MORE LIKE THIS
D&DDungeons and DragonsWizards of the Coast