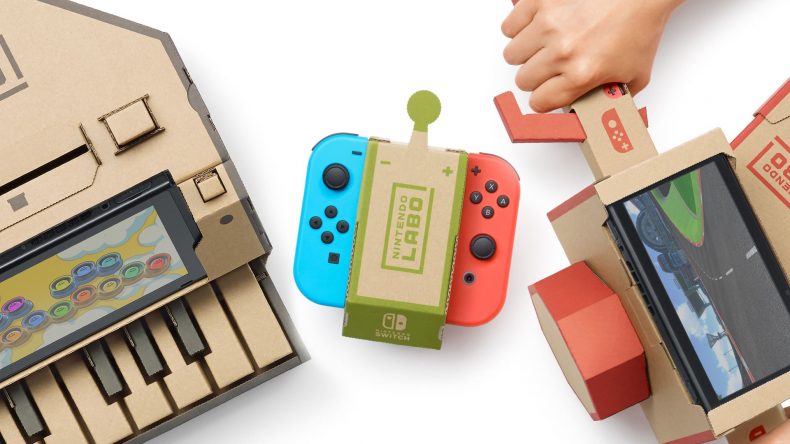 It started with one piece of cardboard. Granted, it had shapes to push out and lines to fold, but it was just a piece of cardboard. After following the straightforward instructions, and building it to make sure it matched what was on the screen, my very first creation was done. It was an RC Car, but it was my RC Car. I slotted in the two Joy Cons, put some googly eyes and antennas on it (with two normal pieces of red and white cardboard), and was ready for my first hands-on experience.

Picking up the Switch screen, I pressed the left and right controls, and away it went. My RC Car – or Gordon as he’s now known – preceded to move around the table. This was something else, something so simple, but so intuitive that I felt a heap of excitement knowing there was so much more to come. After spending two and a half hours at the Nintendo offices in Windsor, I came away with my mind blown. This isn’t a fad, or a bad idea – this is Nintendo doing what it does best. You may have seen the trailer, or followed the Nintendo Labo YouTube channel to see all the things you can do with the product, but it isn’t until you get to play with it that you understand its true potential. The controls are responsive, the diversity in each of the two base backs is phenomenal, and the ability to make your own inputs and outputs on a program that will ultimately control your own creations is utterly bonkers. Some of the models, like the piano and the house, have cardboard bolts which, when inserted, can alter the games you play or the sounds you make, and I still have no idea how this is possible.

The piano, for example, allows you to record your own compositions, change the sounds to feature cat meows or people squealing instead of the standard ivory tinkling, and more. That ‘more’ I’m referring to, is the ability to insert a piece of card into the top of the piano and create your own fish. Yep, you read that right. A fish. There’s an aquarium on the home screen that will feature all the fish you catch when playing with the fishing rod (another great model and accompanying game), and by cutting a shape into a small piece of card or paper and popping it into the piano, the Switch renders it to make your very own fish that’ll float around in the aquarium and appear in the fishing game. You can change the pattern and colour of it, add shapes of different sizes to its body, and even shove an eye or two on its head (or bottom if you fancy it). Moving on to the fishing rod, its a very relaxing experience, and one that you could spend hours playing. Obviously, all the models apart from Gordon were pre-built, so making some of the more complex models such as the rod, would see me there for a lot longer, but from playing with it, the design is something else. You use it like a real rod, and you lower the line, attempt to catch the fish, and reel the line in to put it in your aquarium.

Another interesting model was the motorbike handles. The game featured allows you to race around a track and compete for the best time. I also learned that you’d be able to make your own tracks, simply by waving the Joy Con around: something so simple, but original nonetheless. The house model had the Switch screen in its centre, and featured a little pet, which reminded me of a Tamagotchi, only much less demanding – and prettier. By attaching cardboard handles to the side of the house, you could play a minigame where you jump over bombs and collect gems, or you could spin another cardboard peripheral to make the pet run around a hamster wheel. Oh, and you can feed him jelly beans as well. The most complex model I got to see was the robot. A backpack filled with interlinking mechanisms, four units that connected to your feet and hands via sturdy string, and a headset with a visor attached (which can change your viewpoint from first to third-person). You control a robot on the TV screen by tilting left and right to move yourself, stomping the ground and punching to make the robot destroy things, and having the ability to fly and turn into a car that fires lasers. The more destruction you do, the higher score you get, and if your friends have built the robot as well, you can challenge them and beat their score. There’s also a calorie counter built in that monitors your progress, so when your parents or your partner is hassling you to go on a boring walk in the woods, become a robot and do it in the comfort of your own living room.

Of course, with all of the models mentioned, there are restrictions in what you can do as far as gameplay and mode choices go, but fun goes further than that. Grab a pack of felt tips, pick up the Pritt Stick and the multicoloured pipecleaners and pom pom balls, and go wild. Build legs out of straws, wings out of felt – let your imagination run wild. I can’t wait for my kids to play with Nintendo Labo, not just because of the games you can play, or the things you can build, but the fun you can have together creating some great aesthetics for the models. What’s beyond the cardboard toys, though? Surely you’ll get bored after racing around the same track, or playing Jurassic Park on the piano over and over again? The really interesting thing that Labo offers is the Discover section of the game. If you spend time learning how the inputs and outputs work (with the help of tutorials throughout), you can literally build anything out of cardboard, and that is where the fascination really lies. Imagine building a fully functioning tank, or a Dalek. What about a pirate ship, or even a robodog? You could do it providing you become familiar with how it all works. Obviously, the product isn’t even out yet, but the potential is phenomenal. The long game could see you using the motorbike model to use in Mario Kart, or a bow and arrow to use in Zelda. There was no mention of this, but if it’s successful, you have to wonder if they’ll go down that avenue.

I was massively impressed with what Labo has to offer. From the simple construction of the RC Car (which also has an infra-red and night-vision camera) to the detailed build of the robot, there is so much fun to be had. Whether you’re playing on your own, building with friends or family, or creating something entirely new, I’m so excited to see just what the future holds for Nintendo, and it may very well have outdone its greatest invention to date, the Wii.

Video games are cool. Don't let anybody tell you any different.
MORE LIKE THIS
Nintendo Labonintendo switch