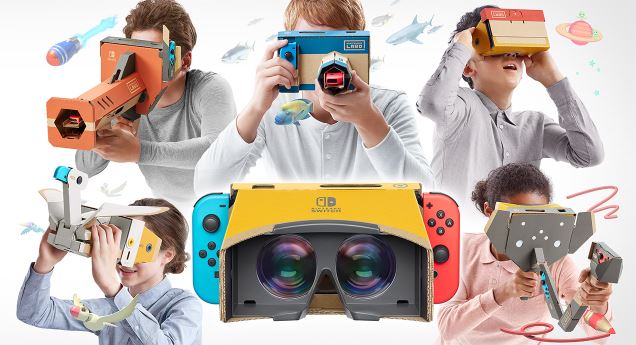 VR is coming to Nintendo Switch in April in the shape of Nintendo Labo’s Toy-Con 04, the VR Kit.

The set will come as a single pack of six Toy-Con to create, or as three separate packs of two. Overall there will be the VR Goggles, the Blaster, the Camera, the elephant, the Bird and the Wind Pedal, you will need the Starter set of the VR Goggles and Blaster to be able to use the other two separate sets.

So, the VR goggles will work with the Switch much like Google Cardboard works with an android device, and you’ll attach the other Toy-con to it to experience Nintendo’s own take on imaginative VR experiences. I can only hope that these new Toy-Con creations aren’t as flimsy as the last set.

Worryingly there’s no head-strap for the VR goggles, meaning you’ll need to hold them in place yourself, so it’ll be interesting how Nintendo sells this to people.

Toy-Con 04 VR Kit will arrive on Nintendo Switch on April 12. You can find out more info over on the official Nintendo site.

A lover, not a fighter and an all round good guy (he would say that, he wrote this after all), he's happy to be here as part of GIAG.
MORE LIKE THIS
LabonintendoNintendo Labonintendo switch

Podcast #295: Looking for a Whopper