previous
Fortnite Season 6 adds corrupted zones with shadow form, pets, a haunted castle, and more to Battle Royale on all platforms
random
next
Ideas for Days Out with Friends
7 comments 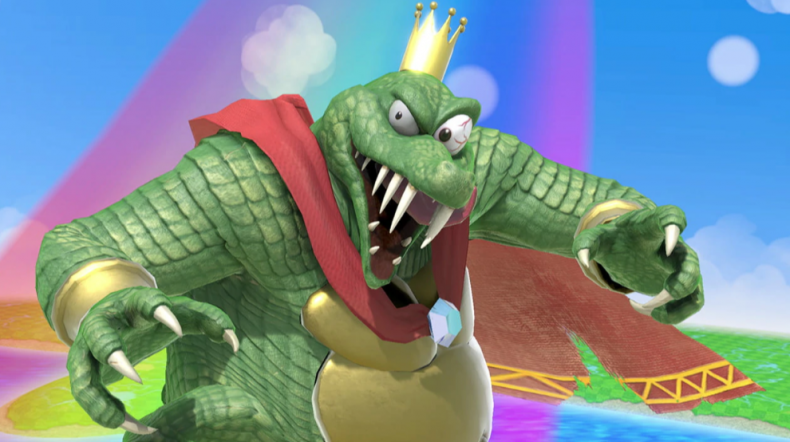 We all have those gaming moments that stay with us throughout our life. They may be touching emotional scenes, unforgettable set-pieces, comedy one-liners or moments of exhilaration that resonate so much with us, that they stick in our memories for far longer than they have any right to.

So back when I was watching the Nintendo Smash Direct, with the announcement that archenemy of Donkey Kong and family, King K. Rool will be joining the Super Smash Bros. Ultimate, I felt happy. I was involuntarily smiling as Nintendo showcased the King of the Kremling’s moveset playing out on-screen.

And the reason? I’d recalled one of those unforgettable moments, going back to just before the turn of the century, and perhaps my favourite boss fight I’d ever had the pleasure of playing. And with King K. Rool’s announcement in Nintendo’s latest Smash outing, it seems a good a time as any to talk about why that is.

You see, whilst others may lean towards other titles as the peak of Nintendo 64 Rare platformers, my heart will always go to Donkey Kong 64. I feel that it struck a great balance between the tight design of Banjo Kazooie, and the sprawling epic ambition of its sequel Banjo Tooie. And it opted for a quirky self-deprecating humour over the crude approach adopted by Conker’s Bad Fur Day. It showcased an adventure that moved seamlessly between five different playable characters, and incorporated the endearing style that was the hallmark of the golden age of Rare platformers on the Nintendo 64. It was also crammed with so many collectables, unlockables and little secret areas that to complete it 100% was a challenge in itself. All this culminated in an overall experience that made the game so enjoyable to play back in 1999. A game that good, better have a top-drawer final boss battle to finish off the overall experience. Luckily, Donkey Kong 64 didn’t disappoint.

The first thing that makes the final boss fight against King K. Rool so memorable is its setting. Continuing the humour from the main game, the final showdown sees you pitting off against the head of the Kremlings in a boxing ring, with the surrounding arena packed to the rafters with his minions, all there to cheer on their leader, and hopefully see Donkey Kong and his family get given a good beating. Naturally you’re there to make sure that doesn’t happen.

The whole event is hosted by an anthropomorphic microphone complete with a huge moustache and a little tuxedo, and we even get treated to little “in the red cornerrrrr” soundbites as well that always used to bring a smile to my face. Initially it appears it’s simply Donkey Kong facing off against Rool, but as becomes apparent at the end of each round, the bell to signify that the fight can continue is controlled by two Kremlings, who naturally want to keep their boss in the ring. So what ensues is five rounds instead, with each Kong in the game having to take down Rool in their own way before he can finally take no more, bell or no bell. So the setting is left-field and familiar at the same time, but what also appeals about this fight is that the different rounds taken up with different Kongs allows a real sense of variety in the final boss fight. Rather than just wailing on a boss for a certain amount of time until a pre-defined amount of damage has been caused like, say, a JRPG final boss, this battle will see you doing a wide range of things. One round you could be flying off in a jetpack and shooting at the arena’s fixtures, and another you could be shrinking down in size, and having your own personal fight with King K. Rool’s toes inside his trainer. Yes, really. It’s fair to say that no two rounds are the same, and that not only makes it stand out from the hundreds of other boss battles you’ve faced, but also makes it an enjoyable experience to try to conquer.

But what I probably like most about this boss battle, is that it really does feel like a culmination of what has gone before. If you think about your favourite final boss battles for a second, chances are the examples that spring to mind are those that really felt like you were not only honing your skills as a gamer, but all the moves and techniques you have learned in the game as well, and executing them together in clever ways. Another of my favourite final bosses is Ganondorf in Ocarina of Time for this very reason, because not only does it require timely swinging of the sword, but also requires deft use of the spin attack, light arrows and the hookshot all before you even do him any damage. Donkey Kong 64’s battle is no different. Here you’ll be perfecting barrel blasting, your music special move, weapon firing, flying and hand to hand combat, all on top of the normal dodging and manoeuvring required to stay alive long enough to find your opening. What this all means is that when you’re finally successful, and emerge victorious after all five rounds, it leaves you with slightly mixed emotions. Granted you’ll be happy that you’ve overcome the challenge in front of you, and pleased in the knowledge it was a real test of all that you have learned in the game. But because of the quirky humour, random setting and sheer variety on offer, there will also be a tinge of sadness that it’s all over. There’s no more rounds to fight, no more jokes to be made, no more ingenious ways to belittle your foe. And I think that is perhaps the biggest compliment I can give this fight, and why it is my favourite. I didn’t want it to end. I didn’t want a boss fight – an encounter where the entire goal of the game is to see it through – to end. It was that good, that entertaining, that memorable.

Is it any wonder I keep pining for a true 3D Donkey Kong sequel?

But what about you, what are your favourite final bosses? Which ones stick in your head? Let us know in the comments below.