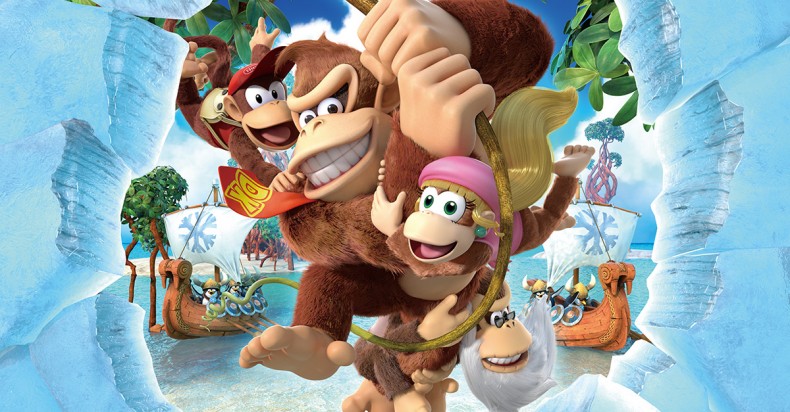 Looking back at the Wii U library, there aren’t many games left that I’d like to see hit the Switch. Xenoblade Chronicles X and Tokyo Mirage Sessions #FE are obviously at the top, but before the game being reviewed here, Tropical Freeze was right up there as my most wanted ports on the Switch. Having only played a few hours of Tropical Freeze on the Wii U, I was more than ready to play it on a portable system that is exponentially more fun to use and the end result is pretty great.

Tropical Freeze from Retro Studios is another entry in the Donkey Kong Country series and is a sequel to Country Returns that’s on Wii and Nintendo 3DS. It is a side scroller platformer with some superlative level design and an ever better soundtrack.

Donkey Kong is celebrating his birthday with Diddy, Cranky, and Dixie when the island gets enveloped in an arctic flavour. The Snowmads are DK’s nemesis for this entry and all the Kongs will stop at nothing to sort this mess out and make the island go from a Tropical Freeze to a Tropical breeze. While the story obviously isn’t really important, the opening is very well done and the moment the snowflake settles on the candle putting it out is pretty funny. This adventure is split up across multiple islands with their own bosses and enemy types. Level design is something that has always been praised for Tropical Freeze and I finally see that. While I think they could do more in the funky mode to make it accessible to newcomers to platformers like Celeste, the only real flaw with the level design involves how some vehicle sections have sudden changes that result in some trial and error, and time wasting through checkpoints. It is a fantastic feeling executing a difficult section by basically using enemies as consumable platforms in a series of well timed jumps. Of course Tropical Freeze isn’t just a solo experience. You can play in co-op with a friend on the same Switch and they can be either of the new Kongs that help out in some form through individual skills.

Bosses here deserve a special mention. I think Tropical Freeze has the best first boss in recent times in gaming. That whole level is beyond anything really and the kickass theme almost feels like it should’ve been the final boss theme instead of the first one. If you’re expecting a Shadow of the Colossus or Mario Kart 8 Deluxe situation in terms of remake or port content, prepare to be disappointed. Tropical Freeze on Switch has one interesting new way to play the game but it is mostly just a straight port with higher resolution visuals docked and much better load times. I can’t stress enough how much better the load times are here and how well this suits the pickup and play nature. Funky Mode is brilliant as a concept and it will no doubt make the game more accessible for newcomers to platformers or fans in general. It’s pretty hard overall and Funky mode will make it far more approachable. You can still die on pitfalls without equipping certain items before a level so this isn’t a god mode like Celeste’s assist mode when its tweaked. I was also quite disappointed to see HD Rumble not used as well as it was in Super Mario Odyssey. It is implemented like pretty traditionally vibration functionality on other platforms.

Docked, this looks and plays lovely. The art direction shines at just about any resolution but it is just plain gorgeous docked on the big screen. Handheld mode sadly isn’t native resolution so while it isn’t as low as Xenoblade Chronicles 2 gets, it appears softer than it should be during gameplay. Performance is thankfully ace throughout with one minor annoyance in how some loading screens or menu transitions stutter a bit. Nothing major, mind you. David Wise and co’s score here is probably still my favourite thing about the game. The first boss music and the underwater levels are spectacular. I only hope Nintendo actually does a proper soundtrack release since the game is now on a platform that’s massively successful. Far too many Nintendo game soundtracks are trapped without a proper release and it makes me sad. I’m going off on a tangent here but I would do many things for a proper release of the Animal Crossing: New Leaf score.

While I would’ve loved a more accessible mode so I could recommend this release to more people, the only real drawback is the asking price for people who have already played this game. If you’ve never played this before, you owe it to yourself to play one of the best Nintendo platformers in recent times. If you have played it on the Wii U, I’m not sure the draw of portability is enough to warrant a full priced purchase.

Tropical Freeze has been given a new life on the Switch. The huge improvements to load times and resolution bump ensure newcomers will get the definitive experience of one of the best platformers out there but I still think there isn’t enough to warrant a day one purchase for people who already experienced this game.

Sub native resolution in handheld mode
Not much for returning players

Donkey Kong Country: Tropical Freeze is a fantastic platformer for new players on the Switch but doesn't offer much for returning fans.