previous
Negan and Lucille are on their way to Tekken 7
random
next
Outward has a promising approach to survival, but lacks in the RPG department
0 comments 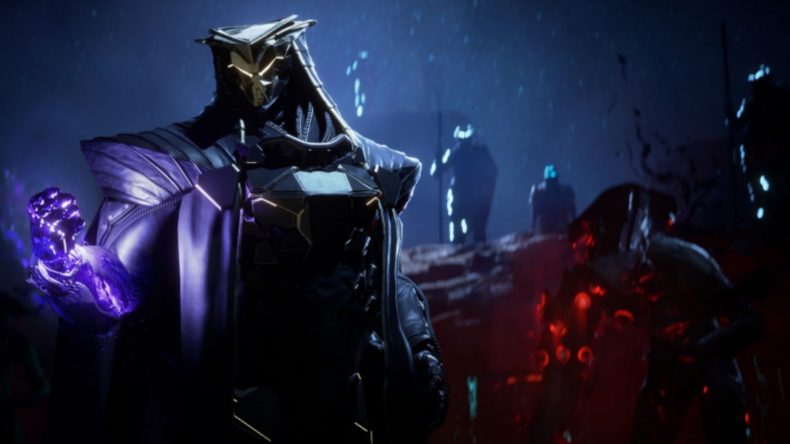 Thanks to a frustratingly convoluted release schedule, Anthem is currently available to any PC gamer with an EA Origins Prime subscription (who can play the whole game now), any Xbox One gamer with an EA Access subscription (who can play 10 hours of the game now), and PS4 gamers (who can watch videos of it on YouTube, sorry). Having spent countless hours with both demos, the PC launch version and the Xbox One Access trial, I can now bring you our initial impressions of BioWare’s ambitious loot-shooter, as well as my opinion on things that need immediate improvement. First of all, I should start by saying that I’ve not only been hyped for Anthem for several years, but that I’m also a prolific apologiser when it comes to looters in general. That’s full disclosure right there, and I’m being honest off the bat because it’s important that you know just how keen I was for Anthem to be a true groundbreaker, and how disappointed I am that, at brass tacks-level, it’s just another sci-fi lootathon.

Which is not to say it’s bad. In fact, had my expectations of Anthem been lower, or even normal, I probably wouldn’t be half as disheartened by some of the design choices. I put it up on a pedestal, and extended its free fall distance considerably. But a lot of us did, and why wouldn’t we? A BioWare RPG with elements cherry-picked from one of the most popular emerging genres of this generation, bankrolled by EA who, let’s be honest, aren’t short of a few quid. This should be spectacular – and bits of it are, to be clear; just not all of it. Or even most of it.

In Anthem you take the role of a Freelancer, an Iron Man (or Woman) for hire, whose job is to protect the savage frontier of a world called Bastion from all manner of villains and beasties who want to take control of the Anthem of Creation, a powerful terraforming device left behind by a race of absentee gods. Having fallen on hard times recently, Freelancers are now little more than mercenaries, picking up contracts for Coin, defending settlements, finding missing persons and basically running errands. They do all of this while piloting an exosuit called a Javelin, which is perhaps the single coolest video game creation this generation; a walking tank capable of a multitude of loadout variants and fully autonomous flight. The Javelins are just excellent. Speaking of which, one element of Anthem that’s turning out to be better than I expected is the story. There’s a wealth of lore and backstory to be found in the game thanks to the Cortex, a kind of encyclopaedia you build by finding collectibles in typical BioWare fashion. There are also reams of dialogue to flesh out characters and events, and the fully-rendered cutscenes are mostly excellent, showing off some amazing facial mo-cap and impressive delivery. The problem isn’t the story, but the storytelling. Anthem presents its story via the dual mediums of first-person dialogue and in-mission flavour chatter. The former works fine during the aforementioned cutscenes, but falls apart a little when you have to basically stand rooted to the spot as a character delivers exposition in a mechanic that felt old in Skyrim and feels ancient now. You’re offered dialogue choices, but they’re not even really binary, as several of them result in more or less the same dialogue from your Freelancer and they don’t seem to affect anything. The latter medium, whereby you’re supposed to listen to important details during a life or death firefight is just a little infuriating for obvious reasons.

Oddly, there a few cutscenes in third person where you can see your Freelancer, and these were the ones I actually preferred. In fact, the whole switch to first person for some cutscenes and the whole of your time in Fort Tarsis is a strange choice. Obviously BioWare want you to feel “in the moment” but it’s unnecessary. I spent 3 entire games watching Commander Shepard walk around and was never less than fully immersed. I can commend the world-building in Anthem; I can see what BioWare were going for, and if nothing else it feels like a world they want us to come back to. It has room to grow, and the characters that exist in it now feel part of it – I just wish Fort Tarsis wasn’t such hard work. The lack of placeable waypoints means you need to navigate by compass, and everyone is so far from everyone else that just picking up a new round of contracts is a major arse-ache. It’s compounded by the fact that you can do everything, including shop, pick up jobs and customise your Javelin, in the single-room Launch Bay. You don’t need Tarsis at all.

I’m happy to report that I’ve seen very few issues on PC, with the performance as a whole a vast improvement on the hit-and-miss demos. Even on a standard Xbox One minus the bells and whistles of the X, it also runs better, at a more or less steady 30 fps. I did experience a few bugs on console, however, as the game crashed once during the 10-hour trial period and froze for a worryingly long time on 3 occasions. There is a performance patch coming on Day One, however, which may address that, though I also had an irritating issue whereby the Y-Axis would revert to standard when I loaded in and I had to change it every time. For me, the biggest issue Anthem has right now is the loading times. I’ve never seen a modern game with so many loading screens, and some of them are utterly unnecessary. There’s an incredibly intrusive feature whereby if you fall behind your squad, a tethering mechanism kicks in and drags you forward via a loading screen. The fact that this happens when you’re barely 100 yards away in the same instance is mind-boggling, but more irksome is the frequency at which it happens. Anthem’s world is designed to be explored. You’re encouraged to seek out treasure chests and crafting materials and secrets, but if you do so during a mission you’re almost immediately punished for it. There’s absolutely no need to do this unless your squad is entering another mission area, and frankly it needs to go.

Anthem’s saving grace – and believe me when I say it is enough to save it – is the action. Whether you’re flying through Bastion’s gloriously beautiful environments or engaged in a desperate firefight, this is where Anthem shines. It’s not spotless, of course, and there’s room for improvement where damage feedback and difficulty balancing are concerned, but Anthem is at its absolute best when you’re using your entire arsenal, working with your squad, and utilising the terrain. There’s a verticality to Anthem that I never knew was missing from other shooters until now. Flight is only part of it, since clicking the right stick (on an Xbox controller) will allow you to hover, giving you a height advantage at any time. It’s great for getting out of the immediate crossfire, repositioning, or popping off a few sniper shots to remove a pesky turret from the equation. It’s all helped along by the incredible sound direction, the satisfying clink of a successful combo, the rumble of explosions, the rattle of gunfire and the empowering roar of your Javelin taking off.

It’s too early for us to talk in-depth about the endgame or the loot economy, but the latter is currently a little concerning. Even legendary weapons appear to be the same as standard in terms of aesthetics, and this tier could really benefit from some unique or exotic designs to make them worth farming for. I’ve also seen no new armour variants dropping, which is very worrying. The loot does fall fairly thick and fast, perhaps too thick, as I’m always too impatient to really bother analysing what I got at the end-of-mission screen. I’ve also yet to fully get my head around the Gear Score, which I think determines your Javelin’s overall level which in turn affects which rarity of loot you’re more likely to get, but at the moment seems like an arbitrary mechanic used just because other loot-shooters do it. I fail to see, yet, how it really benefits Anthem. So far I have a few issues with the reward screen, too. It’s nice to see the Alliance score going up, but the game does a poor job of explaining what that means, and it gives me a bunch of shiny medals every mission with zero context and no way to track them, so I fail to understand the purpose of it all. Likewise, I’ve reached higher loyalty levels with two of the factions but either didn’t receive rewards or I’m looking in the wrong place. This stuff should be explained in laymen’s terms; right now it’s as if the whole game was designed by committee, and there’s a bunch of stuff included just to appease an imaginary demographic.

I’ve a ways to go yet in Anthem’s campaign and then there’s the whole endgame to tackle, so there’s room for things to change. If the mission variety improves and the loot economy picks up in the elder game, I’ll be much happier. What I can say without blinking is that I’m enjoying Anthem. It’s a likeable game with an interesting world and a few things I’ve never, ever seen before, but it’s also a frustrating experience at times. It feels finished, to me, so I’m not going to excuse BioWare of a lack of demonstrable effort in any area, but there are some weird design choices throughout that make me wonder how they passed the testing stage.

There’ll be a full, scored review and video up in the next few weeks when I’ve spent enough time with Anthem to give it a fair trial, but right now it’s enough to say that what’s here is decent, and will certainly scratch the shooting and looting itch if you’ve got it, but the next month or so is going to be a very, very interesting time for BioWare.

Senior Content Editor Mick has been playing games for over 30 years and writing about them for around 12. After drifting from site to site for a while, settling briefly at the now-defunct Made2Game and freelancing for the gone-but-not-forgotten NintendoGamer Magazine, he came at last to rest at Godisageek. Mick has been a reviewer, staff writer and content editor here for some time, while also moonlighting a little for Red Bull Games. He has 4 kids, has written 2 novels, and sometimes even manages to pay a bill or two. You'll usually find him defending the galaxy in Destiny 2, battling evil in Diablo 3, or lurking in the background on Twitter. Find him there @Jedi_Beats_Tank, or on XBL (JediWaster247), PSN (Jedi_Waster) or Nintendo (JediWaster).
MORE LIKE THIS
anthemBiowareEA