Katana Zero will make you feel like a bad-ass ninja 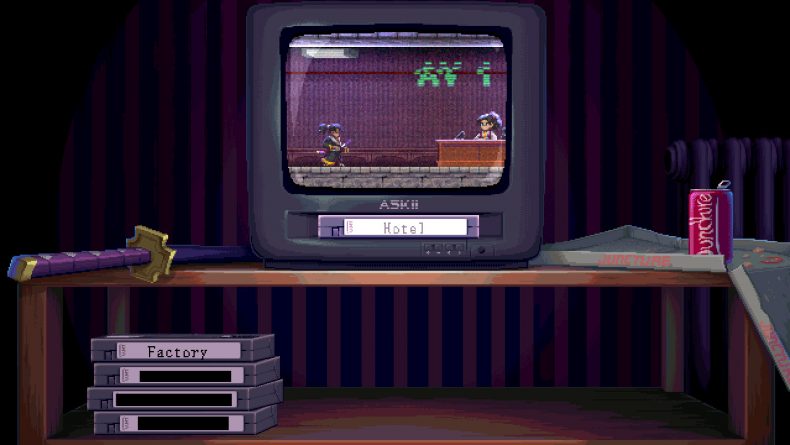 What superpower would you most like to have? Would it be super strength, invisibility or flight? How about the ability to see the future? You could become like Doctor Strange and foresee every permutation of the future, including the one where Star Lord is a complete idiot. Or you could be like Nicolas Cage in mediocre action thriller Next and by seeing the future you could change it until you get your desired outcome. Now imagine you have that ability and you’re a katana-wielding ninja in a kimono creating havoc for bad guys wherever you go. That’s right, things are about to get awesome.

I’ve been playing a preview of Katana Zero, a 2D side-scrolling slasher title where you are up against numerous goons equipped with everything from their bare fists to automatic weaponry, all hell-bent on stopping your progress. If any one of them succeeds in landing a hit, then you have to start over, and here is where your ability to see the future comes into play. The way it works is actually all of your attempts to clear the area, are you just “planning” to do so in your mind, essentially playing through different scenarios until you succeed. Then upon completion, a message pops up saying that that approach should work, and then you are treated to a replay of your exact events that cleared the section, the idea being, this is actually the reality of what your character did to progress. Controls are relatively simple, with movement and jumping, and then your basic attack will swing your sword. There’s also the ability to pick up items lying about, Streets of Rage style, and use them as a single-use projectiles, good for killing foes from afar. But you also have a couple of other abilities that ramp up the awesomeness and give you a fighting chance. An invincibility roll akin to Dead Cells is at your disposal, which can get you out of certain scrapes if timed correctly, but by far the most useful ability is where you can slow down time. In the main this allows for more precise attacks in heated situations, but can also be used against gun-wielding enemies to time a katana swing to deflect their bullets right back at them, ramping the awesomeness factor up to 11.

All this combines together for a core gameplay that works incredibly well. It’s simple to grasp, but each stage will require thoughtful planning, and likely a fair amount of trial and error. But it’s trial and error in a good way, as you clearly learn and improve as you go, finding previously tough sections a breeze as you have mastered how best to tackle them. Retrying is incredibly quick, so the fast flow of the game isn’t disturbed by failure. The controls seem quick and responsive, and the abilities of your character are varied enough to overcome situations in a variety of ways. There may even be multiple routes around certain environments, leaving it to you to figure out the best way to take down all the enemies. And whilst most of the environments feel similar – being 2D interior settings filled with rooms and corridors – the preview (which is about the first half of the game), has already shown off some different scenarios. In it I was dodging searchlights in a prison, busting some shapes to blend in on a nightclub dance-floor, and even riding a mine-cart like something out of Donkey Kong Country. So suffice to say, there’s enough points of difference in here to keep the gameplay feeling fresh.

Interspersed between the core gameplay is a woven story that is intriguing and so far, well done. It clearly has some adult themes which can shock at times either by their events, or the language used by some of the characters, but it fits in nicely with the slicing and dicing carnage of your character. This story was never going to be one of rainbows and unicorns. And by the end of the preview section, I was left wanting more, to understand more of my backstory that I was piecing together, to understand why I can manipulate time, and why all these characters have such vested interest in it together. Playing the second half will be an absolute must for me to see how it all wraps up. But the story itself isn’t completely passive. You have dialogue options in conversation that can have different outcomes on the story or the reactions of other characters. You also have the ability to interrupt characters, normally with a snipe, quick four-letter jibe or even a very final swing of your sword in their direction, depending on who you’re talking to. Different actions and responses to your employers for example illicit different evaluations from them, which changes how satisfied they are with you after various missions. It remains to be seen, with multiple playthroughs of the final release, just how different these responses can make the final outcome, but I would hope given their inclusion in the game, that at least different endings can be achieved.

So, the preview of Katana Zero did exactly what it needed to. It drew me in, and left me wanting the rest of the game, both for a conclusion to the story, and just more of that fun, fluid and varied gameplay. It seems to strike a good balance between challenge and progression, and is fair in its difficulty, meaning if you died, its because you made a mistake in assessing the situation. And when you do finally beat a stage, and get to watch a replay of your feat, the pull to watch that never gets old. It’s a lovely ego rub that just makes you feel good about yourself, particularly if a section had been bugging you for a while, or the method of you clearing it was fast and smooth, like a proper ninja. It’s the closest most of us will get to being a total bad-ass, to having a real superpower, but for that reason, I can’t wait until March when Katana Zero is released in full.