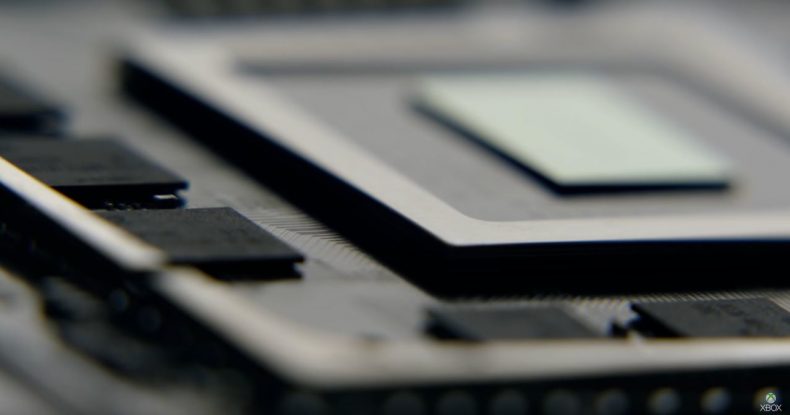 Last night during the Microsoft E3 briefing we saw the announcement of the next Xbox console, currently labelled Project Scarlett.

Microsoft have announced the new Xbox will use a custom designed AMD Zen 2 CPU, which is particularly interesting because Sony have also released information stating their new PlayStation will carry an AMD Ryzen chip. Newer Ryzen chips actually use Zen 2 architecture, so it’d be safe to assume both consoles will have very similar performance from the CPU and graphics cards, perhaps making developers’ lives easier.

There’s a huge emphasis on redesigned SSDs from both Microsoft and Sony, which is pleasing to hear because it’ll mean dramatically reduced load times. Adam recently reviewed an NVMe SSD which is very similar technology – a newer speedier SSD that can be used as both hard drive space and virtual memory. But let’s not get distracted by faster load times, what we really want to know is will we actually be able to get the full performance out of these new devices?

We’ve got to look very closely at the wording and marketing spin being use to understand how much punch these new consoles are actually going to pack. Sony have said the PS5 will support ‘up to 8K graphics’ and will be able to handle 4k graphics at a 120Hz refresh rate, that implies we’ll see a 8k/60fps vs 4k/120fps trade-off. Microsoft mentioned ‘variable refresh rate support’ and frame-rates of ‘up to 120 fps’, so it’s reasonable to assume the exact same setup. Both have mentioned support for ray-tracing on top of that.

Project Scarlett will feature GDDR6 RAM, and we can’t imagine the PlayStation 5 would have anything less. While it hasn’t been announce how much RAM these console will have, we would expect to see at least 16GB in each, which would be double that of the current generation.

All this excitement considered, let’s not forget it took a console re-hash for the Xbox One and PlayStation to finally receive true 4k support at 60Hz, which were both really only 1080p consoles until the launch of the Xbox One S and PlayStation Pro. Even now, not many games manage to hit those high-end limits smoothly and consistently. Then there’s the Nintendo Switch which seems to have numerous hardware profiles available to different developers. We can only hope devs really push these new consoles to their limit, with full 4k/120fps fidelity from day one. If we see some games hitting 8k and not budging below 60 fps that might be alright, too, but 4k 120fps definitely seems to be the new 1080p 60fps.

Would definitely risk it, for a chocolate biscuit.
MORE LIKE THIS
PlayStation 5project scarlett