Ancestors: The Humankind Odyssey is gaming evolution (so far) 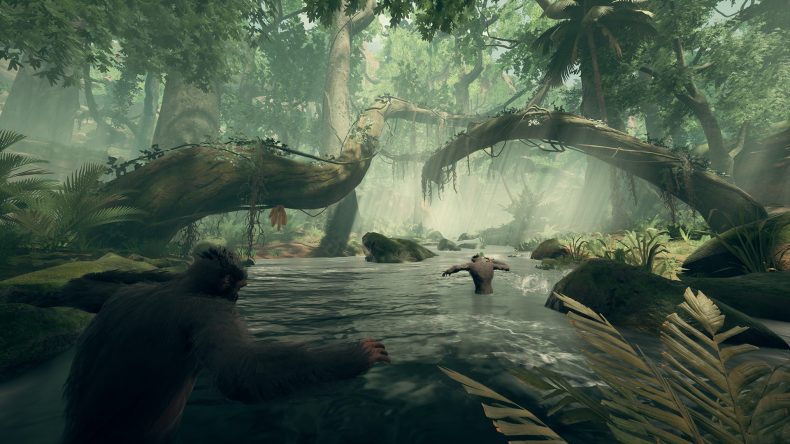 Remember how we evolved from Monkeys? You really need to be aware that if you’re going to experience Ancestors, you will do so not at a human experience, but in an animalistic one. This isn’t something you can change vicariously or through your own actions, you’re destined to evolve, and it’ll be the best thing to happen to you.

Right from the start you’re introduced to the harsh world of primitive man in that a mother is taken from her child and the child now needs to find a way to survive. From there control changes to an adult of a clan of apes nearby and you need to find the lost child. Navigation (in what is to the player a hostile, alien world) is tricky, picking out recognizable landmarks in a sea of trees is more difficult than finding a good joke in an Adam Sandler film and as an early man you have the memory of a goldfish but the strength and agility of an ape. This is not a world you can brute force your way around. Your need to learn is echoed by your avatar and what they need to do. Using your animal instincts you can detect smells and sounds nearby and once you’ve identified something in the near area you can memorise it and approach it. You’ll notice that anything and everything to begin with is coated with a miasma as the unknown is scary and potentially deadly to a simple creature. Until you know what it is; everything is a potential threat, and learning what things are and what they can do for or to you is how you learn about your surroundings and get your bearings.

Wandering in to new territories in Ancestors initiates a sense of hysteria and only by investigating something and developing familiarity with your environment can you regain dopamine and calm yourself down. This is, at the core, a survival game – albeit one where the personal growth obtained from managing to navigate the perils the environment throws your way is integrally tied to progress through the game, and it’s here where Ancestors is at its most fascinating.

Discoveries and actions aid your primitive brain and those of your clan of ape like men and the more things you discover the better you get at making these discoveries. For instance, determining the existence of things using your hearing and smelling senses allows you to unlock a node that grants the ability to find things from greater distances away. Being good at fighting will make you better at commanding your clan, and having them at your side can make dealing with the harsh wildlife of the forest much easier than a lone ape could possibly find it. As you unlock these nodes you can choose ones to lock in place, of which the number can increase as you learn more and more things, later if you find a mate and have a child, you can then choose to evolve taking things forward fifteen years and find things have moved on and the children are now in the process of discovering this world as you did, only with the leg up you provided them through the locked nodes.

I’m still early in the game, really, and have to push further before I can truly comment on how good it is. But after initial confusion in how the game wants to funnel you into its mechanics I found this almost by accident. Realistically though, the confusion and the fact things aren’t clearly laid out for you is keeping with the nature of the spirit of the game. As a developing species you should struggle, but also improve as you learn. Employing awkward control schemes as a direct gameplay element is something that has been done before, but here it’s integral to the experience and if anything makes the game make more sense.

Ancestors: The Humankind Odyssey is something that requires time to take in all of its intricacies and formulate thoughts on. It feels as though speeding through it at a rate of knots would do it a disservice and I need to give it the care and attention your avatar, your clan, and your offspring deserve. Review coming soon, then.

A lover, not a fighter and an all round good guy (he would say that, he wrote this after all), he's happy to be here as part of GIAG.
MORE LIKE THIS
Ancestors: The Humankind OdysseyPanache Digital Gamespatrice desiletsprivate division

Ancestors: The Humankind Odyssey gets a release date

Ancestors: The Humankind Odyssey review
Support us on Patreon for exclusive content