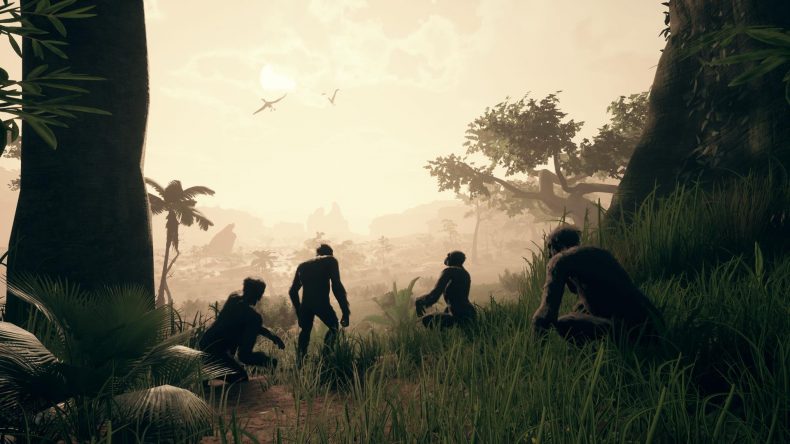 I’m cold, bleeding and I broke my leg. I can’t remember where my settlement is despite memorising it over and over again, it’s raining, my vision is blurry and suddenly my senses are heightened – I’m being attacked. Because of my blurry vision I can’t see where the attack is coming from and my broken leg has completely dulled my reactions. After a dodge that can only be described as clumsy I now find myself poisoned. Somehow I manage to escape and run, I’m tired and hungry, I stop, pick a berry and eat it, but it was rotten and because of all that went before I now die. Welcome to Ancestors.

The world in which our distant ancestors made their home was cruel and full of danger, and it’s here, millions of years ago, where you find yourself controlling a hominid with no real goal except to continue your lineage and evolve. There are no quest markers here, no minimap and no hand-holding, the environment is yours to explore and by god is it a gorgeous world to look at.

In the dense forest the sun sends shafts of light through the leafy canopies, large trees punctuate the vast expanse, vines hang tentatively waiting for you to swing from them to another tree; this is probably the most amazing jungle you’ve seen created in a videogame and it’s just so big. Step away from the safety of your settlement and you’ll find waterfalls, swampland and rocky outcrops, but discovery comes with risks as there are lots of things out there that want to kill you, and sensory overload because the constant stream of new things can see your hominid become hysterical. Hysteria is an odd mechanic in Ancestors. Being somewhere unfamiliar causes your vision to grey out and the screen flashes with images of dangerous creatures around you. The only way to stop this is to get investigating, check out the local flora, pick up rocks, familiarise yourself with the environment and eventually you’ll calm down and then you can get on with finding a new settlement and expanding the amount of places you can call home. Discovery isn’t just about places either; stopping and either listening or smelling can lead to something you’ve never seen before. Find a rock and pick it up, and you’ll discover a tool that’s very handy for bashing stuff with; snap a branch off a bush and you’ve got something you can hit stuff with. This also has a positive effect on making you seem bigger, which when you want to intimidate a predator comes in very handy.

Everything you do in Ancestors is learning, and all this learning starts firing up the neurons in your hominid’s brain, and from your settlement you can access your evolutionary path which naturally takes the form of a skill tree. Unlocked nodes here can be activated and will give your current hominid a leg up for future discoveries. But continuing your lineage isn’t as simple as making discoveries and surviving the harsh wildlands though, you’ll also need to ensure you have offspring. Ensuring your clan has fertile females is one thing, but you’ll also need to court them with a little bit of grooming. Now, picking bugs off of someone’s back isn’t exactly as romantic as taking them out for dinner, but for prehistoric man and woman I guess this is what they had to do. At least they weren’t fussy, or we wouldn’t be here right now.

Successfully remove all the ticks in a grooming session and you can get jiggy with your chosen lady-ape which in turn produces a baby, and once your clan has a child in it you can choose to move time on to the next generation should you wish to. What you’ll need to do before allowing the next generation to take over is ensure that you lock down the nodes in the evolution menu so they’ll have a leg up when their time comes and the kids’ll be alright. Now, I’m not going to lie, this game is hard. I mean the world has never exactly been the easiest of places to survive in for us, let alone for the technologically inferior early-man, so dying is an inevitability. Dying in Ancestors moves the game to the most senior hominid in your clan, be they man or woman, allowing you to keep playing as long as you have members to make use of, the game will only be over when every member of your clan is wiped out.

Since my original article it appears that the game has been updated, discovery now seems to be quicker and slightly more simplified, plus the radar in the bottom right corner seems to be a bit easier to read. Sadly now I have considerable performance issues when moving through dense jungle. Regardless of this Ancestors is still one of the most fascinating games I’ve ever played thanks to the wealth of ideas that I never expected to see in a game. What lets it down though is a control scheme that’s overly fiddly and, while I originally praised the obfuscation over what the game actually wants from you, it does grind you down considerably and quickly becomes not-fun.

Considering this is a game about discovery, it sure makes discovering things a pain in the arse. The controls are context sensitive, so if you’re near a bush or a rock or something then you’ll have a prompt to grab, which is fine, but to investigate your surroundings you need to use your instincts and apparently your instincts require you to grind to an absolute halt and then try to remember which button is for smelling, which one’s for hearing, and so on. Considering you’re surrounded by things that want to kill you, staying still for a length of time is not something that should be recommended. Ancestors wants to make you understand the struggles that early-man went through on the path to humanity and it does that by being stunning, brutal and frustrating in equal measure. If you’re no fan of survival games you won’t just suddenly like them after playing this, and survival game fans might find themselves put-out with the lack of direction here. Ancestors: The Humankind Odyssey is fascinating, but my struggles as a hominid have left me with no desire to continue monkeying around.

Initial bewilderment gives way to fascination as you understand what Ancestors is trying to do, but fiddly controls and a lack of hand-holding leads to frustration

You may also like
Ancestors: The Humankind OdysseyPanache Digital Games

Ancestors: The Humankind Odyssey gets a release date

Ancestors: The Humankind Odyssey is gaming evolution (so far)