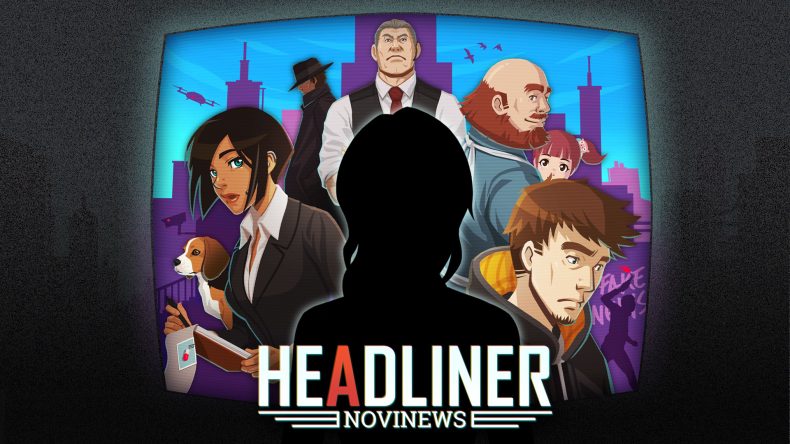 Sometimes a game feels quite timely. It echoes the world around us, and its message or the world it depicts seems to resonate more. And right now, let’s face it, the world is a pretty bleak place. One that seems riddled with divisions and vocal, aggressive clashes. From the streets of downtown Hong Kong to Trump’s America, partisan views are vehemently shared. And as the dark cloud of Brexit hangs over the UK and Europe, it seems nowhere is immune to being split, disappointed and angry.

The media often bears the brunt of such fury, for daring to espouse any such views. Fake news and media bias are apparently rife, all with their own agenda. But what if that agenda was yours? What if you controlled the news, the stories, the headlines, and thus the will of the people? Well, that would make you a Headliner, and working at the local paper, NoviNews, is your latest gig. That title is now starting to make sense.

Your job is simple: as Headliner, you choose which news stories to publish, and which go straight in the bin. Those that get printed are read by the denizens of Novistan and then treated as gospel. Therefore, you influence public opinion on a key range of issues almost entirely. You can decide how people view the police and their security, medical care, entertainment, and even world affairs and Novistan’s place in them. Most of the time you get free reign to choose your stories. However, sometimes there are limits to how many you can publish, forcing you to prioritise. But if this was simply about printing news stories, then this game would get old very quickly. Running alongside your daily decisions is your out-of-hours life in Novistan. On your way home from work you can choose to interact with various characters. They each have certain needs and opinions on the things your paper is writing about, and what you print affects their future as much as yours. Will you, for example, promote free healthcare for all to help a poor man seek mental healthcare? Does your decision change if you know it might create longer waiting times which could adversely affect other characters?

Essentially the few people you interact with each day create the personalisation of your choices. This also spills out to the scores of people who mill around and don’t interact with you too. They all represent a very visual depiction of your latest decisions. They could be protesting something or have written their latest beliefs in graffiti. And their actions crescendo into quite powerful manifestations towards the end. A lot can change in the fortnight of game time it seems, when you’re the one pulling the strings on how people think. Take the health decision I mentioned. At first, it just results in a different queue length outside the hospital you pass on the way home to your apartment. However, certain decisions over time can result in much more serious and damning outcomes.

So how does this mix of gameplay work in practice? Well, it’s broken up into two repeated daily halves. The good news is you’ll find you’re always looking forward to the next half of the cycle. You’ll agree to some headlines, then go and see whether the fruits of your calculated labour are as you intended. Then, after chatting with characters, you’ll want to sleep, then make some more headlines, to impact those you’ve spoken to. It keeps your interest instead of falling into a mire of repetition. And days don’t drag as their pace is relatively quick. A fortnight can be played in two to three hours, which is a good length to see the final outcome of your own brand of printed truth. Like most games that tell short, decision-based narratives, there’s a pull to witness different endings. However, it’s at this point where Headliner loses its way. A second run does give you other possibilities but also exposes the linearity and lack of depth that sadly exists here. You assume your choices have generated a very specific story, but a second playthrough reveals the truth as you experience similar beats and conversation trees. True, the character and population reactions are different, but not enough to surprise or engage you. It all just feels flat and familiar, which means you’ll end up just going through the motions.

Furthermore, it becomes pretty clear that there’s no good ending to be had here. At least not in the conventional sense. If you’re looking for an outcome where the whole of Novistan prospers and all your character friends get what they need you’re going to be disappointed. And the manner of that disappointment is quite blunt too. Things escalate to depressing levels, that are most likely not aligned to your intentions. And that makes for some uncomfortable conversations, leaving you with a sense of guilt. Which is quite a strong emotion for a game to elicit in a player, except it loses the impact when you realise that the guilt you’re feeling is by design as nothing you choose will satisfy everyone.

There is some replay value as you unlock an additional character to interact with after your first playthrough. There are new interactions here, but this is feeling is fleeting and they soon feel like everyone else. Each character clearly has leanings towards certain views and priorities, and should you be unclear on any character’s views on key agendas, they’ll find a way to awkwardly weave it into their conversations. This leaves you in no doubt who your decisions in the newsroom will impact and in what way. Headliner: NoviNews is an interesting take on the bleak, media-led, partisan world we live in. But while its “no good outcome” approach to your decisions is perhaps depressingly accurate to reality, it loses some punch due to the lack of depth and variety in its narrative. You’ll get much more enjoyment on a single playthrough as the impactful, poignant results of your choices play out on your fellow citizens and their surroundings. But if, as the game encourages you to, you take the plunge a second time, you’ll be a little disappointed. There’s not enough depth to warrant more time with it without it feeling like a passive experience. You’ll likely get a niggling feeling to want to skip to the end to see the results and then call it quits. And that’s quite a death knell for a game that prides itself on a replayable story.

As a single experience, Headline: NoviNews works quite well, despite having some dark outcomes. But it's lack of depth means you'll get little from playing it through a second time.