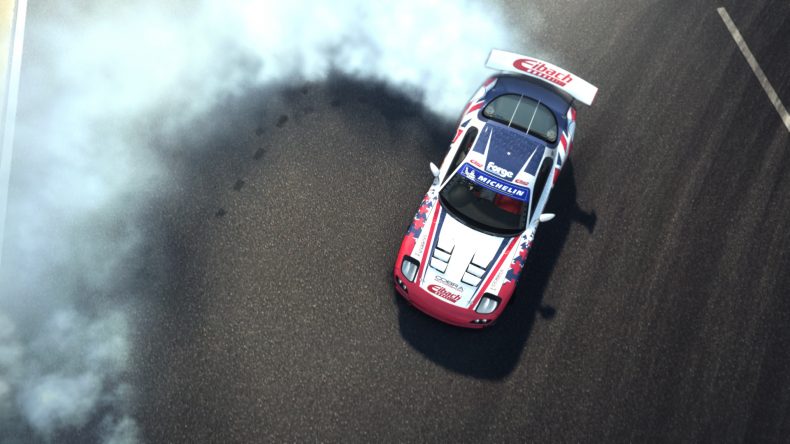 I’ve said before that Race Driver: GRID was the game that really turned me into the racing fan I am today. When Autosport released back into 2014, I sank so many hours into its career and various other modes on Xbox 360, including the DLC that was released post-launch. I even ended up buying the PC version with all the DLC later on, I enjoyed the game so much. I still play it from time to time, even now. I’ve never played it handheld before, however.

Yes, I know Feral Interactive released a mobile version of the game back in 2017 on iOS, but I simply don’t use my phone or iPad for gaming, so here I am in 2019 playing the Nintendo Switch version. It’s rather good, as it turns out. So good, I would say that it’s on par with the console versions, only really being outdone by the PC version. But then, that’s almost always the case when you have hardware powerful enough to outdo the other versions. So, GRID Autosport on Nintendo Switch is a port of the iOS port of the original game. Portception. We often look down on ports, thinking them inferior to the original game, especially when one of those ports is on mobile. But that’s a stigma to be discussed elsewhere. The thing is, there isn’t much about the Switch version that didn’t impress me. I worried that it would be almost unplayable without analogue triggers to accelerate and brake incrementally, and although it isn’t perfect with simple shoulder buttons, after a brief adjustment period, I rarely noticed the difference.

Another control method that’s exclusive to Feral Interactive’s version of the game (not just the Switch version) is gyroscopic steering. As long as you’re playing with a controller capable of gyro controls, or in handheld, you have the option of enabling the ability to turn by tilting your controller. Honestly, I’ve almost always struggled with tilt controls and that’s not much different here, but when playing docked it works really quite well. You’re not relying on the slightly-too-sensitive Switch analogue sticks, allowing you to be more precise in your steering. As long as you have steady hands, obviously. On the flipside, using these controls in handheld isn’t nearly as precise and responsive. Tilting the console seems to require either too much or too little movement for the cars to respond properly, resulting in some hilariously (or frustratingly, depending on your disposition) slidey races. And crashing, a lot of that.

The great thing is, there are so many different control schemes in this version of the game that it’s unlikely that you won’t find one that suits you. The customisation even extends to the presentation of the game itself, with three modes available depending on your mood, situation or preference. The one I used the most was Performance mode, which pares back post-processing effects like bloom and various lighting FX in favour of a smoother framerate. It sticks mostly around the 60 frames-per-second mark, though it occasionally dips a little, and the visuals are about on-par with the Xbox 360 version. If you’re not too fussed about framerate, you can prioritise graphics, bringing back those fancy visual effects at the expense of half those frames-per-second. This mode hits somewhere in the area of 30fps, but can drop a bit on rare occasions – although never to the point of being unplayable, thankfully. And this is all without the optional texture pack, which wasn’t available during the review period, but will be by the time the full game is released. The final mode aims at extending handheld play time, reducing the visuals and framerate in order to use up less battery. This is a really nice touch, especially with the Switch Lite being right around the corner. That’s enough about the technical side of things, you probably came here to find out how the game plays. Is it as good as the other console versions? Well, yes. Better actually, in many ways. In graphics mode, it looks better than it did on 360. Even in performance mode, it looks sharper and you get the added bonus of a smoother framerate. Gameplay wise, it’s essentially identical to the GRID Autosport that you may already know, even without the analogue triggers. I did have to turn on the ABS to stop my brakes locking up (something you can negate with other control methods) and it took a few races for me to get used to accelerating a little differently, but then I was happily racing around Spa, Brands Hatch and Yas Marina in Touring Cars, open-wheeled Formula cars and Endurance beasts. I was driving around the streets of Dubai and Washington in extremely tuned street machines. It felt good.

There are so many game modes on offer in GRID Autosport, including the added Drag mode and all the extra Classic championships, etc. that were added through DLC in the original release. You can choose any of these race modes in Quick Race, you can create your own Custom Cup, visit the aforementioned Extra Championships, or jump right into Career for the ultimate test.

Career is likely where you will spend most of your time in GRID Autosport, working your way up the ranks over various disciplines. You can focus on whatever you want, choosing whichever discipline you fancy for each season, or you can stick to the ones you like most. You’ll eventually want to try out each one though, so you can unlock the overall GRID championships at each level, working your way up to the highest tiers and the biggest challenges. Once you’ve chosen your current season’s discipline from Touring, Endurance, Open-Wheel, Tuner and Street, you’ll pick a team to race for based on the offers available, and jump right into the racing.

Autosport feels visceral and frenetic like an arcade game, while retaining the semi-realism for which the GRID games are known. Handling is smooth where it should be, twitchy where it needs to be, and really feels like you would imagine it does racing these extreme machines at such high speeds. It’s unpredictable, your AI opponents not always sportsmanlike as you trade paint around the streets of San Francisco, maybe even crashing out in spectacular fashion. If you do the same thing, you’ll be grateful for the series’ trademark rewind function, turning back the clock a short while to have another crack at avoiding a very crashy fate. This also helped me as I retrained my brain to get used to the new control scheme, which was nice.

The Switch has been crying out for a more realistic racer, and Feral Interactive has delivered it in spades with GRID Autosport. It sets the benchmark for racers of this type on Nintendo’s newest console, even managing to outdo the original console version despite the controller limitations. It offers customisation in terms of several control setups, and its range of performance modes is implemented extremely well. Quite simply, GRID Autosport is one of the best racers on Nintendo Switch, and hopefully will be the green light for more realistic racers to hit the console.

Despite some issues with the Switch’s controller restrictions, GRID Autosport is a fantastic port that sets the bar for the realistic racers on Nintendo’s hybrid console.