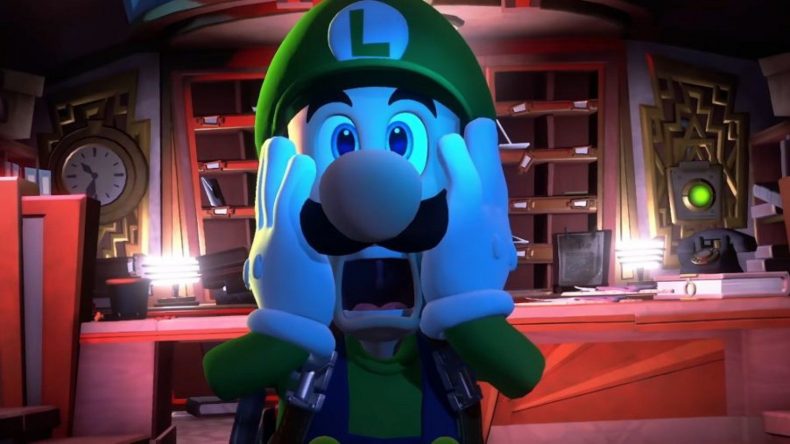 For many people, Windsor is all about the Royals. You can’t walk around a corner without seeing a cardboard mask of Harry and Megs or a garish tea towel with an ‘I HEART Windsor’ slogan printed on it. When I think of Windsor, I think about Nintendo HQ, a place where I’ve played many unreleased Ninty wonders. I’ve been there a fair few times now, and I’ve never come away disappointed. Recently I was there again to play some more of Luigi’s Mansion 3, and the main focus of the event was to play it in co-op. The E3 build I played back in June was short but sweet, and gave me a good idea of what to expect.

One of the coolest features I saw in Luigi’s Mansion 3 is your new buddy Gooigi, who is fundamentally Luigi but green and slimy. Unlike Luigi, he can get through tight spaces, and in the last preview I saw a bit of how this worked, except it was me who was controlling him. This time, one of the hosts of the event – also called Chris – sat down to show me how it worked in a bit more detail, and how Gooigi could be used. We ran through various rooms exorcising ghosts, sucking up all the goodies the room had to offer, as well as solving some cool little puzzles that worked really well. I’m still not entirely sure whether the co-op will be online or not, but it seems to work much like it did in Pokemon: Let’s Go Eevee/Pikachu, in the fact that a simple button press of one Joy Con will make him come into play. You can use two sets of controllers or just the one, but once you’re both in the game it becomes a lot more interesting. For example, one room had us clearing out watermelons in a bathroom (as you do), and one was too big for me to lift on my own. In another room, I got caught by a big plant with no way to get down. On the ground was a chainsaw-type implement, and it required Gooigi to use his flashlight to turn it on, then suck it up to use. From there, he was able to cut me down.

Lots of puzzles have you working together, but even when moving between scenarios Gooigi is vital to the game. I was trying to pick up a collectable – a purple star – but it was in a bath. Luckily, Gooigi could go through the pipes and come up through the plughole to pick it up. We battled a big red ghost together, eventually working out what we needed to do to keep it stable so we could defeat it. In the same room we both tried to find a way to open the door we had been trapped in, providing some hilarious results.

One of the best things about the preview was the boss we had to take on together, and boy, did it take a wee while to work it out. A spectacled ghoul was using a Venus fly trap to try to kill us. The space we were in was enclosed, and we were surrounded by these bulbous pumpkin-like plants. We also had access to another one of the chainsaws, but using it slows you down so we kept taking damage from the boss. Eventually, we worked out that the cannibalistic plant loved the taste of the pumpkins, and every now and again he’d attach his teeth to one. This gave us an opportunity to cut its stem with the chainsaw and do some damage. Once we cut through it, the boss came at us, but we were able to use our flashlight and ghost vacuum to suck him up and slam him into the ground. When some of the weird plants were destroyed – whether by us or the boss – they revealed hearts, so there was always a way for us to regain some health. It was a challenge, but not overtly hard. It was tough at times, but also made us laugh, and finding a way to defeat him and actually doing so was definitely the highlight of the event.

Luigi’s Mansion 3 is showing a lot of promising signs in both the single-player experience and the co-op. Not only is each room packed with collectables and things to do, they give you plenty of surprises and hidden areas for you to find together. They’re dense – filled with so much to explore – and are all completely different. It looks amazing, and the options for you to explore the mansion are plentiful. You can use your vacuum in a lot of different ways, and some puzzles can only be solved when Gooigi comes out to play. Co-op is certainly the best way to play, and I can’t wait until the game is released so I can find out just what the hell is going on in the creepy and cute haunted house. Roll on release day!

Video games are cool. Don't let anybody tell you any different.
MORE LIKE THIS
Luigi's Mansion 3nintendo

Podcast #364: Support the Sweetcorn
Be the first to comment!
Leave a reply »