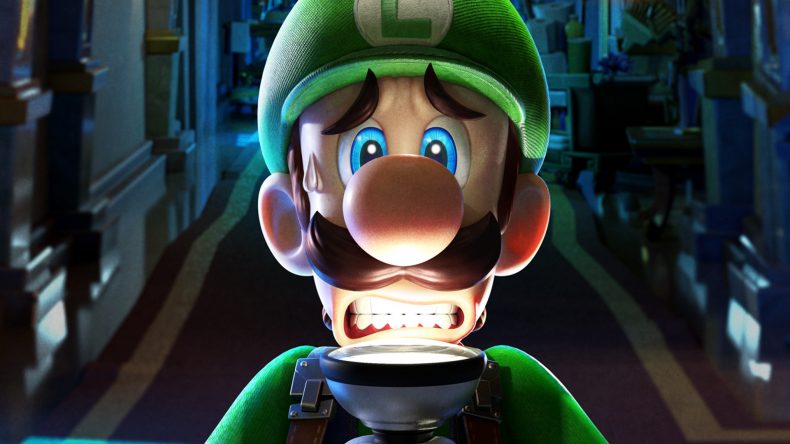 It’s remarkable how some games make you think, isn’t it? For example, before playing Luigi’s Mansion 3 I had never considered these questions: have I ever seen the Mushroom Kingdom gang in a bus before now? Is Princess Peach’s dress starched or does it have ribs to keep it like that? Why does Mario get preferential treatment while the older brother Luigi has to carry his own suitcase and walk behind the Toads carrying everyone else’s luggage? Why would Princess Peach, having been kidnapped a frankly absurd number of times, agree to visit a random hotel based on an invite from someone nobody knows?

I tell you this because when I say that Luigi’s Mansion 3 has that typical “Nintendo Charm (™)”, it’s so abundant, overflowing with said Charm (™) that it made me notice all these things and then some. It feels almost Mario + Rabbids Kingdom Battle-like in how whimsical and off-brand it is, but maybe that’s because it stars Luigi and Professor E.Gadd so feels like a bootleg game, yet its production values are sky-high.

Remarkably, Luigi has more personality than Mario. Perhaps, again, this is because we see less of him in a starring role, so his delightfully scaredy cat antics are a joy to see. His reactions are priceless, and rather than jump scares being actually frightening, they are cute and you feel for poor Green Mario. He scrambles across the ground when a ghost pops out of a bin, and his mouth is aghast when a removed sheet reveals rats that give chase. A “mainline Mario game” this may not be, but goodness me this is a pristine, polished game. The crux of this particular Mansion’s tale is that King Boo has escaped thanks to a fan (of ghosts – who knew?) that’s released him. Boo’s revenge (which would be a great game title in itself and you can have that one for free, Nintendo) is to trap Mario, Peach and, well, everyone really, in paintings forever. It seems a bit harsh, so to escape, Luigi runs from King Boo before launching himself down the waste pipe eventually rescuing E.Gadd from a painting, visiting his pop-up lab, and starting the adventure proper.

And what an adventure it is. Across an enormous hotel that for some reason brought to mind a cross between Guest House Paradiso and Scooby Doo, you’ve got to capture the ghosts and save the day. This is Luigi’s Mansion, of course – or Luigi’s Hotel, which I’ll confess is nowhere near as catchy, so perhaps these plucky Nintendo-kids are onto something after all.

If you’ve played Luigi’s Mansion before, you’ll know you have a vacuum that both sucks and blows, while you also have a torch to startle ghosts before you can vanquish them. Early on you’ll gain two other ways to tackle the spirits from the other side, but this is actually a problem because you know everything you’re going to know well before the halfway point. The level design is pretty special, though, and new ways of having you use your toolset do constantly surprise and delight. The characters are alive, but so is the hotel. Every object is interactive: mirrors reveal secrets, spiders crawl above you off-screen revealing an area you hadn’t previously realised existed. Cupboards become treasure troves, cracks in the wall explode under duress to reveal hidden caches of gold, all to let you buy items that aid your progression. Every floor of the hotel is themed, so the visuals are constantly arresting and it runs beautifully in handheld or docked mode, too.

Combat is simple, really. Ghosts require different methods to catch them. Initially you’ll be stunning them with your torch then chasing them down with your vac, battering them from side to side in a comically marvelous manner. Boss ghosts require more thought and strategy, but it’s always satisfying when the lightbulb flickers on and you realise what it takes to put them into your personal pouch for safekeeping. Luigi may be a scaredy-cat but he’s better than any Ghostbusters out there.

It’s the boss battles that are the real draw, too. While some are excruciatingly frustrating (mechanic/water boss, I’m looking at you), for the most part they are superbly executed. The one area Luigi’s Mansion 3 slightly falters is in how it is paced. Mostly you will be getting buttons for the elevator that lets you explore a new floor and thus a new boss. Sometimes even once you have defeated a boss ghost and grabbed the new lift button, you’ll drop it, or have it pilfered. The first time it’s cute, the second time added over forty minutes for me across floors I’d already explored, in order to retrieve something I’d already won from a boss. It felt a little cheeky. Aside ghost-busting, the puzzle solving is rarely taxing but it’s always fun. Popping Gooigi out and playing co-op (which works well, but always leaves the Luigi-player in total control of where you explore) or controlling him yourself is how you access otherwise impossible ledges, treasures, or puzzle solutions. He’s equally cute, and will vibrate the controller when near Boos, who aren’t essential to capture, but offer another distraction to aid your curiosity throughout the mansion which, by the way, again, is actually a hotel.

In truth, even with the fun, objective-based 8-player multiplayer mode, Luigi’s Mansion 3 feels best played in short chunks. It’s not a fast paced game, and even when multiple ghosts are attacking at once, it feels merely like Luigi is performing some gentle exercise. But that’s also the point: this isn’t a title to charge through and blitz in a day or two, it’s ideal for the console it’s been made for. Play a floor at a time, thoroughly exploring every nook and cranny and you’ll find it a peaceful, wonderful romp. Thrash out 2-3 hour sessions and the passive, almost plodding nature of Luigi’s cowardly exploration will grate a little. But Luigi’s no coward; not really: he’s every part the hero you’d hope he’d be.

Luigi’s Mansion 3 is delightful. It’s an adventure that begs to be unfurled. It’s polished, sounds great, has mechanics that belie their simplicity with continuous surprise, and is fun for everyone. It’s not scary and it’s not meant to be. It isn’t the best game you’ll ever play, but it’s a fun, cheery romp that is just a lovely time, and it really is thoroughly enjoyable.

Fun for everyone, Luigi’s Mansion 3 delights with its themed bosses and exploration. It’s a slow burn though, and not everyone will appreciate it’s pacing.