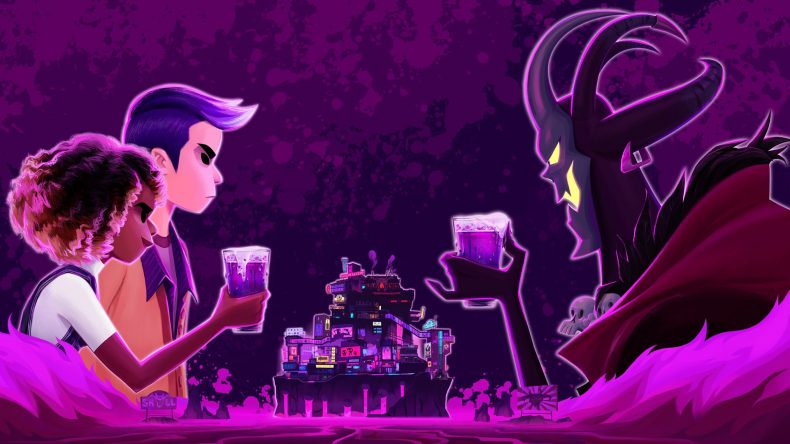 “There ain’t no party like an S Club party” was a lesson we learned as the 20th Century drew to a close. And it seems those seven spirited British pop stars were bang on with their message. Especially, it seems, when the S stands for Satan. He’s the ruler of Hell, and boy does he know how to have a good time. He throws an alcohol-filled house party every single night, and the queues to get in are very long. It’s perhaps best not to ask people in Afterparty how long they’ve been waiting.

Playable characters Milo and Lola find themselves deceased, and two of the newest arrivals to the Underworld. Like most newcomers, they’re less than happy with their new surroundings. Thankfully, there is a way to return home, they just have to beat Satan at a drinking contest. And given the amount of practice he has, you can imagine how frequently that happens. Unperturbed, you (as Milo and Lola) embark on a quest to grant yourself an audience with Lucifer and hopefully take your one chance at freedom. And if you can avoid vomiting on the furniture in front of the cool demons, all the better. The setting, narrative, and characters are a far cry from developer Night School Studio’s last offering, Oxenfree. Whilst it retains the key gameplay elements of exploration and conversational choices, Afterparty feels like a very different beast. Alcohol plays a central role in things, changing up what options you have during a chat. Some drinks give you the Dutch courage to say things you wouldn’t normally. Others get you so drunk you adopt different personas with your answers. Thanks to the various cocktails on offer you could assume the role of a pirate, mobster or a rich asshole. Most of these options are added for a bit of fun, boosting your exchanges with a large helping of witty humour.

And Afterparty is funny. It serves as the perfect juxtaposition to the harrowing setting of Hell. The writing here is very funny, peppered with clever, witty one-liners. Unlike Oxenfree, where confidence or composure from the protagonists could feel at odds with the unsettling scenarios the characters were experiencing, in Afterparty it feels right at home. The demons or other human inhabitants of Hell have had a long time to hone their speechcraft in-between years of torture. The speed of their witty returns exudes confidence that feels natural to their surroundings. There’s a fair amount of swearing, too, but it’s never jarring. More often than not it reinforces the messages and punchlines. And if swearing was ever going to have a home, the Underworld feels like the best fit. But there’s more going on here than just binge-drinking and crass one-liners. Milo and Lola’s relationship is the narrative centre which everything else flows around. They’re lifelong friends who’ve been together since they were young. Now they’ve graduated from college, their differing personalities mean their futures lie in different directions. Neither wants to hurt the other, but they also want to do what’s right for themselves. It’s a turning point in their lives that is interesting to witness. So much so, it often grabs your attention more than the world of Hell surrounding them. The pair have believable personalities, and what’s more, a convincing friendship, backed up by their well-written dialogue. Their exchanges are credible and heartfelt, and that draws you to them even more.

Milo and Lola are also given their own personal demon when they arrive in Hell. This appears at various points throughout the story to try and unnerve the pair or drive a wedge between them. It’s a humorous way of delving into their backstories and fleshing them out as individuals. But at the same time, you also get a feel for their devotion and support for one another. The blunt interactions between them and their personal demon will often generate a wry smile, in-keeping with the dialogue of the main adventure.

But when you shift focus away from Milo and Lola and pay attention to Hell itself, you realise all is not well. Hades has been going downhill, if such a concept were possible. Satan’s booze-filled soirees every night are the talk of the town, and not just from those who are eager to be on the guest list. Apparently Hell used to be more fun, and things need to change. It’s a simple idea but creates themes bigger than our heroes. People care about where they are and what’s happening, fleshing out these NPCs beyond mindless AI characters. It also takes the focus away from being completely on Milo and Lola. Rather than them being in a place that just tortures them for their past indiscretions, it’s a living and breathable place with its own issues and problems. And the design of Hell really does make it feel alive. There are hundreds of demons and humans wandering about, enjoying their own evening to the fullest. They’ll often interact with each other, maybe giving a wave as they pass a familiar face. The majority of your movement is from left to right in 2D environments, However, clever use of filled foregrounds and backgrounds give a feeling of depth to the locations. Mostly this is a good thing, but it does make you wish you could fully explore everywhere. There’s plenty of interesting buildings or locations which are agonisingly out of reach. Instead, you must stick to the paths through the streets, which is a shame.

There are framerate issues as locations are loading in, or during travel to different parts of Hell. Most of these are planned to be fixed with a day one patch, meaning they’ll likely not trouble you. But the drops I experienced were very noticeable and numerous. The saving grace was as they were mostly during loading screens, the drops rarely affected gameplay. If they did, it just caused some minor animation slowdown or conversation stuttering before catching back up again.

Like Oxenfree, the decisions you make affect how Afterparty plays out. Don’t expect wholly different experiences on a second playthrough, but there are multiple ways to achieve certain objectives. So a second run through Afterparty – which clocks in at about five hours in length – is worth it to see most of the content. The biggest decisions come at the end, where your choices can have a very different impact on our characters and Hell itself. I very much enjoyed the endings, both delivered with wit and charm.

Afterparty feels both familiar and completely different from Oxenfree. In both titles, your decisions affect what happens, and character development is key. But Afterparty swaps the goosebumps, horror, and mystery for humour, brazen language, and a cocky confidence that you can’t help but enjoy. Don’t be fooled by the brash setting, Afterparty is something special thanks to the quality of its writing, solid world-building and likable characters. Night School Studios has created a world I could easily spend more time in. I’d happily interact with more demons, and discover seedy new watering holes if it had let me. Being stuck here for eternity wouldn’t be half bad at all.

Framerate issues
You'll want to explore more than you can

A funny, likeable adventure with lashings of alcohol. There's also enough content in Afterparty to push you through a second time around.