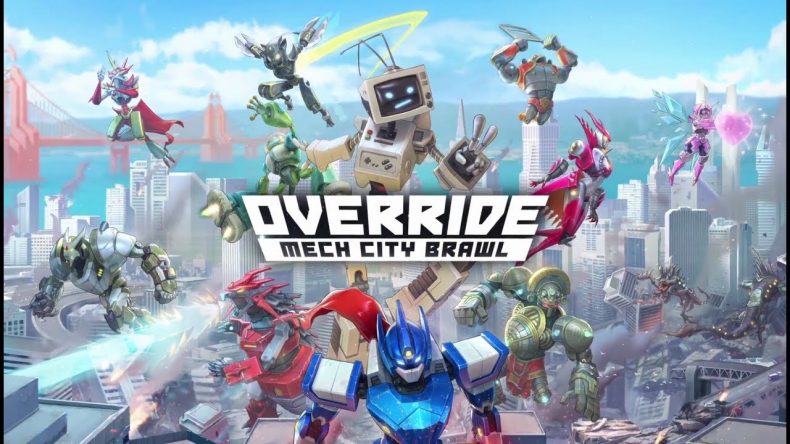 It’s not particularly uncommon throughout video game history to see giant robots battling amongst the skyscrapers of a bustling metropolis. The power fantasy of jumping into a metal goliath and stomping through the city to take down a gargantuan foe has been the dream of Mecha fans for years. From dedicated mech combat series Armored Core to modern day FPS Titanfall, there will always be a place in this writers’ heart for a massive robot or two.

Override Mech City Brawl looks to bring more of a melee focus to its mech fighting game, with deliberately slower combat. Battles take place in mostly flat 3d arenas, with (generally) two mechs entering and one mech leaving. A quick and easy tutorial shows you how to maneuver, attack and block your way to success, alongide the use of your 4 special moves and ultimate attack. The pace means that blocking and parrying are incredibly important. Regular attacks can be blocked, but their charged counterparts break a mech’s shield. These long winded attacks leave you open to a parry, and battles quickly become mind games. Trying to stay one step ahead of your opponent, and counter their combat style is as enjoyable here as ever.

Each of the 16 characters have fairly similar basic attacks, but their variety of special attacks can be game changing. These range from simple ranged attacks, to dash attacks and even teleportation. Once your health reaches a critical level, you also get access to your ultimate attack. These are very unique, with my personal favourite being the Vintage robot plugging a mock NES cart into itself and turning into a retro spaceship to blast its foes. Alongside selecting a character, you also have a huge amount of customisation options in terms of cosmetics. Each mech has a selection of skins and hats, ranging from different colour schemes to full outfits swaps, meaning you can transform your mech into a much cooler or even goofier fighting machine. My personal choices saw me battling as a pizza delivery robot, a huge fishing mech, and a gladiator with a Santa Claus hat! Cosmetics are unlocked with either currency slowly gathered for competing in battles, or randomly unlocked after each match won in any of the game’s modes.

If you are playing with other people locally, you can choose between 1 on 1 battles, team battles, or the all out mayhem of a free for all brawl. Unfortunately with any match featuring more than 1 other mech, I found the game had an almost unplayable amount of significant drops in framerate. This isn’t the only framerate issue I had either, as one particular Ultimate Attack actually pauses throughout its entire animation. Override also features a fairly deep single player campaign. Alien creatures have invaded Earth, and the military have drafted in the huge mechs that usually compete in the Robot Fighting League. Each mech has a different pilot which the story is shaped around, but upon joining the military they all must complete side missions with different rewards until the next main story level unlocks. Missions see waves of extra-terrestrial monstrosities spawning, which need all the punching and kicking you’d expect. Fighting a lot of weaker enemies at once is a welcome change of pace from the standard mech vs mech battles of other modes.

As you proceed through the campaign, you are rewarded with research points you can spend to upgrade individual components of your robot. Health, speed, power, and special meters can all be significantly boosted to help you dispatch of the alien menace. Alongside these upgrades, you also unlock different breakable weapons that spawn into the arena on each stage. These small changes ensure that the couple of hours you’ll spend ridding the world of monsters never gets boring. Although easy in terms of difficulty (and with no adjustable difficulty level) the campaign really helped me get acquainted with my selected mech, and I was ready to take on other players in the ranked online battles. Regrettably at the time I was reviewing the game (a couple of days after the Switch launch date) I was unable to find a single match online.
At its core, Override Mech City Brawl is a very fun fighting game. Playing against an opponent of an equal skill level and correctly predicting their next move feels amazing. However with a considerable amount of framerate issues rendering certain modes and mechs unplayable, and without an online presence – it becomes very hard to recommend it.