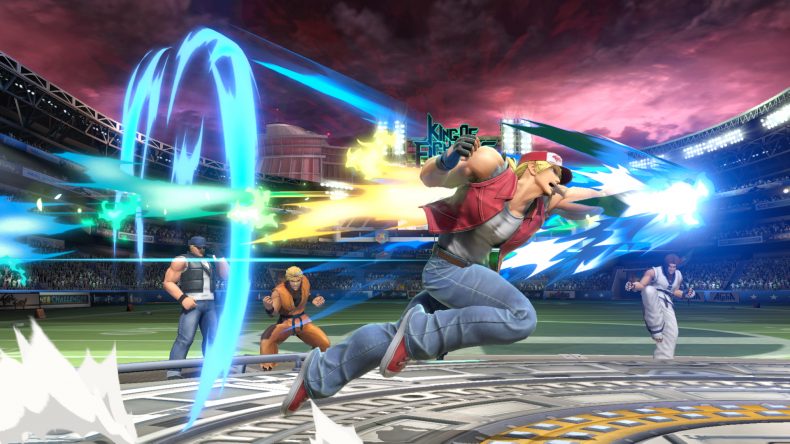 Terry Bogard from the FATAL FURY series is joining Super Smash Bros. Ultimate. The King of Fighters will be a playable fighter from today.

In a new video Masahiro Sakurai, the director of Super Smash Bros. Ultimate showcased him action, and unveiled the King of Fighters Stadium stage and 50 music tracks from an assortment of SNK titles.

All of this new content will be available for players who own the Super Smash Bros. Ultimate Fighters Pass or purchase Challenger Pack 4 separately.

Terry Bogard has appeared in more than 50 games spanning the past three decades. He made his first appearance in 1991 in FATAL FURY: KING OF FIGHTERS. Since then he has grown into a mainstay in the fighting game community and a mascot for SNK. In a fitting tribute to his roots, Terry Bogard’s move set will bridge the classical arcade fighting gameplay of the FATAL FURY series with the signature playstyle of Super Smash Bros. Ultimate.

By purchasing the Fighters Pass, Super Smash Bros. Ultimate players will get access to five Challenger Packs. Each pack includes a new playable fighter, a new stage and music tracks. Joker, Hero and Banjo & Kazooie are all available now, with Terry Bogard joining today. One additional character, who has yet to be revealed, is also included in the Fighters Pass, and will be available for download at a later date. For more information about Super Smash Bros. Ultimate, visit the site here.

Likes to shoot stuff and wear pretty shoes. Is a BEAST at Titanfall.
MORE LIKE THIS
Fatal FuryMasahiro SakuraiSNKsuper smash bros. ultimate