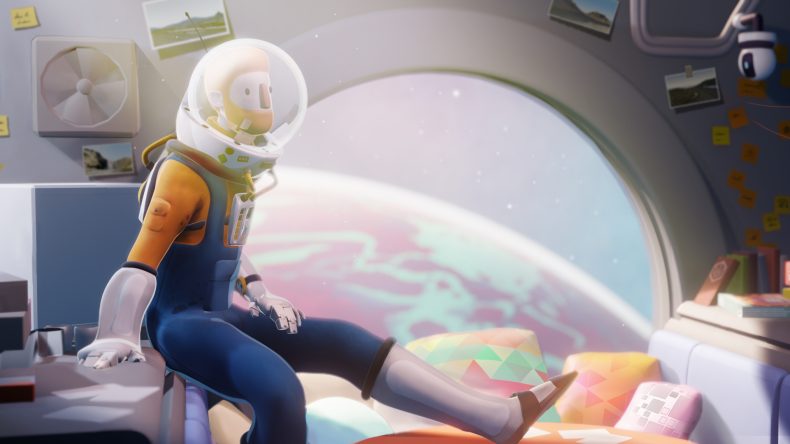 We’ve done something a little different with this preview, and you’re getting two opinions for the price of one. Upcoming puzzle game Filament has been road-tested by both myself and Gary to gauge different perspectives. With Gary being less enthusiastic about puzzle titles, and me a self-confessed puzzle geek, expect very different opinions that hopefully round up to a solid overview of what you can expect when this game launches later this year. Right off the bat, I’m going to say that Filament is a bastard hard puzzle game. One puzzle took three of the GIAG team to solve it, over the course of nearly 24 hours of back-and-forth image sharing in Slack (the only other puzzle game to ever do this was The Witness). Chris Hyde ultimately deserves the credit for finding that winning solution because I certainly would have never figured it out alone. I’m not saying this to run the game down; quite the opposite, as it shows that Beard Envy (fantastic name, by the way) has put an awful lot of thought and care into Filament’s puzzle design.

The game begins as you board a seemingly abandoned ship, The Alabaster, in orbit around a mysterious planet. You soon discover that it’s not entirely abandoned, but not in that “in space, nobody will hear you scream” kinda way, Filament is no horror game. Instead, the ship’s navigator, Juniper, speaks to you over The Alabaster’s ship-wide communicator, as she has become trapped in the cockpit. You are, it seems, the Obi-Wan Kenobi to her Princess Leia: her only hope.

You will help her by powering up various terminals throughout the ship, which neatly introduces the (soon to be fiendish) puzzles I mentioned earlier. This is where things get a bit complicated because explaining how it works isn’t easy. Each puzzle follows the same rules, in that you have to power little pillars within each puzzle room. You do this by sending in a little robot (I think that’s it anyway, the game didn’t explain anything) that drags around a cable that you’ll wrap around each pillar, powering them as you go. It’s not always that simple, however, as you will have to power them in a specific order and you can’t cross over the cable, requiring some real out-of-the-box thinking at times. Hence the puzzle that needed three of us (well, two, I was just the one trying out the suggested solutions) to complete. Outside of the puzzles, you’re free to roam The Alabaster as you please. You will find key cards that belonged to the rest of the crew, which you can take to the main terminal and, once you’ve input the rather unnecessary puzzle code, you can read their log entries and discover just what was going on before The Alabaster became a one-woman vessel.

The whole game is played from a top-down perspective, with a very simple art style that feels perfectly suited. It reminded me of Planet Alpha, in that respect. It’s also surprisingly simple to play, too. Using an Xbox controller, I rarely needed to press a button outside of A to select a terminal or pick up an item. While trying to solve puzzles, the left trigger would zoom out to reveal the whole room and give me an idea of how to proceed, whereas the right trigger would rewind progress, when I inevitably cocked it all up and had to start again.

Filament is genuinely a joy to play, thanks to how simple its controls are and just the relaxing pace at which it goes. When you do get stuck, there are usually other terminals open to you, so you can break off and try out another avenue of progression. Unfortunately, if you’re like me, it’s entirely possible that you’ll come across a dead-end at every terminal you visit. This is because it’s a game that feels designed to appeal only to hardcore puzzle fans, in its current, unfinished form. It’s a real shame because I was really intrigued by the story, but it only progresses through the completion of terminals, when Juniper’s voice echoes through the abandoned ship with a little more information for you to digest. Someone like me would never see the story through to its conclusion if the game were to remain so staunchly cruel in its puzzle design. I’m not saying that the game should be tailored to suit everyone, or dumbed down for idiots like me, I’m just forewarning you, dear reader, that if you aren’t into puzzle games then Filament is unlikely to appeal. I must say that I have still enjoyed my time exploring The Alabaster, discovering a little bit of its backstory and listening to Juniper’s rather soothing voice over the ship’s communicator. I loved the feeling I got upon finally finding the solution to a particularly tough puzzle, especially when it led to the completion of a terminal. It’s just a shame that I exhausted all avenues, becoming stuck at every one, leaving me no way to move forward. If that happens to me within the first few hours of a game like this, then I have no hope of seeing the full game through to the end. Not unless a few concessions are made in the final build. Puzzle game fans, however, will undoubtedly fall in love with Filament.

That seems like my perfect cue. As a puzzle fan, when Gary shared the one he was stuck on with us, I just couldn’t let it go; I didn’t want to be beat. Thankfully that approach was one that would stand me in good stead throughout my playthrough of Filament. The biggest challenge is it’s actually quite a hard game to explain. It’s essentially just looping a power cable around a set of nodes to power them, and once they’re all done, you exit the level. But there are extra nuances like placed cables creating a barrier that you can’t cross, and you also need a route to the exit to viably escape at the end. And that’s before the game throws other rules at you like nodes you have to power in order or sections that your cable cannot touch.

Puzzles are grouped into fives and completing them all powers anchors – essentially power units on the Alabaster that then progress the story and unlock certain collectibles. After each anchor or two, a new puzzle idea is introduced to keep things fresh. So whilst the key puzzle-solving element is the same, the obstacles to overcome in each puzzle set feel new and varied. This helped maintain my interest over the course of the preview build. I will admit that the puzzles can be difficult at times, and there are steep learning curves as you progress through the sets to the most fiendish versions of each puzzle type. But, what kept me going as I ploughed through every single one of them was an appreciation for how clever these puzzles are. Most, like the one that stumped us all for 24 hours, are incredibly nuanced, despite appearing deceptively simple. The specific placement of the nodes make certain angles unviable to wind around that can make what appears to be the right solution totally incorrect. Seemingly harmless material attached to the nodes is designed to force you to go about things in a certain way or again tease another wrong solution.

Filament goes even further by dropping clues to how to solve puzzles, once you figure out the rules. If you pay careful attention to which nodes it demands are powered before others, you can deduce certain truths around which nodes you must power first. Alternatively, if a node has material around it all bar one side, you know that bare side must be where the cable goes, and that informs your options for which direction or node it must come from.

If all that sounds confusing or too intense, it’s because there’s no getting away from the truth here: Filament will only appeal to puzzle fans. Those who aren’t really puzzle buffs but are curious will likely drop off this very quickly, while those who stick with it and enjoy a good head-scratch will find plenty to love. A few glitches like your cable seeming to snap at times or text being delayed in your conversations with Juniper were noticeable but will likely be fixed before the game is properly released. All in all, I found this a very enjoyable, curiously addictive little puzzler that I can’t wait to see more of when the game is fully released.

Filament review
Be the first to comment!
Leave a reply »