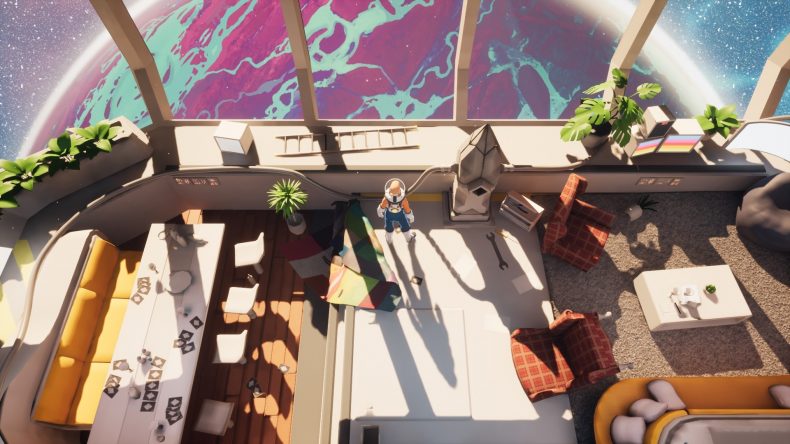 Puzzle titles have to strike a careful balance to resonate. The very best ones have to be a precise blend of being simple enough for people to get stuck in, but also provide enough of a challenge to give your brain a workout. They introduce new ideas throughout, and a well-executed learning curve means you tackle progressively tougher puzzles without feeling completely lost. There’s also a purpose to the puzzles, or some kind of back-story to proceedings, that keeps your interest. Whether it’s Portal, The Talos Principle or The Witness, they all have these traits and therefore keep you hooked from beginning to end. Filament, the latest puzzle offering from Beard Envy does most of this right, but loses its way a little to prevent it from being one of the true puzzle greats.

Filament takes place on a spaceship called the Alabaster. You find yourself on board looking to help out the only crew member you discover. Juniper, the ship’s pilot is stuck on the bridge and needs your help to power up the Alabaster to access it. By powering up the various “anchors” around the ship, you’ll be able to locate Juniper and maybe figure out what has happened to the rest of the crew and what left the Alabaster in its abandoned state. Powering up the anchors is where Filament’s puzzles come in. To successfully provide an anchor with power, you need to solve a series of up to five puzzles. In all of them, you control a little robot with an expendable power cord coming from its back. You need to weave this power cord around nodes, to power them all. This will then open the exit, and you need to leave the room with the robot. It starts incredibly simply, with just a couple of nodes and a simple route to the exit. However, as you progress, the complexity ramps up significantly.

Every few anchors or so, new considerations are introduced that add layers of variety and challenge to the puzzles. There might be nodes that need to be powered in a specific order for example, or different coloured nodes requiring different coloured cables to power up. Some nodes may even need to be powered multiple times, and some will need to be avoided entirely. These nuances, in combination with the placement of nodes in a given puzzle, can make the required route around the nodes very specific. This can lead to very exact solutions that by their nature can be extremely difficult to deduce. Filament isn’t scared to stump you, even to the point of frustration. It’s something everyone should be mindful of going in: Filament is a hard puzzler at times.

It doesn’t help that the learning curve doesn’t feel like a curve at all. Instead it can often feel more like an electrocardiogram line, depending on which puzzles you try and tackle. The sandbox nature of exploring the Alabaster means you can tackle groups of anchors in any order, which will introduce different puzzle constraints. Some of these are simple, and even their toughest puzzles feel surmountable. Whereas others can stop you in your tracks, preventing you from progressing in that anchor group. Some of this could be down to personal preference and an individual’s ability to spot solutions in different types of Filament’s puzzles. It’s difficult to know if I simply found certain challenges easier to compute in my head. However, there are other factors at play here that affect the consistency and pace of the challenges. For example, some puzzles have multiple solutions, maybe some intended, others less so. This naturally makes them easier, as you only have to find a solution that works. Other puzzles clearly have one intended solution, and so having to find that specifically, definitely ramps up the difficulty. Also, puzzles don’t always follow the tried and tested mantra of becoming harder as you progress through them. All this makes Filament feel oddly-paced at times, and you don’t necessarily feel like you’re growing your experience with the game.

All that aside, it would be remiss of me not to mention the quality of the puzzle design in places. It’s clear the developers wanted to push your logical thinking and spatial awareness, and they often succeed in giving you real head-scratchers. When you study the puzzles you realise how deliberate these challenges are due to the slickness of their design. Node placement is incredibly intentional, as are various obstacles in conjunction with the specific puzzle variant on display. These considerations often hint at false solutions, answers that almost work, but don’t quite land due to a misaligned angle or lack of space to weave your robot around. There is a real awareness of how people will go about solving the puzzles, and they’ve cleverly left a few false breadcrumb trails to antagonise puzzle enthusiasts. The variety of different puzzle types and winning conditions does help to keep things fresh. Despite all the puzzles taking place in quadrilateral rooms, and every one of them is about powering nodes with a cable, they don’t ever become dull. The groups of anchors give you just enough of a particular puzzle theme to explore its nuance without it becoming stale. And then, you move onto the next set of anchors and a new rules set is introduced to rewire your thinking. Being able to dip in and out of anchors should you become stuck also means you can go and try your hand at some different puzzles if a particular node challenge has you stumped.

Aside from the actual puzzles, there’s plenty of intrigue surrounding what happened on the Alabaster before you arrived. Juniper speaks to you in between the successful completion of anchors to provide tidbits of information about past goings-on. Also as you explore the Alabaster, you might discover a point of interest that will spark another monologue from her as she recounts past tales of her and her crew before things went awry. Completing anchors will also reward you with certain node codes to input to a computer which reveal communications between the team before they disappeared. Like computer logs in the Fallout series, they provide a glimpse into the backstory without overtly telling it, requiring you to piece it together. There are also more subtle puzzles to solve revealing more about the scenario, should you want to invest more time in understanding the lore further. It’s rather well done, and in keeping with the hands-off approach of its puzzling too.

Filament’s core puzzle idea is rather unique, and one that is explored in multiple different ways thanks to the variety of rules it introduces throughout. It’s engaging and curious but demands a lot of you at times, which can frustrate. But it is clever, deliberately so, and the puzzle design itself is devilishly intelligent. The backstory of the Alabaster is also quite intriguing as you piece together more of what went on before you arrived. If you can stomach the repetitive, frustrating failure that a few of its puzzles will cause and are prepared to weather the storm for the inevitable dopamine hit when you figure it out, then you could be in for a treat. It’s not perfect, nor is it one for the faint-hearted, but it’s ideal for those looking for a puzzle challenge.

Filament provides a brand-new puzzle challenge that is well-designed. Just be prepared for a steep challenge at times.