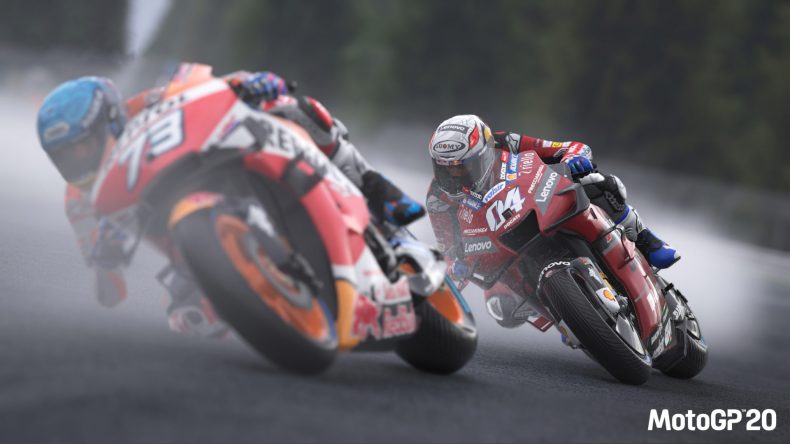 The F1 games have been showing how official racing games should be done for the last few years, so it should come as no surprise that Milestone’s MotoGP series has begun to follow Codemasters’ lead. Of course, the two-wheeled gameplay couldn’t be more different, but the career features and on-track systems of MotoGP 20 have clearly learned something from the official Formula One games.

The main area it has improved in is how career mode works. Practice sessions offer developmental opportunities, allowing you to take your bike out and learn each track beforehand, while rewarding you with research points depending on your performance. Again, like the F1 series, this lets you develop upgrades that will be added to your machine as the season progresses.

Practice also allows you to discover the right setup for your bike. This is part of the MotoGP series that I have loved since Milestone’s Valentino Rossi: The Game back in 2016, as it offers a guided setup for those of us that love Motorsport, but don’t necessarily know the ins and outs of the machinery. Choosing from a list of options, your engineer will ask you to describe your issue and will recommend a setup change to suit. It’s not a perfect system, but it really does help. More help is needed in the rest of career mode, though. You’re tasked with managing your engineers and contract, but the game doesn’t really tell you how. It’s reasonably straightforward once you take a good look, but when you’re first getting into the game and trying to get into the research and development side of things, it can be a fair bit to work out. It just needs to give players a little more information; perhaps a few tips when you first open the relevant menus, just to improve quality of life.

But it’s on the track where you’ll be spending almost all your time in MotoGP 20 and you’ll be happy to learn that the handling is the best I’ve experienced in any two-wheeled Motorsport game. Whether you’re the hardcore type that uses the pro model, someone taking a more relaxed approach with assisted, or sticking with normal handling, it feels smooth and precise. It eventually becomes second nature to shift your weight before the corner, leaning into the turn for the quickest line — though that’s not to say you’ll always make it. That has something to do with the new tyre wear system, though it could also be down to just making a complete hash of it. We’ve all been there. It’s part of any Motorsport, not just MotoGP.

Managing your tyres and fuel is vital to earning those all important podium positions and wins, so making sure you brake at the right time and turn smoothly into corners is essential. The same goes for accelerating out of corners, trying to avoid putting too much power through the back wheel and wearing down the rubber too quickly. Unlike previous games, tyre wear doesn’t just affect the tyres as a whole, in MotoGP 20 it’s asymmetrical, affecting the sides and middle of each tyre differently. Demanding left turns will wear down the left side, for example, reducing traction out of those corners over time. This takes some getting used to, I found myself overcooking it out of bends a lot of the time, while learning new circuits. The back end would wobble dangerously and sometimes I’d simply slide off the track or even off the bike. This is where the rewind function comes in handy, correcting your mistakes and allowing you a second chance at that corner. The AI can lead to rewind usage too, as it likes to be a little too aggressive in defending lines or trying to overtake. MotoGP 20’s “Neural AI 2.0” is designed to give each rider their own personality and riding style, which it does superbly most of the time, but even during practice sessions it sometimes veered wildly across my racing line as I was racing by on a hot lap, leading to some last-ditch evasion or spectacular crashes: hence the rewind function being such a life saver. Unless you’re the type to switch it off of course, preferring ultra-realism in your racing sims. Just make sure you have good reflexes, otherwise I see a few DNFs in your future.

To help avoid accidents and to learn how to ride circuits, you no longer need to have one of those obnoxious racing lines covering the track ahead. Instead, MotoGP 20 simply uses guiding markers track-side, with blue ones letting you know roughly where the apexes are and red ones acting as braking distance guides. I usually don’t use racing lines, but I found this method incredibly useful and much less invasive, to the point that I kept using them and will continue to do so. Again, if you prefer to go full simulation, simply turn off this feature.

However you like to play your two-wheeled racers, MotoGP 20 really does have it all. You can even adjust your assists on-the-fly using the D-pad, again like managing the Multi-Function Display in the F1 games, even helping to manage fuel usage by turning the power mode up/down as needed. This can be used on all bikes, even the historic ones, unless you say otherwise. There is a handy “real” setting for purists, which limits this function to the bikes that actually have it in real life.

Historic bikes make their return this year, complete with improved historical challenges that provide a more arcade-like experience. With classic bikes and riders from years past, these randomly-generated challenges are shorter and focus entirely on short, fun races. They aren’t as accessible however, with even the designated “easy” races adopting slightly higher AI difficulty and you have to get yourself onto the podium in order to earn any kind of reward. These rewards allow you to buy new riders and bikes, and the higher the chosen difficulty, the greater your rewards will be.

MotoGP 20 is easily the best two-wheeled racer out there, with modes and settings to suit all players and a career mode that lets you rise through the ranks from Moto 3 or jump straight into the saddle of a MotoGP beast, with the eventual goal to be the MotoGP champion. However you choose to play, the handling model is incredibly smooth and the AI offers an impressive (if sometimes overly aggressive) challenge as you fight for position. Whether you’re a fan of the MotoGP series or just a fan of Motorsport in general, MotoGP 20 could rival Codemasters’ F1 series and is certainly one of the better circuit racers on the market, two-wheeled or otherwise.

With its incredibly satisfying handling model and excellent career mode, MotoGP 20 offers one of the best circuit racing experiences on the market.