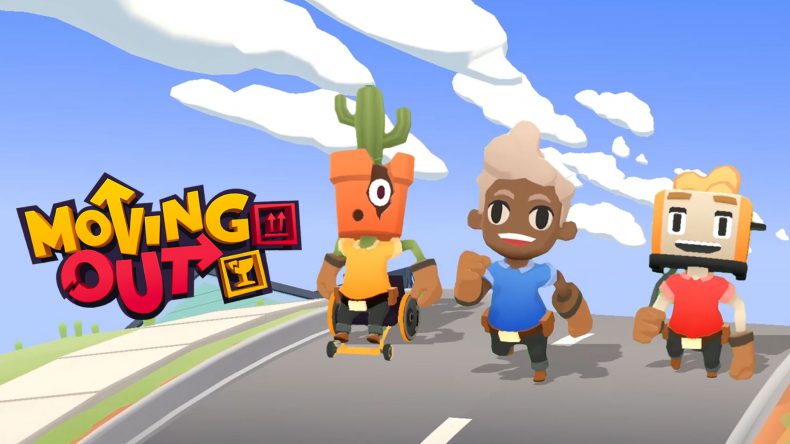 From the moment Team17 revealed Moving Out, I knew I had to check it out on Nintendo Switch. Co-op focussed games are the ones I enjoy most on Switch since it’s so easy to hand over a Joy-Con to someone else to get portable co-op action on the go. While Overcooked only made it to Switch later on, Overcooked 2 arrived right from the get go and was a much more competent release and a much better game. Having spent some time with the full version Moving Out on Nintendo Switch, I can see a ton of potential here.

Moving Out from SMG Studio and Devm Games is another take on the physics based hilarious co-op gameplay structure that Overcooked excels at. You start out in a linear tutorial that has some great retro commercial styled voice acting before you get control of your truck to help all sorts of people move out. Moving Out is spread across dozens of levels that slowly introduce new things to you in the form of obstacles or enemies that exist to waste your time and lower your overall score. Your aim is to move various furniture and objects into the truck to complete a level. These range from small boxes to large sofas and even haunted chairs. Each level also usually has a few hidden objectives like scoring a few basketball hoops or delivering something without breaking a vase. There’s a lot of replay value as you try and finish these objectives or go for a faster time.

When it comes to visuals and performance, Moving Out looks good docked and handheld. It doesn’t look as crisp as it should be but it gets the job done. Performance is where things take a slight hit. As expected, Moving Out targets 30fps on Nintendo Switch. It mostly manages to feel good but there are instances of frame pacing that get annoying. I noticed more frame pacing issues when played handheld on both my Switch and the Switch Lite.

There are two things worth highlighting when it comes to the actual gameplay. The first is the addition of an assist mode. Using this, you can increase the time limit, make objects disappear after delivery, reduce the difficulty, skip a level if you fail, and reduce the weight of items designed for two players. All of these options are available through assist mode toggles. If you play solo, while the levels are playable, some of these will help you out a lot. The screenshot below is from assist mode with two players on single Joy-Cons in handheld mode. The second thing worth highlighting is the lack of online. After Overcooked 2 brought online, I fully expected Moving Out to ship with online. While PC players can use Steam’s new remote play together feature, it isn’t an option on Nintendo Switch. Moving Out is a very good game but it truly excels if you have someone to play with so keep that in mind.

In terms of Nintendo Switch features, Moving Out has no touchscreen support but it does support single Joy-Con play in co-op. It has decent rumble as well during gameplay and a bit of rumble to notify you that a level is about to start. It also supports the Nintendo Switch video capture and has a lovely icon for those who worry about those things.

Overall, Moving Out has great gameplay that needs a bit more work to truly shine. While the levels are inventive and the game’s music never gets old, I can’t help but feel like some things feel a bit janky. Moving certain larger objects almost feels like I’m playing the game wrong in some situations. Hopefully the game does well enough to get post launch support in the form of new levels. I can see myself playing Moving Out on Switch for a while. I also appreciate the Simpsons’ Sideshow Bob reference in the tutorial as well.

No online mode
Some performance issues

Moving Out on Switch has the potential to be the next Overcooked with some more polishing of the core gameplay, but regardless, it's a lovely new co-op experience From Team17.