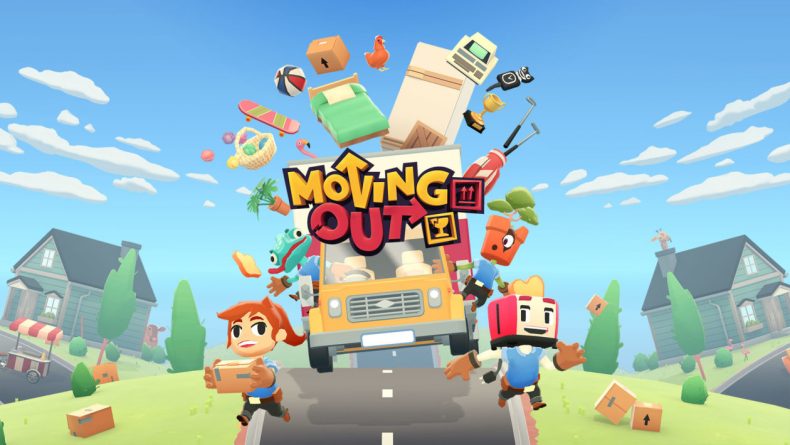 The most frustrating thing I’ve ever been through in my life is without a doubt moving house. Heavy lifting, furniture getting stuck, arguments with your other half, and the constant cleaning afterwards to make sure everything is how you found it. I’m sure my wife wanted to kill me after moving into our current home, but she’s too nice to admit it. Anyway, packing up and the entire moving process is a horrendous chore, so why the hell would someone make a video game about it??

Thankfully, the people at DevM Games and SMG Studio have managed to take away most of the frustration and replace it with gags and pleasant physics-based puzzles that make Moving Out a lovely game to play. The premise is simple: you’re part of a removal company that must help the residents of the town of Packmore move house. It’s a colourful and charming neighbourhood, and as a Furniture Arrangement & Relocation Technician (yep, you’re a F.A.R.T.), it’s your job to visit a wide range of houses, buildings, businesses, and farms to pick up their prize possessions and pack them into your van.

The control system is easy to get used to. Pick up items, jump freely from platforms and floors, throw smaller objects through windows or into your van, and get from A to B swiftly. There’s little else to learn, and once you get the hang of the physics involved, it becomes a satisfying game to play. You’re completely free to choose how you get everything in your van, and having such a streamlined control system makes everything that much easier. Each location offers plenty of challenges. On the farm, I had to chase down mischievous chickens, sheep, and pigs and get them to stay in the van. The whole farm was covered with rakes, and in Sideshow Bob from The Simpsons fashion, I had to avoid them or else I got walloped in the face. The animals wouldn’t stay in the van, so I had to come up with ways to keep them in there. There was a haunted house that had chairs with lives of their own, so I had to think in a similar way so that they wouldn’t float off once I’d got them in my removal van.

On top of pesky animals and possessed furniture, you’ll also find plenty of obstacles that hinder your efforts. In one office building, I had ghosts chasing me through the hallways as I tried to get water coolers, photocopiers, and other items in the lift. In one home, there were switch systems that I needed to press to open doors and garages so that I could get certain items out. Moving Out is filled with these puzzles, and working out the best way to activate and evade these obstacles make it a very enjoyable game.

With it being a physics-based game, a lot of the items are heavy, and you can’t simply carry them like the odd box or toaster. Double beds, sofas, and pianos can be tricky to move around, especially when some of the walkways are narrow. You can break windows and throw things out of them, or use the environment to make it easier, but with each place feeling completely different, you’ll never find a problem solved the same way. On top of all of the kitchen utensils, furniture, and boxes, you’ll also have to carry fragile items, and if you aren’t careful they’ll smash. This adds another layer to the mix, meaning not only do you have to get everything to your van as quickly as possible, you have to be sensible as well. Each location gives you a time to beat, and you’ll unlock gold, silver, and bronze rankings depending on how efficient you are. Once completed, three bonus objectives are revealed for that location, meaning you can head back in and try to finish them as well.

What I found wonderful about Moving Out is how accessible the developers have made it. If you’re struggling, there’re a ton of options meant to help you out, such as allowing you more time to finish a level, or items disappearing once they’re in the van, meaning you don’t have to try and pack everything in tightly. There’s also an option to make the game accessible for those with dyslexia, changing the font to be more readable.

After completing certain levels, you’ll unlock new characters, and there’s such a wide range of friendly and funny faces to choose from. You can be a chicken, a robot that looks like a Transformer, a plant pot, a fried egg, and so much more. Kudos to the developers as well for including the option to have any character travel around in a wheelchair. It’s a sweet gesture, and something they didn’t need to do, but it fits in with player accessibility – something they clearly wanted to address.

Moving Out is filled with plenty of beautifully designed buildings, providing plenty of challenges for you to enjoy alone or with up to three friends. It’s a lighthearted escape, packed with humour, cute characters, and fast-paced challenges that really help to keep you entertained. Outside of the main game, there’s nothing else to do, but whether you have friends to play with, or want to enjoy Moving Out on your own, there’s loads of fun to be had.

Nothing to do outside main game

Moving Out is filled with plenty of beautifully designed buildings, providing plenty of challenges for you to enjoy alone or with up to three friends.