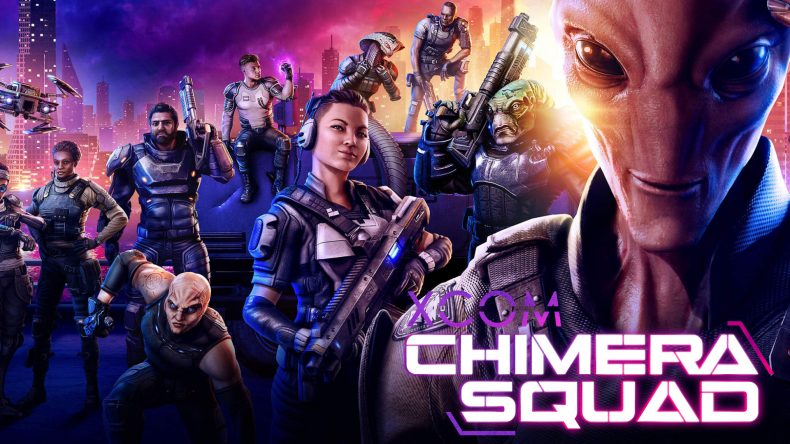 The last few months have been positively lousy with tactical shooters. Phantom Doctrine, Phoenix Point, Corruption 2029, Fort Triumph, and Spaceland have all made a play for XCOM’s crown recently, and to be frank they failed to take it due to one commonly denominating factor: they were not XCOM. Which rather broad statement sort of begs the question of why XCOM: Chimera Squad suffers from the same flaw.

Usually when a game is announced the way Chimera Squad was (with no prior warning and only mere weeks from the release date), the alarm bells start to ring. You wonder why the publisher – especially one as big as 2K Games – would keep the development of something – especially a new XCOM game – so hush-hush. You start to worry, to look for the faults before you’re really close enough to see them. “But Chimera Squad is an XCOM game, for Goodness’ sake,” you rationalise with yourself. “Surely it’s guaranteed to be spectacular?” Well, not quite, as it turns out. For every one of Chimera Squad’s new ideas (and some of them are solid, by the way), they saw fit to balance the quality by removing something that didn’t need removing. For example, gone is the deep customisation of your soldiers, replaced now by a pre-made cast of characters with compact skill trees, pre-determined backstories and a penchant for annoying banter between salvos of plasma fire.

But I’m rushing ahead here. First I should point out that XCOM: Chimera Squad is a deliberately smaller title than Enemy Within or XCOM 2. In fact, it almost feels that Firaxis are using the budget price and quiet release to prove out a few of their new ideas. I mean, some of them are great, but the elements that have been removed seem to have been cut purely to facilitate the tightening of belts.

For a start, everything is on a smaller scale here. Downsizing from the international crisis of the last few games, Chimera Squad’s beat is not the global stage but a single city. City 31 is a multi-species metropolis where the majority of the alien races who have spent the last 25 years causing so much trouble for humanity have come to learn American slang. There is peace, and an incredibly interesting world that kind of just spins in the background and doesn’t get the chance to explore itself. Instead, the aliens just banter like they’re New York born-and-bred. Which is okay, I suppose. I mean, the plot doesn’t leave much room to go the Alien Nation route, but it still would have been nice to have the alien races act a little less human. In fact, the incessant banter is one of the more egregious sins committed by XCOM: Chimera Squad. Because these characters are pre-made, they come with baked-in “personalities” that seem to have been copied down from the Big Book of Character Cliches. They’re essentially all “snarky but…”, with various other adjectives following the “but”. One is snarky but cocky, one is snarky but by-the-book, one is snarky but aggressive. Firaxis have reached for natural chemistry but fallen a little short, and the majority of the banter feels forced.

You also can’t customise them beyond changing the armour tint in a variety of dull colours or switching their loadouts – even the guns only change later when you start to find the “epic” weapons. The reason this matters isn’t that we all love to play dress-up (though we do, let’s be honest), but rather because the sense of kinship you felt with your squad in the earlier games is missing. Yes, I admit I grew attached to a few members of Chimera Squad (ex-cop Blueblood, medic Terminal, and psychic alien Verge, in particular), but without the feeling that I had created them, biographies and all, and could lose them permanently from any foolish mistake, I didn’t feel as connected. Permadeath is an option, though, of course. You can play the whole game in Ironman Mode with permadeath on and the difficulty set to Impossible, if you want the challenge, but that’s not the point. The most major change, though, is to the mission structure. No longer are missions long, heart-in-the-mouth endurance tests where your soldiers barely make it out alive and even the tiniest scrape can put them out of action for several days. Instead, each mission is presented as one to three Encounters on a standard grid-based map, which take place in only a couple of rooms. Each Encounter begins with a Breach, where you line your four Agents (and you can only ever bring four, never six) beside one or multiple points of entry, and all advance at the same time. This means you get four free attacks at the start of every Encounter, but don’t get to choose where your Squad is initially positioned if you want to fire. After each Agent has taken a Breach action (either firing or using a flashbang or other consumable), they’ll slam into the nearest available cover, which isn’t always the best.

Turns are now interleaved, too, so individual units act based on a variety of factors from class to skill. Sometimes you’ll get to move several Agents in a row, and sometimes you’ll alternate with the enemy. Thankfully, Chimera Squad is a diverse bunch, with a huge selection of skills and abilities, some trained and some afforded by an equipped Epic weapon or item. With the correct build you can control the enemy, ensure your Agents get an extra attack each round or every few rounds, and protect one another. Teamwork is key. For example, Terminal has an ability called Cooperation whereby she can allow any other Agent to use one of her action points. Which means if you have an Agent staring down the maw of a Berserker with low health but a higher spot in the turn roster, Terminal can allow said Agent an extra shot. Verge can mind-control enemies, while explosive expert Claymore has a shrapnel grenade with no cooldown (though most other skills are on a timer). With the right squad it becomes a little easy on Normal difficulty by the back half, but you can make lots of tweaks. You can, if you want to, change a setting so that you don’t heal at all between Encounters, and you can adjust the difficulty between missions if it’s not challenging enough.

If anything, though, I felt that XCOM: Chimera Squad outstayed its welcome just a little. The campaign sees you taking down three enemy factions in City 31, in an attempt to stop citywide Anarchy (think of it as the same as Enemy Unknown, but a single city and not the whole world). Each faction hides behind 5 main missions, but there are lots of smaller missions in between that afford gear, money, Elerium, or Intel. Elerium allows you to carry out research projects in the Assembly, while Intel is used to trade on the Scavenger Market and assign field teams to the districts of City 31 to reduce civil unrest. It’s not as deep or as intricate as XCOM usually is, but at least the base management is there in a rudimentary form. You can even assign idle Agents to covert ops or send them for training, which takes several missions’ worth of time to improve their stats or remove debuffs caused by injuries. The problem is that you can only unlock 8 of the 11 available Agents in a single playthrough (and if you play the Tutorial, the first four are chosen for you), and my first playthrough took me 20 hours. It doesn’t sound a lot, but the mission variety is incredibly thin in Chimera Squad. Almost every mission is the same, even when the objective changes slightly. Sometimes you’ll need to secure a VIP, find a high value object or prevent enemies escaping, but the objectives are never, ever approached in a different way, and the mission areas are so small that it often takes only one move to evac everybody once the objective is complete.

Elsewhere, the same visual glitches and bugs we know and love from XCOM games past persist here. Clipping and collision issues, missing animations, Agents and enemies firing in the wrong direction. They’re mostly forgivable and not game-breaking, though, unlike the bug that caused my game to crash me back to desktop no less than 9 times in a 20-hour playthrough, once requiring a restart of my PC. It seems to only occur during the debriefing by Director Kelly after returning to base, so hopefully it’s something Firaxis can fix quickly.

Ultimately, XCOM: Chimera Squad does little more than fill a gap while we wait for the inevitable XCOM 3. It’s not as radical a departure as The Bureau: Declassified was, and there are elements of it that feel reassuringly familiar, but I couldn’t shake the sense throughout that something was missing, and by around hour-12 I was starting to feel a little fatigued. I was still unlocking new gear and skills, but I was getting no new Agents and, despite the enemy changing up a bit with each new Faction I faced, it was all starting to look a little same-y. Your mileage may well vary, however, and it certainly wasn’t enough to take away the element of fun that kept me playing to the end. And, when I was done, I immediately started a new game without the Tutorial to sample the Agents I hadn’t met.

More than anything, Firaxis appear to be testing the waters with XCOM: Chimera Squad, and as a field test it's mostly successful. However, it ditches far too much of what makes XCOM so fantastic in the first place.