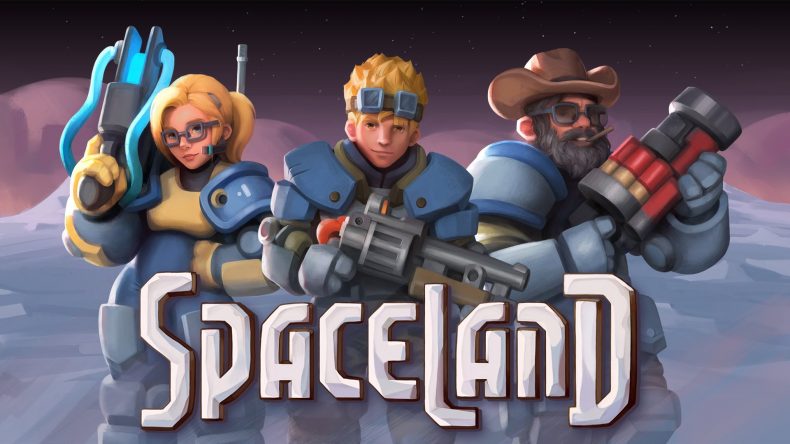 I like Starcraft. I like XCOM. Mash the two together and you’ve got Spaceland, which is probably why I enjoyed it so much. It even throws in a hint of Starship Troopers, another surefire way to enter my heart. Not to mention references to classic franchises, including one smile-inducing Legend of Zelda quote. There’s a danger of going too far with this level of referential material, but Tortuga Team’s turn-based strategy manages to restrain itself when necessary.

Space Rangers Jim and Barret crash land on an unknown world, while investigating a distress beacon. Jim wakes up to find his partner missing and goes off to investigate, finding a sprawling industrial complex that, it turns out, is a little bothered by mutant creatures that occasionally enjoy snacking on humans. It explains the lack of people around the complex, not to mention the distress beacon.

Upon finding his partner, the reunited Jim and Barret begin searching for the source of the distress beacon and any survivors along the way. Some of these are merchants and scavengers, from whom you can pick up technology and weapons that can be repaired and added to your arsenal. Other survivors are part of a team sent to this planet as part of some mysterious mission, making them ideal candidates to join your growing squad as you continue to explore and investigate the planet. Exploring comes mainly in the form of an overworld map, with a mostly linear path that extends with each mission completed. It’s in these missions where Spaceland really shines. As I said earlier, both Starcraft and XCOM seem to be influences on developer Tortuga Team, with the isometric viewpoint, colour palette and almost stumpy, stocky character designs instantly conjuring images of Starcraft’s Terran units. The gameplay however, is undoubtedly influenced by Firaxis’ fantastic, modern XCOM games. It’s not a straight rip or anything, more an homage, as Spaceland has a more bite-sized mission structure, with some interesting conservation strategy required.

Usually only allowing a three-person squad, with that rule occasionally relaxed during certain story missions, you enter each environment on a grid of squares. Each character can move a certain amount before their turn is over, then the mutant/alien creatures get their turn. There are green and grey movement squares, and moving to a green square still allows the character to use an ability or fire their weapon, whereas moving to grey squares exhausts the ability to do any secondary action. If you’ve played XCOM (or even Mario + Rabbids) then you’ll be instantly at home here. Unlike those games however, Spaceland’s characters only have a limited number of shots for each mission. You can’t just take out every enemy and calmly reload whenever your clip runs dry. If you run out of ammo, the only option is to restock using the one-use crates that are sometimes dotted around the map. This adds to the strategic element, having to decide whether to save your shots or risk running into a stronger enemy with an empty gun. Yes, that happened to me. No, the character didn’t survive. Luckily, unlike XCOM, death isn’t necessarily the end for your characters. They’re simply gone for the rest of that mission, unless the objective specifically requires the survival of a certain character. Otherwise, you’ll simply be penalised at the end of the mission. Or, occasionally, when a character’s questionable pathfinding leads them into a mine, for no reason whatsoever.

Upon completing a mission, you’ll be awarded coins and salvage depending on how well you did. Did everyone survive? Did you get to the exit within a set number of turns? Did you discover the level’s secrets? Do those things and you’ll be able to afford upgrades for both weaponry and equipment, which can be very handy the further into the game you are. Jim’s ability to dash behind enemies is excellent, and upgrading Terra’s healing ability is well worth the spend, not to mention better weapons and increased ammo capacity.

Whereas XCOM 2 doubled down on the difficulty of Enemy Unknown, Spaceland offers a more fun, less brutal experience. Not that you won’t be savaged if you make too many mistakes, but the penalties are much more forgiving. Some hardcore types will probably think it’s too easy, but I found it refreshing. It’s also a great option on the Switch, looking and playing brilliantly in either docked or handheld modes, plus the bite-sized missions are excellent for preserving the ol’ battery life.

If you like your turn-based strategy games and you don’t mind it a little less brutal, I can’t recommend Spaceland enough. It’s fun to play, doesn’t take up too much of your time if you fancy just dipping in for a mission or two, and its lighthearted characters are delightful as they bicker amongst themselves. Spaceland’s mixture of Starcraft’s colourful visuals and XCOM’s turn-based strategy really is a treat.

Mashing together Starcraft and XCOM, Spaceland is one of the most fun, turn-based strategy games out there.

StarCraft II: Legacy of the Void Gets Release Date