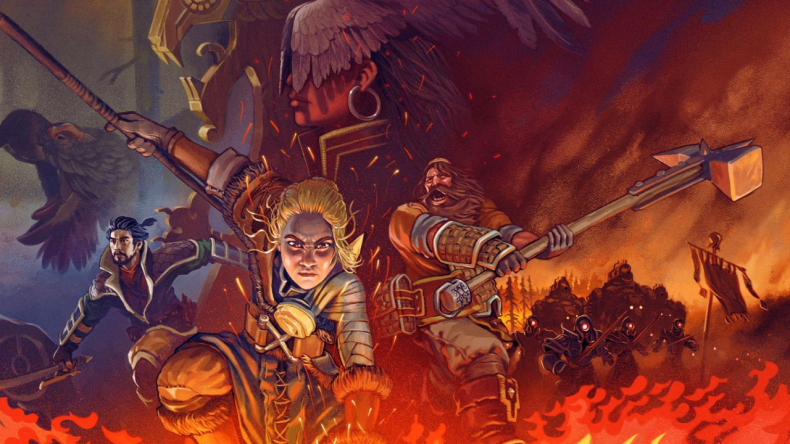 Iron Danger is a silly title. Initially this is what put me off even looking at it. You can say that’s unfair, and I probably wouldn’t argue, but the simple fact is that it’s a title that has little to no meaning in the context of the game’s world or genre. It’s just two random words thrown together that make the whole thing sound like some kind of weird mecha action game with iffy localisation.

In fact it’s hard to categorise Iron Danger in any satisfactory way. It’s neither an RPG nor a straight action game, it’s not an isometric looter either, despite looking like one. In fact, it plays like something both old and familiar, and yet brand new. I’ve only played a beta build so far, and much of what I’ve seen looks like placeholder, from UI icons and dialogue to cutscenes and animations. If these are not placeholder I apologise, but there’s certainly work needed in these areas in particular.

You play Kipuna, a young girl whose village is attacked by dark forces in the opening half hour, and alongside the burly quartermaster Topi, escapes the onslaught and heads for the woods across the channel. But it’s how this action takes place that makes all the difference. After falling into a chasm and apparently dying, Kipuna is granted a gift by an apparently benevolent spirit which allows her to rewind time by 14 heartbeats. The downside is the whacking great glowing shard embedded in her chest, but what are you gonna do?

Once you have this power, it forms the basis of everything you do going forwards. Topi is a fighter, and uses his huge warhammer to great effect, but he’s an oldan and not as spry as the enemy soldiers ranged against him, nor as powerful as the 12-feet tall battle “Harnesses” employed by the Northlanders. Luckily, Kipuna’s newfound powers help to even the odds. When you enter combat, time will pause, signifying that Kipuna has entered the Trance. You can now move freely along the time line for the last 14 heartbeats in 0.5 second increments. If any enemy strikes Topi, you can rewind time and reposition him, ordering him to block at the exact moment required to deflect the attack and counter it. Combat becomes a truly tactical exercise, as you constantly manage your timeline to use Topi’s strength in the most efficient way. Every heartbeat matters, and if you paint yourself into a corner the only way to generate more time is to allow it to pass, which means moving around to avoid attacks and increase the blue portion of the timeline.

Topi has a variety of attacks and special moves on an action bar, and can heal. By consuming food scavenged from the surroundings, but his role is to keep Kipuna safe at all costs. Combat feels exciting and tense, and the time manipulation is always entertaining, even when you’re not in combat and you’re just trying to avoid a catastrophe in the world.

The art is chunky and cartoony, similar in many ways to Torchlight, though some areas did feel a little unfinished in the beta build. Hopefully by the time Action Square bring the full release to consoles and PC, they’ll have patched them up.

As it stands it’s an enjoyable adventure with some unique ideas, and a core concept that does something very new with the time manipulation element. There’s a little time before release to iron out the kinks and improve on some of the features, and if Action Square pull it off they could have one of the most interesting titles of recent months.

Senior Content Editor Mick has been playing games for over 30 years and writing about them for around 12. After drifting from site to site for a while, settling briefly at the now-defunct Made2Game and freelancing for the gone-but-not-forgotten NintendoGamer Magazine, he came at last to rest at Godisageek. Mick has been a reviewer, staff writer and content editor here for some time, while also moonlighting a little for Red Bull Games. He has 4 kids, has written 2 novels, and sometimes even manages to pay a bill or two. You'll usually find him defending the galaxy in Destiny 2, battling evil in Diablo 3, or lurking in the background on Twitter. Find him there @Jedi_Beats_Tank, or on XBL (JediWaster247), PSN (Jedi_Waster) or Nintendo (JediWaster).
MORE LIKE THIS
Iron Danger