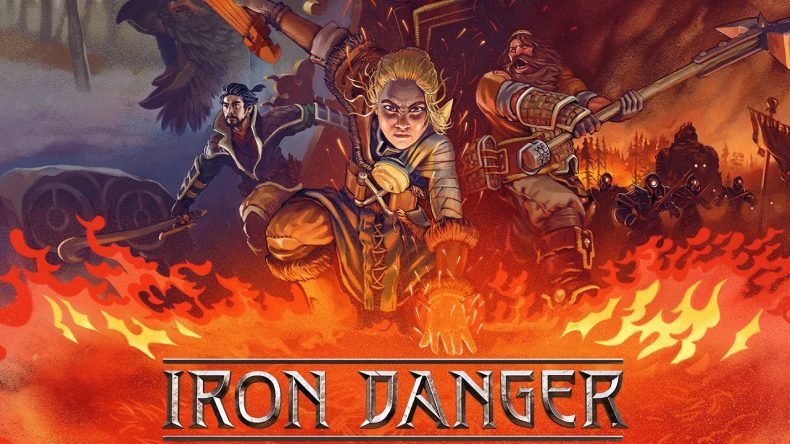 There are plenty of instances every day when I wish I could turn back time for a free mulligan, which is the premise of Action Squad Studios Iron Danger, a game where you can hit rewind after any cock-up to rewrite history and, hopefully, come out on top. It’s based loosely on Finnish folklore, a rarely-plundered resource in games or films, and sees protagonist Kipuna granted the power to alter the timeline by a magical shard stuck through her heart.

After escaping a raid on her village by the industrialist Northlanders, Kipuna and her first companion Topi must evade capture to reach their capital and help rally an army to fight back. It has been called a Tactical RPG, but the latter element is considerably lesser than the former. There are moves to unlock for each character after a mission, but there’s no XP to earn, no loot to equip and no levels to climb through. Instead, missions follow a linear path for 12 to 15 hours as you pick your way from A to B, often outnumbered. By the late game you’ll have unlocked enough skills to be a formidable force, but initially Iron Danger is tough going. The central conceit is the time travel mechanic. Hitting space puts Kipuna in Trance mode, which allows her to travel back over her recent timeline (around 14 seconds’, or heartbeats’, worth) and avoid danger. Usually – though not always – allied with one other character, each battle becomes an intricate puzzle of cause and effect, of dying and retrying. As Kipuna launches a fireball, for example, and her partner slashes a sword or swings a forge hammer, the enemy will be making their own moves, launching crossbow bolts or leaping to attack.

It takes only a few hits to kill any of your characters, and so each fight means carefully orchestrating your moves to match and outfox the enemy. If someone is leaping at you with axe raised, you’ll need to time a block or dodge just right, scooting back over your timeline to find the optimal moment like you’re scrubbing video footage in an editing suite. Your opponents don’t have the same ability, but they do have the advantage of numbers more often than not.

For the longest time I couldn’t get to grips with Iron Danger, even having played the early access demo a while back. It’s a neat premise and it’s executed well enough, but it’s so fiddly and unforgiving that I found myself in what can only be described as a “tizz”, developing a mild headache as I spun around and around through the same window of heartbeats trying to dodge multiple crossbow bolts and angry brigands. Each character has their own list of special moves to employ, and Kipuna herself is a dab-hand with fire magic, which comes in handy for dealing damage over time and halting the advance of the pesky, demonic reziks who are drawn to her power. Her companions on the other hand are more old-fashioned, using melee weapons and skills to deal damage while Kipuna must keep them safe, or at least keep rewinding their grisly deaths. There’s a stealth element whereby Kipuna can hide in long grass to navigate by enemies, but if you trigger one you often trigger all of them in the vicinity, and it’s often safer to try to pick them off as you go when they’re in smaller groups around campfires or hiding in storerooms. Initially there aren’t many ways to heal other than food you’ve scavenged, and it’s not uncommon to walk into an encounter already at low health.

Outside of combat, there isn’t an awful lot to do. Environmental puzzles pop up now and then, but there’s little reason to wander of the prescribed path. Also, I can’t work out why it autosaves, because at one point I had messed up an encounter to the point that I couldn’t win it, so attempted to reload a previous save and was dropped all the way at the beginning of the mission, which induced a fair bit of colourful language. Iron Danger is a pretty game, reminiscent of Torchlight the way it’s animated and coloured, and the characters are a likeable bunch, a fact helped by the writing. It’s not going to trouble Game of Thrones in its early years, but Iron Danger has a decent script and some great performances, particularly from Kipuna’s voice actress.

When I first played Iron Danger I had quite high hopes for the eventual release, and in many ways Action Squad has met those expectations, but I couldn’t shake the feeling that Iron Danger as an experience relies so heavily on the time-travel combat mechanic that it doesn’t really present you with much besides that. Everything else is a little bit bare bones. There’s little reason to play it through a second time, and despite its interesting set-up, I’m not sure there was enough in the first play-through to leave a lasting impression through the coming months.

Infuriating, even dizzying, at times
Core mechanic overshadows everything else
Little replay value

Iron Danger as an experience relies so heavily on the time-travel combat mechanic that it doesn’t really present you with much besides that. Everything else is a little bit bare bones.