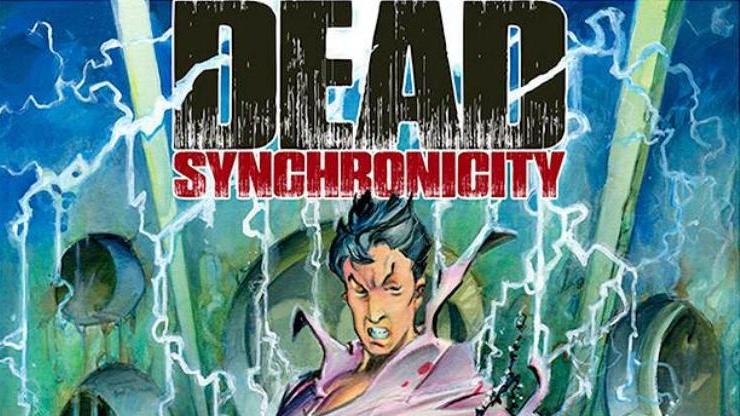 Ten years ago, the games industry was lamenting the lost art of the Graphic Adventure. But now, thanks to platforms like Steam and crowd-finding via Kickstarter, small-scale adventure games are a dime a dozen. Whereas gamers once had no options, now there is the problem of picking out the titles worthy of your attention. Dead Synchronicity immediately stands out as one that you shouldn’t miss.

First-time developers Fictiorama have eschewed the common route of cartoony, humourous adventure games, focusing on a much more serious, adult storyline. Shades of classic science fiction such as the work of George Orwell and Philip K Dick abound in this dystopian future. Players take on the role of Michael – an amnesiac who has awoken in a world ravaged by disaster and struggling to maintain a semblance of modern society. This isn’t just a cheap use of that old memory loss premise however, as the cataclysmic events happening around the world have not only caused some residents to lose their memories, but others to lose their minds completely. The Great Wave hit, and sent the world back into the technological dark ages. Society tried to hold itself together, but a shortage of food, water and shelter has caused the situation to degenerate into a fight for survival – with the sadistic army declaring martial law and taking over. Those who have money can remain in the city, while the general populace – the Rats – are forced to live in refugee camps, which are more like prison camps. This allows for some grisly and unsettling scenes, where similarities to Auschwitz and other terrible places spring to mind.

Not only did the Great Wave knock out all technology and open a mysterious purple rift in the sky, but it also brought with it a terrible plague – with those who become infected known as “the dissolved”. Their mind begins to fall apart, leading to hallucinations, mental trips and visions of speaking with the dead. Not only does the populace live in fear of contracting the disease, but also of the over-zealous military who will kill anyone exhibiting signs of, or harbouring those with, the infection. These men must be avoided or appeased if you want to successfully live to fight another day. It is in this atmosphere of distrust and tension that you must guide Michael. Himself saved by a Good Samaritan, he is now tasked with somehow tracking down a rumoured cure for the affliction, with the added promise of discovering more about his own past. The gameplay is classic point and click – with context-sensitive interaction icons that will switch depending on the most logical interactions with a person or object. This isn’t a complex or innovative system, nor does it need to be, and this serves the minimalistic, run-down aesthetic pretty well.

What makes Dead Synchronicity stand out against its peers, is that once you have played through the extended first act, the gameplay opens up and becomes more liberated than many modern adventures. Several puzzles and plot lines can be hanging open at one time, allowing you some freedom to tackle each in the order you choose. Thankfully, this means that whenever you find yourself stuck on one task, there is always the option to go back and investigate another lead, rather than becoming too frustrated. There is no in-game hint system, but the spacebar highlights all hotspots – eliminating the dreaded pixel-hunt. A journal system also keeps track of recent events and useful information, which is handy for moments when you have to back-track. Not only is Dead Synchronicity stylish from a science fiction story point of view, but the visuals are also quite unique. Hand-drawn backgrounds really set the scene and portray the dirty, dank hopelessness of life after the Great Wave, being highly detailed and atmospheric, although maintaining a painterly expressionistic style. The character design is also very unique, with the characters appearing very angular and somewhat stretched – a reflection of the taught, painful reality of the situation they are in. Despite the 2D presentation, the camera is not passive and pans around backdrops, zooming in and out on important actions and conversations – providing a certain energy that many adventure games lack when using a static camera.

The action is punctuated by an eerie mix of electronic and guitar-driven music, which is a good extension of the atmosphere created visually. There were no voices in the preview build, but let us just hope that they can lend the sort of seriousness and weight that the tone of the story requires. One feels that Fictiorama will most likely nail the voiceovers, as the rest of Dead Synchronicity comes across as such a confident first outing. You would think the company had been developing adventure games for some time, such is the self-assured hand that has created this disturbing and immersive dystopia. It will certainly be exciting to join Michael on his quest in the full game, but we should be prepared for a sombre and disconcerting ride along the way.