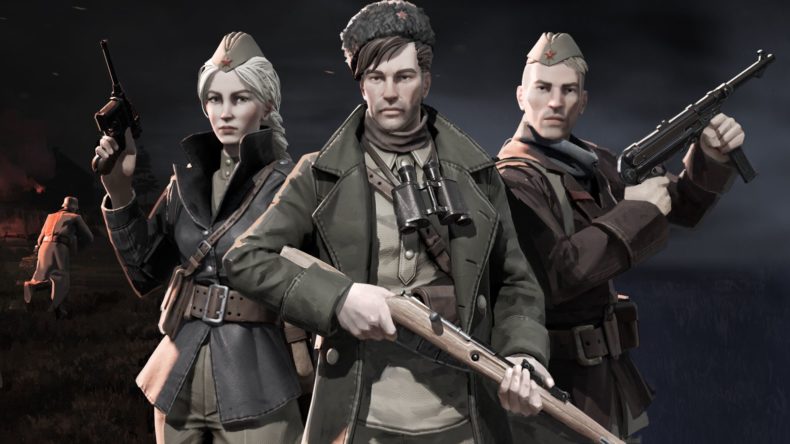 No matter how cool and enjoyable Partisans 1941 is at times, there’s a thing it does that I couldn’t help but fixate on. See, all the bad guys are either Nazis and speak German (or English with German accents) or they’re Russian polizei, who sympathise with the Nazis and speak Russian or German. But all the “good” characters, despite being Russian themselves, speak with clear, regional British accents. I can’t explain why it annoyed me so much, but it did, even more than the dodgy voice acting.

Commander Zorin, your protagonist, sounds a bit like Clive Owen, for example, which kept making me forget that Partisans’ plot isn’t another “Yee-haw, America!” or “Good old British” war story, but rather a focus on the Partisans themselves, a rough and tumble bunch of  Russian ex-prisoners of war and general freedom fighters. Assembled by Zorin after his escape from a PoW camp, the Partisans set about harrying the Germans and their allies in a variety of ways from sabotage to assassination from their secret hideout deep in the forest. It’s all very Robin Hood, which adds to the sense of adventure and makes up somewhat for Partisans’ no-frills aesthetic. 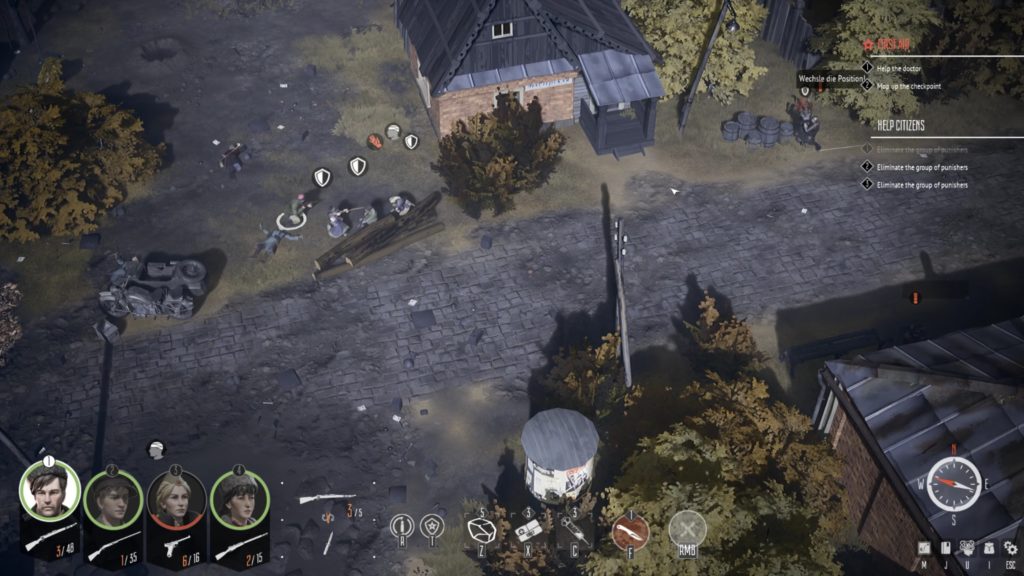 It’s very mechanically similar to Commandos and Desperados, as you move around your group of characters using environmental stealth and a variety of skills to avoid or defeat patrolling enemies. Zorin is even a dab-hand with a throwing knife like Desperados III’s John Cooper. While the characters here simply aren’t as colourful, well-written or fleshed-out as they are in Mimimi’s barnstorming Western, they get the job done, bantering back and forth with a little forced sincerity, and each bringing their own skills and abilities to the party.

Fourteen-year-old Sanek, for example, can wear disguises and slip through German patrols, while medic Valya can heal your team faster than the others, and happens to be a crack shot with a sniper rifle. The fact that they all have a better affinity with specific weapons or weapon types to the point that they have dedicated branches in their skill tress for specific weapons and play styles makes the ability to switch weapons a bit pointless, but at least the option is there. 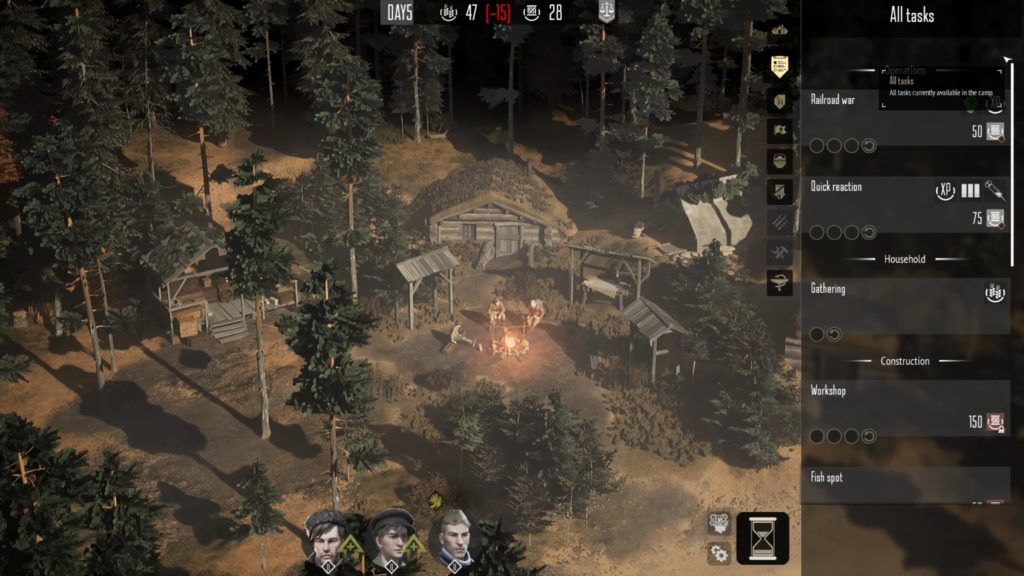 The minute-to-minute gameplay in Partisans 1941 is less intensely tactical than its closest genre-mates, with most encounters easily erupting into gun battles. The shooting is a lot of fun, with Space slowing the action right down to allow you time to react and make decisions. While stealth is an option, the AI is pretty hard on the sneaky, with enemies spotting you quite easily if you stray into their view-cones and able to hear a pin drop from a few feet away. They’ll also investigate anything they see that appears out of place like, for instance, a six foot blonde Russian woman trying to surreptitiously dump a Nazi body in a blackberry bush.

In between missions you return to camp, where you must assign your Partisans jobs to aid the greater cause, from gathering food and resources to going on off-screen missions summarised by a short after-action report. You can also upgrade and maintain said camp, building things like a medical tent and a workshop where you can turn scavenged loot into weapons, gear and explosives. It adds a little more depth to an otherwise fairly straightforward game, and the conversations and interactions between the Partisans in camp helps warm you to them. 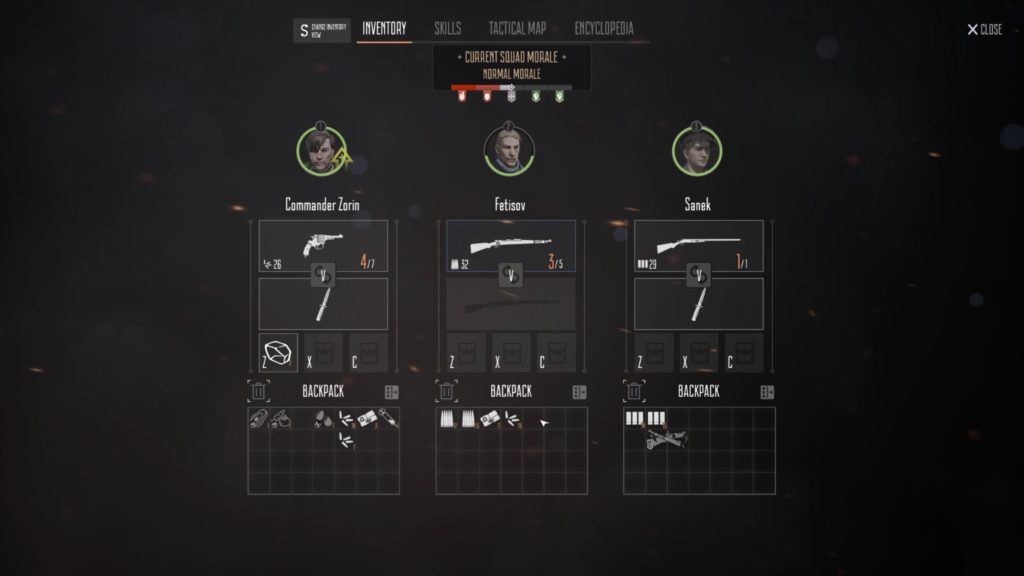 If Partisans 1941 has a single glaring issue it’s in its presentation. What made Desperados so immediately appealing was its setting, painted in bright colours and lavished with detail. In contrast Partisans is a very brown and grey game, with generic-looking characters and an overpowering sense of blandness in its aesthetics. It feels almost like its trying to force you to get bored, directly at odds with the exciting and, dare I say, emergent gameplay. Because Partisans 1941 is most enjoyable when it’s going wrong. Sure, you can quicksave and quickload at the push of a button, but when you fumble a mission and the alarm goes up and you’ve no choice but to dig in, watch your flanks and work together to administer the (fairly abundant) healing items and share the (frustratingly rare) ammunition, it becomes a tense, exciting and highly enjoyable experience.

It’s a little unfortunate that Partisans 1941 came out in the same year as Desperados III, because judged on its own merits it’s a well-made adventure game with enough new ideas that it doesn’t need to fully ape its inspirations and just enough confidence that it, mostly, gets away with its shortcomings. If you can look past the slightly drab exterior, fans of the genre will certainly get a kick from its earnest blend of action and tactics.

Partisans 1941 is a very good game in its own right, though it comes a little too close to imitating its inspiration. But if you can look past that, tactics fans will have a blast.