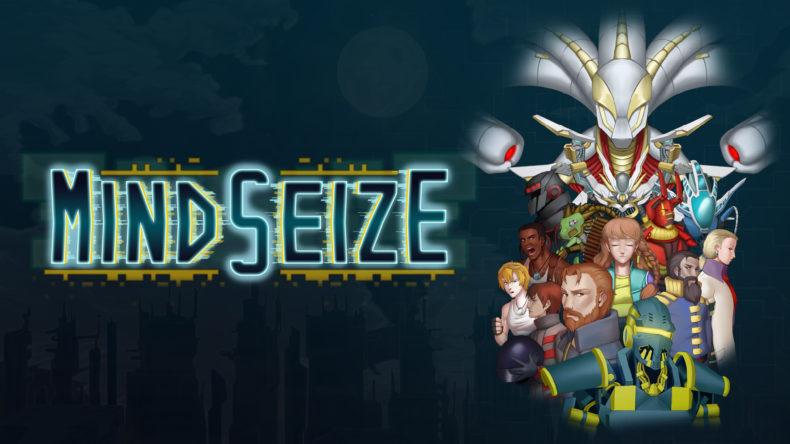 If I could only play one kind of video game for the rest of my life, I’d probably choose Metroidvania games. Slowly exploring every last square of a map, and using newly acquired powers to enter previously inaccessible areas is a satisfying gameplay loop that I never grow tired of. 2020 has seen some spectacular additions to the genre, with games like Kunai and Ori and the Will of the Wisps sure to sit high up on many a Game of the Year list. It can be hard for a new title to establish itself alongside these heavy hitters, but that’s exactly what Mindseize is hoping to accomplish.

An opening cutscene introduces you to our hero and private investigator M.C Fox, and his unfortunate circumstances. While attempting to bring down the evil criminal group known as The Ascended, Fox has a run in with their leader that ends in tragedy. His daughter’s mind is seized, and he is left unable to use his legs after a hefty beating. Foxy is out for revenge, and with the help of his crew decides to pilot a mech to rescue his daughter’s consciousness and take down The Ascended for good. The story takes a back seat after setting the stage for an entertaining robot romp, but definitely gives you some good motivation to batter the villains ahead of you. 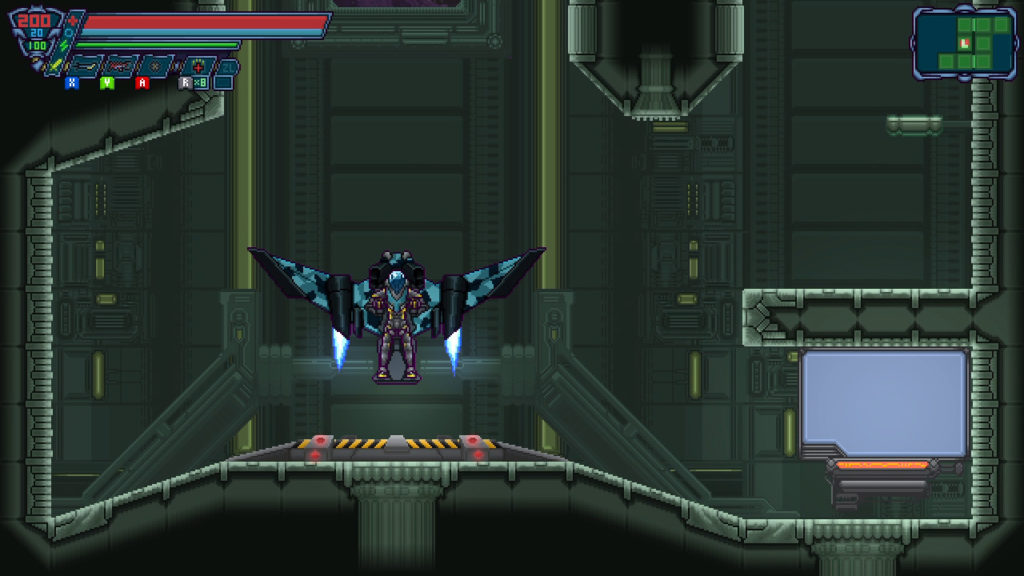 There are plenty of ways to fight your metallic foes in Mindseize, thanks to an array of weapons you’ll find on your planet-hopping journey. You begin with a basic machine gun and sword, but as you progress you’re able to switch between claws, laser pistols and many more options at any of the game’s save points. You can also use any scrap that enemies drop to buy new attacks (among other things). These range from simple upwards strikes, to powerful super moves that require energy to unleash. Fox’s offensive abilities are absolutely where Mindseize shines, and using the right tool to take down basic enemies or even bosses is very enjoyable.

If fighting bad bots is where the game shines, then exploring the different planets with all of your movement abilities is what lets it down. Your control over M.C is perfectly satisfactory, but each of the new powers you unlock just feels generic. You’ll gain the ability to slide through small gaps, then to wall jump, then double jump, and with so many other Metroidvania games releasing this year with fantastic upgrades, Mindseize just doesn’t make exploration exciting.

One thing that does make exploration feel worthwhile though, is how jaw-droppingly beautiful the environments are. Mindseize features pixel art done to perfection, with lush backgrounds and impressive character models. The forests feel alive with charming critters, and bosses are made all the more intimidating by their threatening appearance. 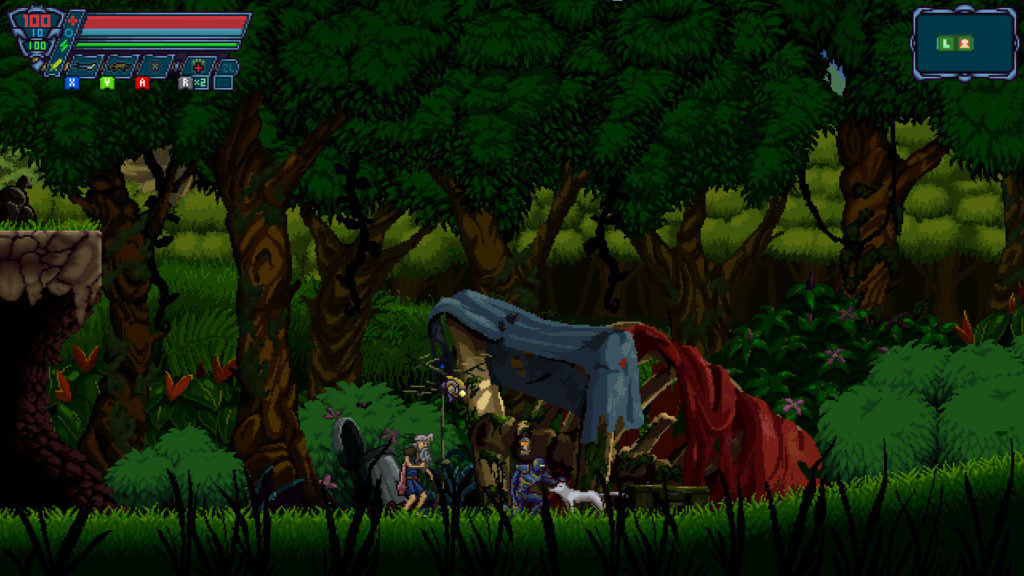 Almost every one of the fearsome bosses in Mindseize presents a serious challenge. From hulking robots to agile human-sized opponents, each one of these roadblocks requires you to learn their attack pattern, upgrade your mech accordingly and use a Nanobot or two to heal up. My first attempt against almost every one of these villains ended in overwhelming failure, but with a bit of perseverance and the right weaponry, the bosses are all beatable. It’s hugely satisfying when you finally overcome a boss, even if it required you to hunt down some upgrades from a previous world.

The various ways in which you can power up Fox’s mech are actually rather unique. My personal favourite upgrades make your melee attacks move you forward with each swing, improving your reach. If more survivability is what you need, you can also increase your Nanobot capacity and effectiveness to boost your health in a pinch. When a lot of Metroidvanias would just give you health and ammo upgrades, it’s nice to be able to improve your character in more interesting ways. 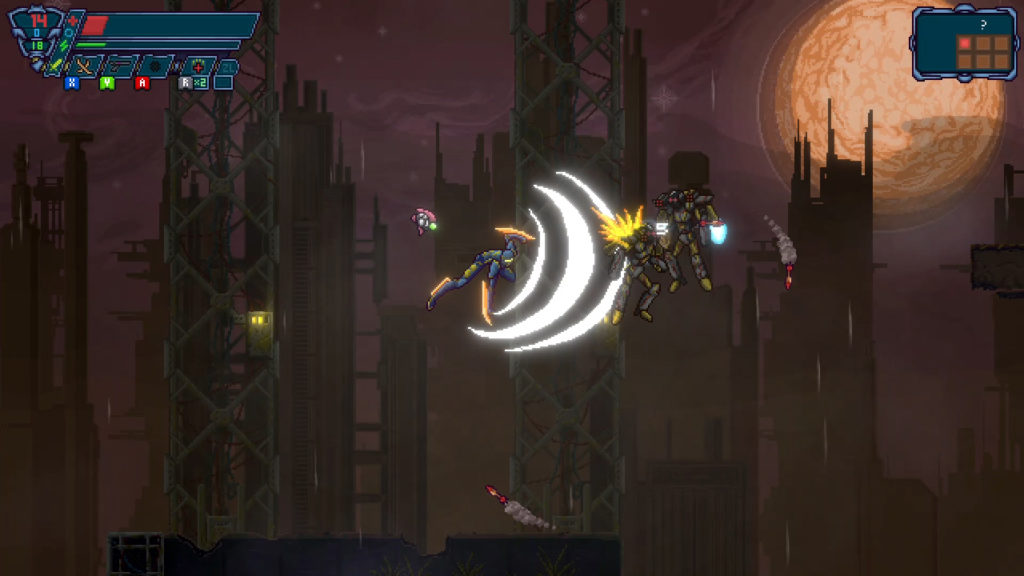 There’s a lot to enjoy packed into Mindseize, but it isn’t without its faults. I came across a lot of bugs in my time with the game, mainly relating to controls being locked. Multiple times in a short playthrough, I’d suddenly lose the ability to jump until I took damage or would start drifting in a direction (even through walls). If your health is critical and you’re far from a save point, these issues could cost you a lot of progress (and did for me repeatedly). I was also extremely disappointed in the handling of the disabled main character. Playing as a wheelchair user (if only when not piloting a robot) was something I was excited to explore, but almost immediately ableist language about M.C being half the man he once was just made me want to shut off the Switch.

In a time of many fantastic Metroidvania games, it’s hard to recommend Mindseize to all but the most dedicated fans of the genre. The combat is really enjoyable (especially when fighting bosses) but a plethora of bugs and some uninspired movement abilities stop Mindseize from reaching the heights of its peers.

Combat is great fun, with a lot of weapon variety

Mindseize has great combat and weapon variety, but the uninspired movement abilities and a plethora of bugs make it hard to recommend among its peers