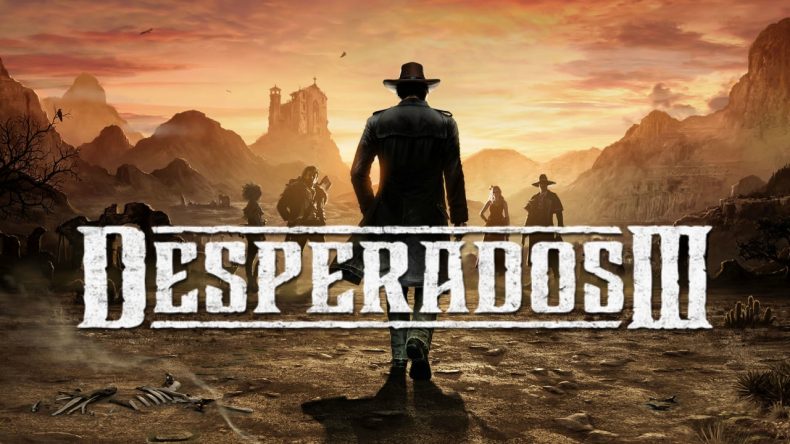 It’s a testament to developer MiMiMi that on more than one occasion I spent upwards of two hours on a single mission of Desperados III, and still went back for more. Two hours of save-scumming failure as I tried my damn hardest to make the West that little bit wilder. At the end of one particular mission the time-lapsed replay showed my route around the level, ignoring all my reloads and, thus, all my mistakes, and revealed an effective mission time of 1 hour and 6 minutes. A whole hour of the mission had been dedicated to my spectacular cock-ups. But what rubbed vinegar into that particular bloody graze was the award for speed-running the mission, with a time of just 17 minutes. It led to some fairly harsh self-reflection, I can tell you.

If you’re familiar with the Desperados series or indeed MiMiMi’s Shadow Tactics: Blades of the Shogun from 2016, you’ll know that they’re essentially isometric stealth games with a focus on using multiple characters with unique skillsets to get the job done. Desperados III is a prequel to its franchise, revealing the sort-of origins of protagonist John Cooper, the king of the cowboy swagger, and his motley crew of vigilantes. Progression through the game is marked by the recruitment of four other members of Cooper’s posse, and the acquisition of skills, gear and abilities unique to each character. Every tool and trick you unlock is of use, and open up a wonderful variety of options in each encounter, whether you’re sneaking through tight patrol zones or have been tasked with taking out individual targets across a sprawling mission area. Desperados III is without a doubt one of the most tightly-crafted stealth games I’ve played in recent years, and yet it still manages to be malleable enough that you can choose to go loud, get creative with kills, or speedrun the whole damn thing.

Each mission has a variety of optional challenges such as the aforementioned time limit, minimal or no saving, named bounties, or killing enemies in specific ways. For example, in one mission that sees you targeting railroad company employees in the town of Flagstone, kudos is awarded for making each kill look like an accident. The five characters are so incredibly diverse that you’ll be constantly surprised by the ideas that work. Kate O’Hara, for instance, can wear disguises that let her wander straight by some guards, or even flirt to distract them, lead them to specific areas, or blind them with her perfume. This being Desperados, she can also kick them unconscious or pull a pistol if cornered. Doc McCoy has a lethal syringe, a scoped and suppressed handgun, and a trick bag that attracts curious guards and puts them down. If that fails, he can crowd-control with a bottle of knock-out gas. Other characters Hector and Isabelle offer options such as a giant beartrap and sawn-off shotgun, or actual Voodoo, utilising supernatural abilities such as illusion, mind control, or chaining enemies together telepathically so hurting one, hurts the other. Individual weaknesses come in the form of their various physical limitations, often forcing you to utilise several characters at once.

This is achieved by using Showdown Mode. Hitting Shift (or Up on the controller) will freeze time and allow you set up simultaneous actions. This could be to coordinate kills, or you might need to distract one guard while insta-killing another and blinding a third. Once all your skills are primed, hitting enter or the Y or Triangle button will execute the Showdown, and the fruits of your efforts never fail to satisfy. Little touches in the environment add even more layers, such as bucking horses that will kick guards into next week if Cooper irritates them with a well-aimed coin, or rafters, boulders and signs that can be sabotaged and dropped on the enemy. Later, light plays a part, too, and you’ll need to snuff out lamps or avoid lantern-carrying cowpokes to survive. There are a few issues with enemy AI here and there, but these are issues that tend to pop up in stealth games as a rule, such as enemies ignoring obvious disappearances or discarded weapons and puddles of blood; sometimes they’ll just shrug and walk off despite seeing you drag their buddy’s mutilated corpse into a convenient bush. As I said, these are genre-wide issues, and none of them can take away from the way Desperados III captivates your attention.

Each stage is a multi-part affair, often requiring you to first infiltrate an area, then execute the main objective, and then reach a “vantage point” which usually ends the mission. Afterwards you’ll be given a full rundown of your stats and shown a replay on the area map, which removes all your retries from the runtime and tallies up each save, load, kill and death throughout. It’s possibly the coolest element of the game, and shows a tremendous attention to detail, and a dedication to making this game as much fun as possible. After a certain point in the game, you’ll meet the Baron, whose challenges will task you with completing cleared missions with different parameters, objectives, and characters, providing an element separate to the already highly-replayable campaign.

Desperados III is an exceptional game, created by a studio that know exactly who they are catering for. With the UI and control system completely rebuilt and remapped for controllers (with direct movement replacing point and click) and a large array of accessibility options to cater to players of different nationalities and ability levels, there isn’t a lot MiMiMi haven’t covered.

The story may not do anything particularly original with the genre, but the characters are likeable and well-written, if a little clichéd – although that simply adds to the Western atmosphere and helps the plot canter along at an even pace, despite the overall length of the game pushing way past 20 hours (thirty, if you play like me). Incredibly well put-together and intricately crafted by a developer at the top of their field, Desperados III is a genuine masterpiece of stealth, Stetsons, and steely-eyed heroics.

A great sandbox to play in
Cool, diverse characters
Even failure feels like progress
The Replay system is excellent

Incredibly well put-together and intricately crafted by a developer at the top of their field, Desperados III is a genuine masterpiece of stealth, Stetsons, and steely-eyed heroics.

In-depth new trailer for Desperados III shows off everything