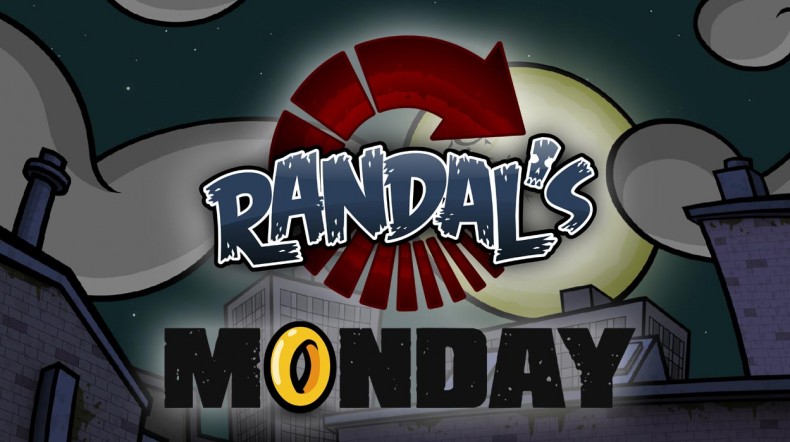 You may be forgiven for thinking that Randal’s Monday is linked in some way to the Clerks films by Kevin Smith. The titular character Randal is a wise-cracking layabout, just like Randall in the Clerks series. The characters, activities and locations in the game constantly reference Star Wars and other cult movies and comics (just as in many Kevin Smith films), and the voice actor performing the character of Randal actually played Randall in Clerks. It is confusing therefore that the game has nothing to do with any of that.

Randal’s Monday is, however, a call-back to the classic adventure games of the nineties. Controlled in a point and click style, players can choose between a more traditional control method or a simplified user-friendly one. The game begins after your best friend “finds” a mysterious and seemingly-magical ring, when things start to go drastically wrong and Randal finds himself in a Groundhog Day time loop where he is trying to atone for his actions and to put right what once went wrong, one day at a time.

Being able to re-play the same day over and over might not sound all that interesting, but while the main events – such as the death of a friend that you must prevent – will occur each day, your different actions will shape how the next day plays out. For instance, if you are broke but manage to earn some money one day, you will still have that money when that day re-starts next time, and you can use that to further change the following play-through of the day in question. This leads to some confusions over which elements will actually carry over from day to day and which won’t, but as the game is very linear you can’t make any mistakes or reach any dead-ends, so you know that the game won’t proceed until you have done everything you need to do. It creates an interesting premise which hasn’t been explored often in gaming, and one that lets you see the consequences of your previous actions evolve from each play-through of each day.

The main issue is that, although the story is pretty original and the humour actually quite entertaining, the puzzles themselves are pretty illogical. The designers of Randal’s Monday clearly took a page out of the Sam & Max book of Graphic Adventures, where your random collection of inventory items often need to be combined with little rhyme or reason in order to create a usable object. For this reason it’s very easy to get stuck on many of the puzzles.

Thankfully, a comprehensive but adjustable hint system has been included, so you can reveal a helpful step-by-step guide, getting as little or as much help as you need. Sadly, you won’t often get that feeling of satisfaction from correctly working out how to solve a difficult puzzle, and will solve most by trial and error, which becomes frustrating when it happens repeatedly. Because of all of the references to cult media, and the fact that a comic convention actually takes place during the game, Randal’s Monday will certainly be best enjoyed by players with a fairly good knowledge of geek culture and sci-fi. There is quite a lot of conversation to play through – which is where most of these film references come to light – which could be a real chore, but thankfully the voice acting is of a very high standard throughout. Aside from the Clerks alumnus, the supporting players all perform admirably and create a nicely fleshed-out cast of geeks and stereotypes.

This accompanies the high standard of art in the title too. Characters are all big, bold sprites which – although perhaps simply animated – are full of character and certainly suit the story well. Coupled with detailed, hand-drawn backgrounds, this really is a love letter to traditional adventure games of old, showing that sophisticated 3D visuals aren’t necessary for a narrative and puzzle-driven experience.

While Randal’s Monday might not bring anything new to the table, it is a tribute to the golden age of point and click adventures. For fans of comic books and cult films, it’s jam-packed with in-jokes and references to look out for, and both the audio and visuals are very pleasing. This is all sadly let down by the nonsensical puzzles, where the solutions are far too obscure, meaning that even seasoned adventurers are likely to resort to the hint system. While you want to feel challenged by a game, it still needs to be fun and rewarding – not just one frustrating challenge after another.

Puzzles frustrate and confuse more than challenge.
Pop culture references could easily go over your head.

The concept and writing will draw you in, while at the same time the ridiculous puzzle design pushes you away.