previous
The Turing Test is coming to Nintendo Switch on February 7
random
next
Ancestors: A Humankind Odyssey is flawed but fascinating
55 comments 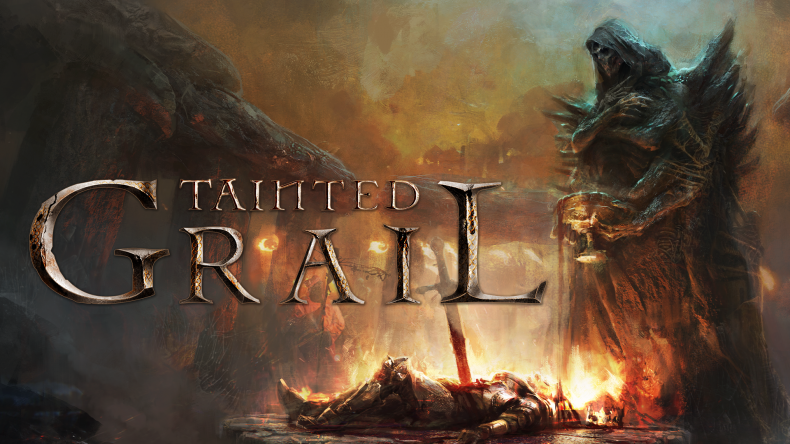 I played an alpha build of Tainted Grail, a grimdark RPG from Awaken Realms, based on the boardgame of the same name that was the most successful kickstarter campaign of 2018. In this dark wreimagining of ancient Britain, King Arthur is lost, the Knights of the Round Table are scattered or dad, and the land of Avalon is falling to ruin at the mercy of the Wyrd, a dark cloud of evil and madness covering the land. The nights are long and dark, crops don’t grow and everyone who comes into contact with the Wyrd goes insane. Only the power of the Guardian Menhirs, ancient edificies erected by the legendary wizard Merlin, hold the growing tide of darkness at bay.

With no more heroes left to fight, it falls to a handful of untrained souls to band together and save the land. It combines Baldur’s Gate style exploration and player choice with deck-building combat, and its dark, unforgiving world oozes with atmosphere. There’s no concrete release date yet, but this is an early build and there’s lots more info and additions to come. As it stands, Tainted Grail has heaps of potential and could be a surprise hit for Awaken Realms.

This early build has only two characters, the burly smith Beor denied his place with the heroes due to a mysterious wound, and Ailei, an outcast apothecary shunned by the townsfolk of Cuanacht. At present both characters are identical in all but appearance, though we can expect greater variety in characters, gear, cards and tactics when the full game finally comes to Steam later on in the year.

In the meantime, check out the video preview below to get a peek at the world-building, combat and gameplay on offer:

Tainted Grail will be available on Steam some time in 2020.

Senior Content Editor Mick has been playing games for over 30 years and writing about them for around 12. After drifting from site to site for a while, settling briefly at the now-defunct Made2Game and freelancing for the gone-but-not-forgotten NintendoGamer Magazine, he came at last to rest at Godisageek. Mick has been a reviewer, staff writer and content editor here for some time, while also moonlighting a little for Red Bull Games. He has 4 kids, has written 2 novels, and sometimes even manages to pay a bill or two. You'll usually find him defending the galaxy in Destiny 2, battling evil in Diablo 3, or lurking in the background on Twitter. Find him there @Jedi_Beats_Tank, or on XBL (JediWaster247), PSN (Jedi_Waster) or Nintendo (JediWaster).
MORE LIKE THIS
Preview

Story of Seasons: Pioneers of Olive Town’s chilled out farming is perfect on the Switch | Hands-on preview