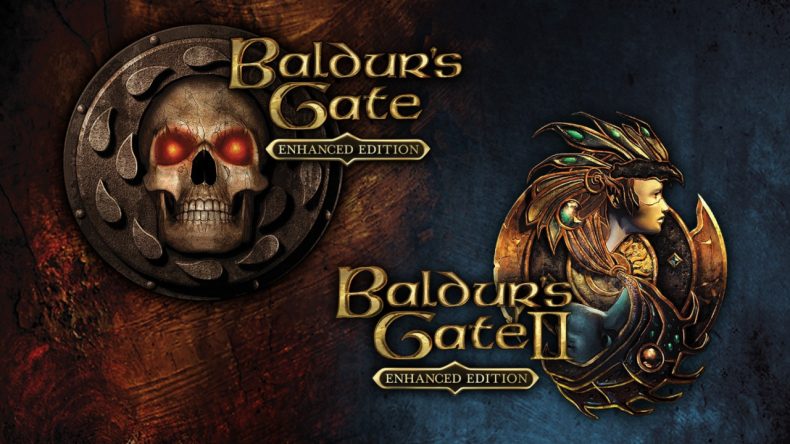 Baldur’s Gate is one of those mythical titles evoked whenever hardened games writers and RPG fans gather round the flickering embers of a midnight fire, to swap stories of the first games they fell in love with or to lament the often relatively poor state of today’s industry.

BioWare‘s seminal classic set the stall for franchises like Neverwinter, Divinity, Pillars of Eternity and their own Dragon Age. With the current resurgence in the popularity of Dungeons & Dragons, it’s the perfect time for Beamdog to port Baldur’s Gate over to current consoles and show us all how it used to be done.

The Enhanced Edition comes bundled with Baldur’s Gate and its sequel, Shadows of Amn, as well as the various expansions to both games. There is a huge amount of content to get through here, pushing way beyond the 100 hour mark if you’re intent on seeing everything both games have to offer. Be ye not mistaken though: despite the re-jigged UI, lick of paint, and HD character portraits, these are still 20-year-old games, and newcomers may need to adjust their thinking to accommodate. For example, you can opt to play in the new Story Mode, which makes the game a walk in the park, but veterans of the genre and fans of the franchise won’t play lower than the Normal difficulty, and the challenge hike is real. Purists may even choose to play by the true D&D 2nd Edition Ruleset, which is another thing altogether. You begin by creating your protagonist, which in itself can take a while. In time-honoured D&D fashion, it’s not as simple as just modifying a face and choosing a race. Each class has several variants which alter stats, abilities and equipment (a Ranger might opt to be a Beast Master, for instance, or a Thief could choose to specialise as an Assassin or Bounty Hunter). Each character has a moral alignment from Lawful Good to Chaotic Evil, which affects how they interact with each other, with NPCs and the world. Stats can be rolled, re-rolled and tweaked within their parameters and you can choose to be adept in certain weapons and techniques. Levelling is slow, and the gear you can use will have a bigger impact on how you progress than the numbers you’re chasing.

After creating your avatar you can also create an entire party of six. Although you’ll meet and recruit various PCs of all different classes, races and alignments as you play, this is my preferred method. I love creating characters that compliment one another, filling out the archetypes and building backstories. In Baldur’s Gate II: Shadows of Amn, creating your own party means abandoning the allies you would otherwise begin the game with, which means missing out on some brilliant characters like the warrior Minsc and his hamster, Boo, or the ever-loyal Imoen, but it’s a price you’ll balance for yourself. Both games are almost identical in terms of gameplay and aesthetics, so switching between them is easy (you can even export your characters if you want to). A mix of exploration, decision making and tactical combat, whatever you can’t solve with words and wits will come to swords and spells. The tactical pause allows you use the abilities and talents of each party member, with magic users summoning units to the field, and crowd controlling enemies, or thieves and assassins hiding in shadows to shake off threat and then backstabbing for increased damage. On lower difficulties you probably won’t care whether your paladin is turning the undead or your mage is hurling magic missiles or fireballs, but at Normal or above you’ll want to make the most of every available skill and advantage.

On the Switch’s small screen the lack of graphical flair is more forgivable than on a larger TV or monitor, but work has been done to make environments and spell effects more impressive. The UI, too, is optimised for controllers across both games, though some elements feel a little clunky and cumbersome. I’m sure there must be a universal template available somewhere for isometric party-based RPGs to make it easier, like the “Fish Sticks” set up for shooters. Exploration and investigation is a huge part of Baldur’s Gate, and you’ll want to make sure your party composition covers all the bases. Thieves, for example, can pick locks, detect traps and hidden secrets, or pick the pockets of NPCs. Bards and Paladins often roll high charisma, which means you’re more likely to have NPCs cooperate in conversations, while clerics can heal the party outside of combat and resting. You might try to play the entire two games with a party of barbarian savages, but you’ll have a tough time doing it.

Story plays a major part, which is a hardly surprising if you’re familiar with BioWare’s later offerings like Star Wars: Knights of the Old Republic or Mass Effect. The writing throughout both Baldur’s Gate games is excellent, with moral choices that will make you think and decisions that will have you second guessing yourself for a while after. It’s not fully voiced, so there’s some reading involved if you want the full picture in each instance.

Small niggles aside, the Baldur’s Gate 1 & 2 Enhanced Edition bundle is a great opportunity for anyone who missed these classics to see what all the fuss is about, and for anyone who, like me, spent a good chunk of their teen years immersed in BioWare’s genre-defining masterpieces.

The Baldur's Gate 1 & 2 Enhanced Edition bundle is a great opportunity for anyone who missed these classics to see what all the fuss is about.